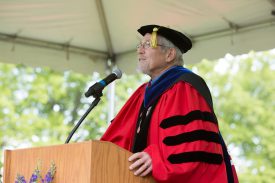 Convocation remarks by Executive Dean Bob Goodman on May 16 to the School of Environmental and Biological Sciences’ Class of 2016.

I am delighted to be able to greet you this morning on this wonderful occasion. The faculty and the members of the Cook community have watched you grow and blossom during your years at Rutgers. On their behalf, I offer our collective congratulations to you—the young men and women of the Class of 2016.

You’re part of something grand, graduating at perhaps one of the most highly anticipated moments in Rutgers history. There’s been an air of anticipation and feeling of ‘specialness’ attached to this class that graduates during our ‘Rutgers 250’ anniversary. You’re also special in a way that no other class can claim—whatever your politics—for having your commencement address be delivered by a sitting president of the United States.

You’re part of something revolutionary, connected to the beginnings of an institution established in 1766 when America was still a colony. You’re part of that vast continuum of students who, in those early days, soon became embroiled in the greatest civil strife in our land, to be followed almost a century later by the second major upheaval —Civil War in the 1860s, out of which emerged the public university system and the transformative land-grant program that underpins the great state universities in our country.

So, in addition to our deep history beginning as a colonial college, Rutgers and your school have over 150 years of history as a land-grant university.

I believe that our democracy is founded, and depends, on three fundamental aspirations: Knowledge, Engagement, and Civility.

I’m confident that your Rutgers education, which rests on a foundation of intellectual curiosity, experiential learning, diversity, and giving back, has prepared you for your role in civil society. You have gained, and indeed through your own research and scholarship, many of you have contributed to knowledge.

We have grounded you in knowledge and in tools for life-long learning. We have given you broad and deep access to all manner of ways to nurture engagement.

I want to focus for a few minutes on the second and third of these aspirations.

The Class of 2016 has distinguished itself through its leadership, its service to fellow students, and its engagement in campus life.

A few examples give us a glimpse into how in tune you were.

You undertook a major initiative under the Student Governing Council to put water fill stations in all the dorms on campus, as a way of decreasing the use of disposable plastic water bottles. This initiative will continue into the next academic year and beyond.

You were involved with alumni of the school in “Life-After-College,” a career and life-counseling networking activity that was as meaningful for you, the students, as it was for the alumni eager to help you launch successful futures, and as President Obama said, make wise choices

And, one of the members of your class, Sarah Waxman, served as a shining example for the school when she was honored at the Chancellor’s Student Leadership Gala, winning the Paul Robeson Renaissance Award, given to a student who, and I quote: “exemplifies excellence and truly embodies a commitment to leadership and involvement on campus and…in the community.”

Apart from responding to your own instinct to serve and lead, I believe in part that you are engaged as students because you’re a part of a School that is also deeply engaged and cares deeply about important issues.

Issues like climate change, which is perhaps the single largest issue facing your generation and your children’s generation.

Issues like nutrition, food, and health – and the challenge, on the one hand, of sustainably feeding the world’s population, projected to reach 9.6 billion by 2050…and on the other hand, of combating the chronic illnesses associated with obesity.

And we’re so committed to future generations that, even in difficult fiscal times, we invested in a signature new Institute for Food, Nutrition and Health. The first new campus building in 20 years, the institute is the academic and social anchor of our campus. But what truly distinguishes the institute is that it represents – in very concrete ways – our collective responsibility to finding meaningful solutions for human wellbeing.

Perhaps less explicitly–but every bit as important–has been your experience here in nurturing your skills in the area of civility. You have been in a place that honors civility.

In today’s world where civility as a fundamental aspiration in public discourse is being ignored or even violated, we can appreciate even more how essential civility is to a democracy.

It was deemed so important in contemporary society that significant resources and sustained academic attention has been placed on studying it. At the Johns Hopkins University through its Civility Project founded in 1997, and renamed the Civility Initiative. Its co-founder and now director Pier Massimo Forni, an immigrant Italian scholar, reminds in his recent book, Choosing Civility, that:

“Civility means a great deal more than just being nice to one another. It is complex and encompasses learning how to connect successfully and live well with others, developing thoughtfulness, and fostering effective self-expression and communication. Civility includes courtesy, politeness, mutual respect, fairness, good manners as well as a matter of good health.”

Of course, we learned our own lesson on civility through the tragic experience of Tyler Clemente in 2010.

I will likely not be here to witness all of your successes, but I believe the following words, attributed to an eminent physicist of the last century and Nobel laureate Richard P. Feynman, may offer a simple but powerful guide to our collective responsibility to the future.

The hard work, the critical analysis, the argument, and the healthy co-existence of conflicting ideas and world views can only prosper in communities, families, and nations where civility is an honored and observed value.

“We are at the very beginning of time for the human race. It is not unreasonable that we grapple with problems. But there are tens of thousands of years in the future. Our responsibility is to do what we can, learn what we can, improve the solutions, and pass them on.”

I thank you, our Rutgers revolutionaries of the future!