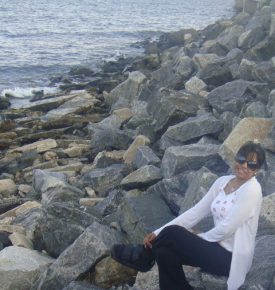 Graduating with a degree from Rutgers is an invitation into lofty intellectual circles. It is also evidence that the recipient of a diploma has braved the course load of his or her respective major. Saba Tabasoom, however, has braved much more over her ten-year college career. She graduated in January 2016 from Rutgers as a pre-med student with a degree in biology—and a letter of congratulations from assistant dean of academic programs Penny Carlson— the culmination of a journey that began at the Dhaka National Medical College in 2006, in Bangladesh.

Saba was in her first year of college and preparing to become a doctor, when a young man took interest in her. The man approached Saba’s parents to ask for her hand in marriage, which is common etiquette in Bangladesh. Yet, he quickly was discerned as a threat to Saba’s well-being. Seeing this, Saba’s mother heeded her daughter’s pleas and denied the man’s request to wed. The refusal frustrated him and his family also took it as disrespect. He began to stalk Saba and threaten her, often telling her he would throw acid on her.

To make matters worse, Saba was being blamed for refusing the man’s advances. It became her fault. In Saba’s culture, an arranged marriage is supposed to be a natural way for a young woman to meet her husband. The perceived insult from the Tabasooms couldn’t be undone. Saba’s family was blacklisted by Bengali society. Her father’s business went under. Saba no longer felt safe in her home, so in 2007, she made plans to travel to the U.S. to begin community college in April of that year. Her mother followed shortly thereafter.

Saba’s childhood heroes were her mother and Dana Scully from The X-Files. The paranormal TV show was part of her inspiration to become a doctor, but her mother remains her foundation. “She is very resilient,” Saba said. “She understands me more than anyone.” Both women influenced and strengthened Saba’s love for helping others.

The Tabasoom family is a loving one. Saba was born and raised in Bangladesh. She started at Rutgers in fall 2010, originally as a triple major in biology, nutrition, and public health, but was forced to take a semester off in 2011 after she broke her ankle. Saba graduated with a bachelor’s degree in biology in January.

“It was the experience of being disabled for the first time in my life,” she recalled. She needed help to open doors and the crutches became cumbersome. Around that time, her student loans ran out and a tragedy struck her family, forcing her to take another semester off. Even though she had made more progress towards her nutrition and public health majors, she needed to refine her focus to pre-med with a degree in biology.

After her ankle healed, she fell in love with hiking while on a spring break trip to St. Croix for the course, “International Relations: Leadership for Sustainable Development Practicum—Travel Seminar,” conducted by director of organization and leadership development, Mary Nikola. She met with government representatives of St. Croix, including Senator Kenneth L. Gitten. And, in St. Croix, Saba swam for the first time in her life.

“I had the chance to experience everything,” she said. This included snorkeling, kayaking and hiking near Maroon Ridge – all first-time activities for Saba. The course taught her the challenges facing developing nations as well as important relationship-building experiences. Her classmates became a second family to her, while Rutgers had become a second home. “When you are around positive people, you realize you are so much more than you think you are,” Saba said. She believes it helped to shape who she is today. 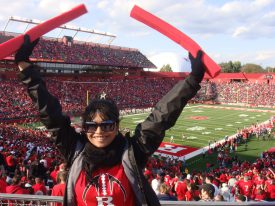 Saba is firm in her belief that the people she met at Rutgers became her family away from home. When her brother, Enamul, had run-ins with the law around the same time Saba had broken her ankle, she tried to get him into community college and worked for three years to expunge his record. Mentors and friends in the Rutgers community offered support during these trying times and kept her focused and her spirits high.

They were people like Mary Nikola, who became a second mother to Saba at Rutgers; lecturer Gina Suriano, who once drove over an hour to check on Saba; Diane Simmons, her advisor in CAPS, as well as LaToya Fendrick, her public health advisor. Not to mention her friends.

Nikola commented, “Saba has demonstrated exceptional courage and fortitude. Learning of her personal challenges is a reminder to me that students often have much more going on in their lives than is evident on the surface. Knowing Saba on a more personal level encouraged me to look for additional opportunities to facilitate her leadership growth and development.”

Saba has a strong and inquisitive nature. It has helped to develop her investigative medical methods, which she put to good use during her required SEBS internship under the tutelage of urologist Sheldon Rosenthal, in Brooklyn NY, where she currently works.

Saba is preparing to take the MCAT in June. She remains a passionate hiker and frequents New Hampshire to camp with her friends. No medical school commands her attention at this time, as she is very content with focusing on the MCAT and continuing her work under Dr. Rosenthal.

A legacy left at Rutgers is of no concern to Saba Tabasoom, despite the many hearts she has touched. She believes people helped her far more than she ever helped anyone. She is unaware that her perseverance and endless optimism are gifts. The professionals she has met along her journey are undoubtedly grateful for their encounters with Saba.