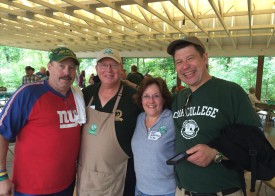 Many alumni support their alma mater with time, talent, and treasure. But few are as true to their school as David Earl, who started giving back to Rutgers shortly after his graduation in 1976 and has continued to this day.

David is a section chief in the Office of Landscape Architecture of the New Jersey Department of Transportation, where he has worked for more than 36 years. “I was one of the lucky ones,” he says, “I got my job because of my education at Rutgers, and I have been there ever since.”

Three years after David graduated, he dedicated his first small gift to the Department of Horticulture, home in those days of the landscape architecture program. His reason was simple: “I was grateful to have been prepared so well for a career I love,” he says.

In the mid-1980s he began directing his donations to a memorial scholarship set up by the family of classmate Kevin Dorko. David says that although he didn’t know Kevin well, he admired his zest for life. “Kevin loved active sports, like motocross. He liked to fly airplanes. When I heard that he died in a plane crash in ’83 and found out that his family created the Kevin Dorko Memorial Scholarship, I decided to donate to that,” David recalls.

Later, he opted also to support the Roy DeBoer Travel Prize, set up by the late Professor Roy H. DeBoer. DeBoer founded the landscape architecture program, taught the subject for nearly 50 years, and was chair of the department for 25 years. Roy “welcomed me into the landscape architecture program,” avid says. “He had the greatest influence in both my academic and professional careers. He cared for and guided many students. In my case, as my advisor, he would not let me fail and pushed me to succeed.”

The travel prize, set up while DeBoer was still teaching, to this day provides educational travel for students, a cause that was a passion for DeBoer. David became a booster of the travel award because of his admiration for DeBoer and his belief that students should have the opportunity to attend conferences and professional gatherings – “the professional meetings keep the connection going and keep alumni involved with students.”

Other gifts benefit the Department of Landscape Architecture’s general fund. “Since that was my major,” he says, “I wanted to support it, not just for scholarships but for discretionary purposes because money is always tight and departmental needs occur from time to time.” In addition, as an active member of the Cook Community Alumni Association, David contributes to the group’s own endowed scholarship. Although not a Rutgers graduate, David’s wife of 39 years MaryLou fully endorses his philanthropy and is a Rutgers donor in her own right. She is employed in Rutgers’ Department of University Communications and Marketing, which she joined in 1996 after working for several years in the public school system. Situated in the office of University News and Media Relations, she often quips that “if something happens – even if it happens on the other side of the world – we’ll get calls looking for experts!”

She and David have two children, David E. Earl Jr., who works with McMaster-Carr Supply Company in Robbinsville, N.J., and Amy Earl (CC’01), who earned her degree in biological sciences from the Department of Animal Sciences and works for the Carrier Clinic in Belle Mead, N.J. MaryLou and David jointly support the Department of Animal Sciences, partly because of their daughter’s degree, but mostly because MaryLou was quite involved in 4-H when the children were young and spent a lot of time on the Cook Campus interacting with the Animal Sciences faculty.

Both of them would agree that the departments and scholarships they support financially “are very personal to us and helped shape our lives and careers. Hopefully, they will have the same effect on the student beneficiaries,” who, in turn, will be “true to their school.”