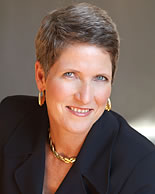 It’s part of her signature on personal emails: “Go RU!” She is a member of the university Board of Trustees, a regular at the games of the Scarlet Knights women’s basketball team, a familiar figure at High Point Solutions Stadium, “owns” a few greens on the Rutgers University Golf Course, was co-chair of the search committee for the new athletic director, and more – in short, “an avid fan of all things Rutgers.”

A person of indefatigable energy who recently returned from a bird-watching adventure in Cuba, Kate Sweeney believes firmly in staying engaged. As Kate puts it, “When someone asks me to do something, I hardly ever say no.”

With a successful, busy career as a senior vice president, financial adviser and portfolio management director with Morgan Stanley in downtown New Brunswick, Kate holds Certified Financial Planner™ and Certified Investment Management credentials and enjoys a roster of clients that includes many who are associated with Rutgers. 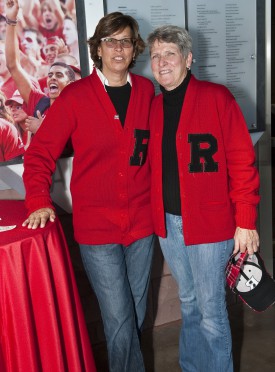 Kate, right, celebrates at the Varsity R Letterwinners Association festivities last fall with June Olkowski (DC’82), an All-American and the first women’s basketball player to have her jersey (Number 45) retired.

In 2012, she was named by the business publication, NJBIZ, as one of the top 50 Women in Business in New Jersey. To qualify, a nominee must meet selection criteria that include living or working in New Jersey and holding significant authority for decision-making in a for-profit company. An independent panel of judges selects the top 50 based on their dedication to business growth, professional and personal accomplishments, community involvement, and advocacy for women.

She gives back generously with her time and knowledge, conducting frequent financial workshops and seminars for undergraduates, MBA candidates, faculty and staff, and women’s groups, particularly the Institute for Women’s Leadership. She also was instrumental in achieving an endowed scholarship through the Rutgers University Bisexual, Gay, Lesbian, and Transgender Alumni Association, providing support for students in the LGBT community. For these contributions and more, Kate recently was the recipient of the Rutgers Loyal Sons and Daughters award.

Kate’s deep re-engagement with Rutgers began in 2001, when she moved back to New Brunswick after having been a financial advisor in Spring Lake Heights, New Jersey. At about that time, Rutgers was reorganizing its alumni organization, and Donna Thornton, vice president for alumni relations, invited Kate to join the initial board of directors of the Rutgers University Alumni Association. “The meetings were intense,” Kate recalled. “They would bring in Rutgers speakers to talk about a wide range of university programs and facilities. With each speaker, I found myself in awe, thinking ‘I didn’t know Rutgers did that.’” 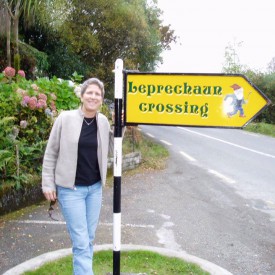 An avid traveler, Kate gets directions in Ireland.

Later, she approached Executive Dean Bob Goodman and told him she wanted to get involved in the workings of her school, so she was appointed to the Board of Managers of the New Jersey Agricultural Experiment Station and spent the next two years learning about Rutgers’ presence and impact throughout New Jersey.

Kate’s bachelor’s degree, earned in 1979, was in fisheries and wildlife management in what is now the Department of Ecology, Evolution and Natural Resources. Her journey from then to her successful career as a financial advisor, really began on Skelley Field, where the Rutgers women’s lacrosse team used to play its games.

The late Al Meredith, a faculty member who taught agricultural economics and marketing, had been a varsity lacrosse player during his undergraduate years at Rutgers and was still a local high school lacrosse official. He loved lacrosse and would stop to watch practices and games on Skelly Field. “Sometimes Al and I would chat, and over time we became friendly. I asked Al for career advice, and he declared that I would make a good stockbroker. So he put me in touch with a former student who was a stockbroker at E.F. Hutton, and I guess the rest is history,” Kate said.

Kate liked the financial world because, in essence, it put her in charge of her own life and livelihood. But “my major challenge was that I wasn’t very confident, especially when it came to public speaking. So I asked Al if I could speak to his class from time to time to improve my skills, and he, of course, said yes.”

“Eventually, Al called me up to say that he and his wife Doris had been following my career and they wanted to engage me as their financial advisor. That was in 1999, and I now work with his kids and grandkids. That is very special to me – to be able to work with three generations,” she said. 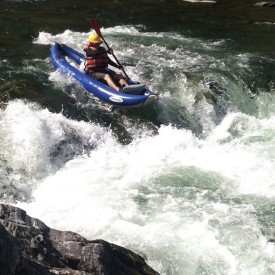 An active sports enthusiast, Kate rafts down the middle fork of the Salmon River in Idaho.

While a student, Kate was captain of both the lacrosse team and the Lady Knights basketball team. She earned three letters in each sport and recently was invited back to a special celebration of the Varsity R Letterwinners Association, where she was one of two featured speakers.

She talks passionately about the value of college athletics. “All sports require the same level of commitment,” she said. “You have two jobs – you’re a student and you’re an athlete. You learn to time-block, prioritize, communicate, and adapt to changing conditions. Athletics teaches you a lot that you can’t learn in the classroom.”

“We’re all going to have adversity in life, but when you’re an athlete, you have a strategy. What if a key player gets injured; how are you going to adapt? This mental agility is all important.”

As an afterthought, Kate said: “If I have two candidates for a job, I will take the athlete almost every time. They are high achievers. They don’t give up.”