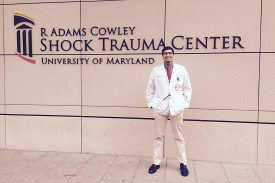 Dan Mascarenhas is pictured outside the Shock Trauma Center at the University of Maryland.

Like many first-year students, Dan Mascarenhas was unsure of his life’s course. In high school, he had volunteered with the Emergency Medical Squad (EMS) in his hometown of Moorestown, New Jersey, as a community service activity and gravitated to “the high intensity and personal dedication required to serve and help patients in need.”

So it seemed only natural that he would set his sights on medicine, especially since his mother is a physician. However, when he arrived on campus, he was reluctant to head in that direction, mainly because he had witnessed firsthand and “appreciated the daily sacrifices that physicians make in not only long hours, but also missed family time.”

Nevertheless, after Dan’s graduation in 2013, he applied to and was accepted into the University of Maryland School of Medicine and expects to receive his M.D. degree in May 2017.

“Coming into college, I was reluctant to pursue medicine but kept my mind open,” he recalled. “I decided on biotechnology as a major because of my interest in science, the field’s promise for employment and success, and the caliber of the program at Rutgers.”

Was it genetics at work when he changed his mind about medicine? Perhaps, but also influential was the life-changing experience of traveling to Oaxaca, Mexico, in a Rutgers Study Abroad program led by Peter Guarnaccia, professor in the Department of Human Ecology.

“Culture and Community Health in Oaxaca, Mexico” involves three main educational components: the anthropology of health in Mexico; a course in Spanish, with an emphasis on medical vocabulary and dialogues; and service learning activities in community and public health programs in Oaxaca.

Dan worked in a health clinic, Clinica del Pueblo, which served poor residents of the rural town and was staffed by specialists. “My role was to take vital signs and record patient information prior to their consultation, as well as to shadow doctors. I learned and recognized the importance of the doctor-patient relationship, without which care cannot be effectively given or received.” 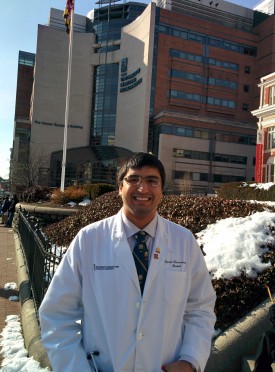 Proud alum Dan Mascarenhas wears the Scarlet R as he makes his rounds at the University of Maryland School of Medicine. Here he is pictured outside one of the university buildings in February 2015.

Dan also participated in a mission trip to Tanzania, organized by the Rutgers Catholic Student Association, as part of the group’s community service initiatives to help persons in need. “These trips helped reinforce the importance of the human-to-human interactions in not only healthcare, as was the case in Oaxaca, but also to a community,” Dan said.

“Often we get caught up in medical testing, technology, money, and we get distracted from the potential that people have to make a real difference in someone else’s life,” he continued. “These experiences helped shift my focus away from the lab-focused biotech and led me to pursue medicine. Medicine is the ultimate person-to-person service profession. It is that communion and service to each other that is most important.”

With his eyes now on medical school, Dan added a nutritional sciences major to his course load so that he could expand his medically relevant education. But there’s more. Even with a double major he was involved in the Rutgers Water Polo Club and the Catholic Student Association, and he continued to work on weekends as an EMT. He was in the SEBS Honors Program for four years, pursued a G.H. Cook Honors project in nutritional sciences, and graduated magna cum laude. He also spent two summers during his undergraduate years as a research assistant with the Children’s Hospital of Philadelphia in the Genetics Department.

At Maryland, he won a Carolyn L. Kuckein research fellowship from Alpha Omega Alpha national medical honor society to study blunt cervical spine trauma and how to adjust the triaging of these injuries to improve the decision-making between surgical and non-surgical management. Dan will travel to Miami and Chicago to present the findings of his study at annual radiology meetings. He said he currently is interested in surgery, emergency medicine, and radiology and is looking forward to next year, as it will “help me focus my interests because it will give me a chance to rotate through all the major disciplines of medicine to find out which parts of medicine I am interested in and which patient populations I am most eager to serve.”

He is secretary of the Surgery Interest Group, vice-president of the Trauma Interest Group, and treasurer of the Christian Medical Society. He also finds time to be a tutor with “A Bridge to Academic Excellence,” a University of Maryland program serving Baltimore middle school and high school students, and he volunteers as a mentor with the Johns Hopkins School of Medicine’s MERIT youth program, preparing students from low-income and minority communities to pursue a career in medicine.

Dan credits much of his choice of careers to his science education and research assignments at the Rutgers School of Environmental and Biological Sciences and the mentoring, leadership and humanitarian service skills he obtained here.

“Rutgers was a unique place and I was glad that I had the privilege to be a part of the Rutgers community. There are so many different subjects to potentially study, groups and activities to participate in, and a great diversity of students at Rutgers. College is not only about learning a subject and earning a degree, but about gaining a wealth of experiences that will help shape and guide you as you go on to do different things. SEBS was a great launching pad for me to learn more about myself, pursue my interests and set me up for future success.”