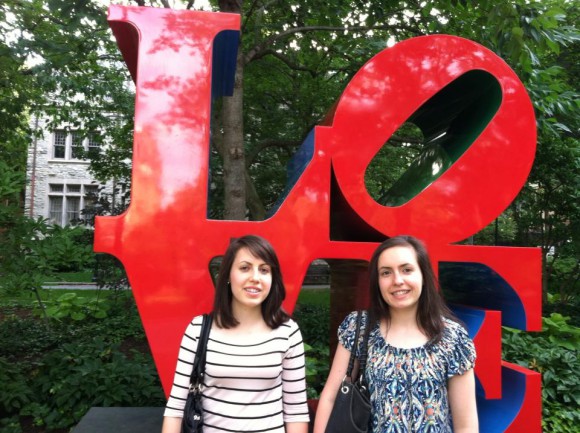 The next stop on the Davis twins’ academic journey is U of P in Philadelphia. Julianne Davis (l) and Caroline Davis (r).

For identical twins Caroline and Julianne Davis, after spending their pre-college years tethered by their unique bond, attending college was a chance to venture out on their own separate paths. Coincidentally, though, their paths ended up leading to the same place: Rutgers School of Environmental and Biological Sciences (SEBS). Now as graduating seniors in the Class of 2015 and seeking their own paths once again, they find that they are again led to the same place: the University of Pennsylvania pursuing graduate degrees. With their undergraduate years under their belts, the Davis twins have demonstrated that they are accomplished in their own right but indeed shaped by the intimate bond unique to identical twins.

Julianne and Caroline grew up in Bridgewater, NJ, and are very close to their parents Maria and Thomas. The Davis family shares an interest in food. Food science major and nutrition minor Caroline is a self-described foodie and is intrigued by the physical and biochemical interactions of foods, like multilayered candy bars, ice cream, and cheese. Biotechnology major and biochemistry and nutrition minor Julianne follows food blogs and conducts baking experiments by altering cookie recipes to make them healthier, learning to cook from her father and to bake from her mother. 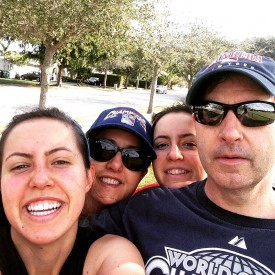 While their parents both work in finance, the twins have both found their passion in science. This is what landed them at SEBS, which also addressed their parents’ financial concerns about simultaneously paying two college tuitions.

Ironically, Rutgers was not the top choice for either sister.

Julianne remembers, “I visited many colleges within the northeast and none of them ‘set off fireworks’ telling me to go there. I decided that Rutgers was just as good as many of the other schools I applied to, plus it was conveniently close to home. I also realized that for my parents, it was definitely the best choice financially. I chose SEBS specifically because it had many options with regards to science majors and it felt more intimate than any of the other schools of Rutgers.”

Caroline admits she didn’t even want to apply to Rutgers until her dad convinced her. After getting accepted and attending an open house where she heard Undergraduate Director for Food Science Karl Matthews speak about food science, she was hooked. “After that presentation, I took a two-hour tour around the food science building with two food science seniors (Jen Komaiko and Mike Driver), and left feeling that the food science program here was the best fit for me. We did NOT plan on going to the same schools, that’s just the way the pieces fell.”

Julianne affirms, “Caroline and I made the choice to go to Rutgers independently, we made a deadline a week before the universal university decision deadline of May 1 to tell each other where we decided to go.”

How did they fare at SEBS? Caroline and Julianne are both George H. Cook Honors scholars and graduating with honors. Caroline is also an Aresty Research Funding Fellow. They have been officers in student clubs, and volunteered and mentored in student activities. They’ve run neck-and-neck with their 3.8+ GPAs. Julianne admits they’ve had a small competition going since freshman year on who will graduate with the higher GPA. “For the past few years we’ve been switching back and forth, but currently I’m in the lead!”

Balancing out their academic and social lives at the same school led to some interesting dynamics for the Davis twins. Since they were both science majors, they took many classes together. “We’ve been in at least one class together all four years at Rutgers. In General Biology it was particularly useful because during most lectures one of us would fall asleep for 15 minutes and miss 10 slides but still ended up getting the notes because the other person was diligently taking notes,” admits Julianne.

They’ve also been roommates for two of the four years, and this is where they more resemble the “Odd Couple” than identical twins. Caroline states, “I will admit that my sister is more organized than I am; she is very neat. My side of the room occasionally appears “messy,” however, it is really an organized mess because I can find everything that I need to find. We are looking forward to having our own rooms in the apartment in Philly so we can organize the room how we please.”

Caroline with her advisor George Carman, where she received an Honorable Mention at the 2015 Aresty Undergraduate Research Symposium.

And of course, campus life for identical twins must come with the inevitable incidents of mistaken identity or playing tricks on people. The twins reserved switching seats in shared high school classes for April Fools’ Day. They never managed to repeat the antics at Rutgers since April Fools’ Day always fell on an exam day. They have both had many encounters with people mistaking them for their twin and realizing half way through the conversation that they were talking to the wrong one.

This is not surprising as the twins are what Dean of Academic Programs Rick Ludescher describes as “really identical – it has taken me over three years to learn to tell them apart.”

Julianne shares, “One recent event that I’ll remember for a long time was during the G.H. Cook Honors Program dinner where Dr. Watford presented all the G.H. Cook scholars with a certificate of achievement. After my name was called I walked up there and said ‘Yup, that’s correct!’ He laughed and said ‘this is probably the first time I didn’t confuse the two of you.’ [Caroline and I took his Advanced Nutrition I class and sat next to each other during each lecture]. Later that evening all the G.H. Cook scholars that were Food Science majors took a picture together, and since Caroline couldn’t make the dinner I became “replacement Caroline” for five minutes!”

When asked to describe the special bond they have as twins, they reveal a concept familiar in both science and finance: a stable bond. Caroline explains, “I would say that twins are very special; you always have a best friend that can understand you better than everyone else. We’ve always got each other’s back; our motto is ‘no twin left behind’.” 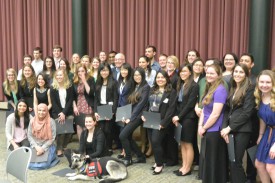 As the twins stand on the threshold of the next phase of their education, they easily recognize what they’ve gained from their undergraduate experience at Rutgers. Julianne reflects, “In the end it was the best decision I’ve made in my 22 years of life because Rutgers has helped me mature in so many different ways. I’ve matured in my writing and can have scientifically stimulating conversations with my friends as well as my professors. In general I’ve noticed my level of maturity at handling difficult situations or stressful situations is much better than it was before I entered college. One of the most profound traits that I’ve acquired from attending Rutgers was the awareness of global issues as well as national conflicts and the diversity in social-economic classes in the US.”

Caroline can point to specific influences. “Looking back, I would have to say that mentorship and helping others has contributed greatly to my development as a student, as a researcher and in general as a human being. Like my parents, my research advisor/academic advisor/mentor Dr. George M. Carman has always encouraged me to try my hardest because hard work leads to success. He has provided me with great academic guidance over the years as well as essential suggestions with respect to my research projects. However, it is the general life advice that has been the most important. He has told me a lot of little things, things that can only be learned from experience and therefore, have been very valuable to my development as a person.”

Caroline and Julianne Davis are both enrolled in biomedical Ph.D. programs at the University of Pennsylvania in the fall. Best wishes for continued success to the Davis twins!