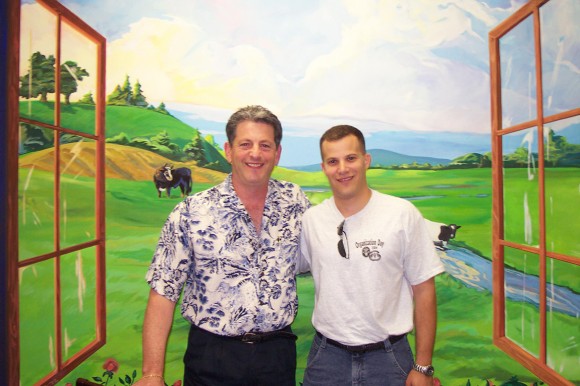 When Scott Willens was six years old, he started piano lessons and for a while aspired to going to Julliard. During his senior year in high school, he got a beagle puppy, and that changed everything. Still an accomplished musician, he is now Army Major Scott Willens, with a DVM with board certification in the American College of Veterinary Preventive Medicine and a Ph.D. in pharmacology.

Scott is a member of the U.S. Army Veterinary Corps, serving stateside and in places like Iraq and focusing on bio-security and developing medical countermeasures and knowledge solutions to chemical and biological agents.

The Army established the Veterinary Corps in 1917 to support the Cavalry when the U.S. became involved in World War I. “Now the mission is public health and preventive medicine,” Scott noted, “along with providing veterinary services for military working dogs and Navy marine mammals, pet care for military families, and laboratory support for research and development.”

When Scott volunteered to go to Iraq in 2007, he was the veterinary advisor with an embedded provincial reconstruction team (ePRT), one of many teams of civilian and military specialists who worked with provincial leaders and communities to build local capacity for agriculture, public health, education, economy and rule of law.

He worked with agricultural interests in Babil Province near Baghdad to establish a comprehensive, full-service Central Euphrates Farmers Market and also had the opportunity to work with veterinary personnel at the Baghdad Zoo. After six months in Iraq, he returned to his home base of Maryland, where he continues biomedical research and also maintains clinical skills through relief veterinary work in a small animal private practice.

How Scott’s life evolved makes for an interesting story:

Scott was born in Englewood, N.J., and throughout his grade school and high school years was trained in classical music and performed in solo, chamber music and orchestral appearances. But after graduating from Tenafly High School in 1988, he realized that medicine, rather than music, was his career path, and he enrolled in Rutgers to pursue an education in animal science. He graduated in 1992 with high honors. Larry Katz, professor and current Director of Rutgers Cooperative Extension, was his George H. Cook Honors Program advisor, and the two have stayed in touch over the years.

According to Scott, “I chose Rutgers, and specifically the Department of Animal Sciences, largely because my dad had gone to Cook (his father, Leonard, is Ag ’63) and my mother to Douglass (Dana, Class of ‘65). The animal science program was rigorous, but it offered so many pre-requisites for veterinary school that it prepared you for almost any vet school in the country.”

Scott enrolled in the University of Minnesota’s College of Veterinary Medicine “and the first year was easier for me than otherwise because of the excellent undergraduate training I received.” He graduated in 1996 and returned to New Jersey to work in small private practices in northern New Jersey for two years. Then Mystic Aquarium in Connecticut offered him a one-year aquatic animal clinical and research internship, an opportunity that matched his strong interest in aquatic animal medicine from his veterinary school days.

“I had wanted to be a marine biologist as a kid, but unless you are Jacques Cousteau or his son, it isn’t quite as sustainable,” he laughed. But Mystic was his “stepping stone” to a PhD in pharmacology at North Carolina State University College of Veterinary Medicine in Raleigh, N.C. His dissertation research focused on skin absorption models of pesticides in amphibians.

“One thing I did not think I was going to do was to go into research. I thought research was for people who didn’t want to do the clinical work. I didn’t realize how important research is to clinical and environmental issues. I still do clinical, but the PhD program proved that research could be interesting and engaging.”

While he was at NC State, September 11 happened. At a candlelight vigil on campus a few days later, Scott said he was overwhelmed with the thought that “this was our Pearl Harbor moment. You can choose to act or not, but I felt it wasn’t everyone else’s responsibility to protect me. I walked over to the ROTC office to request a meeting with a recruiter. I was commissioned on December 18, 2001.”

Thus began Scott’s military career. He still continues part-time in a private veterinary practice “to keep my skills up, and I still get to do some research-related clinical care and surgery for the Army.” Currently he works in the Chemical and Biological Defense Program, focusing on the global health security agenda, biosurveillance, countering multi-drug resistant bacteria, and supporting the efforts of Operation United Assistance against the Ebola outbreak in Western Africa.

What about Scott’s musical ambition? Well that didn’t go away, either. He performs at military functions; he was a national finalist in the Military Idol competition in 2005; he sang the National Anthem and God Bless the USA at the American Veterinary Medical Association convention in July 2007 (he was in Iraq at the time, so he did it by recording) and again in 2013; and he is in the rock band Til September, which has raised more than $15,000 for scholarships for the children of men and women who have been killed in the line of duty.

And if that isn’t enough, he is husband to Melanie and father to two daughters and a son in a household that includes a Great Dane, a Chihuahua (“for the irony of it”), two horses, “fish all over the house, geckos, a ball python, a cockatiel – it’s a zoo!”