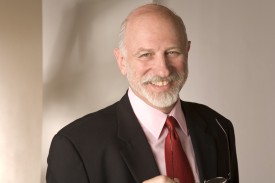 As part of the honor, Mark was invited to the G.H. Cook Campus recently to deliver a presentation in connection with the department’s Common Lecture Series. During that visit, he reflected a bit about his days at Rutgers and how it came to be that he pursued landscape architecture, a field in which he has excelled professionally.

To put his story in context, think about his graduation year – 1970. The first Earth Day was celebrated in April of that year, marking the beginning of the environmental movement in the United States. Demonstrations against the Vietnam War and Cambodian incursion led to turmoil throughout U.S. campuses and the shooting deaths of four students at Kent State University.

In New Brunswick, the Kent State killings caused massive student unrest. An accreditation team, visiting Rutgers to evaluate the landscape architecture program, was greeted by President Mason Gross and a mass of students demonstrating outside Old Queens and threatening to take over the building.

As the late Roy DeBoer, head of the landscape architecture program at the time, recalled matter-of-factly in a departmental history: “Despite the turmoil, the visit went very well, and we were granted the normal initial accreditation….” In fact, the visit and evaluation helped propel the department to new heights.

It was this atmosphere that surrounded Mark when he graduated in landscape architecture in the spring of 1970, and it nurtured a revolutionary way of thinking in the field of architecture and in his personal philosophy.

Mark went on to earn his master’s degree from the Harvard University Graduate School of Design and soon joined The Architects Collaborative in Cambridge, Mass., one of the early innovators of the interdisciplinary approach to architectural assignments. The Architects Collaborative would assign a team to each project, working collaboratively to ensure each element of the project complemented the others. While this was new methodology in architectural design in the 1970s, it is widely acknowledged and practiced these days.

Indeed, when The Architects Collaborative closed its doors in 1995, Mark joined Symmes Maini & McKee Associates in Cambridge, a firm that emphasizes a multidisciplinary model and deep collaboration. Mark is a principal of the firm and director of landscape architecture and planning.

He also is chairman of the Brookline, Mass., Planning Board, an appointed board whose first chairman was none other than Frederick Law Olmsted, Jr., best known for his work in Washington, D.C., and with the national park system. Quoted in an article about the Planning Board, Zarrillo noted that he was “honored to sit on the planning board that he [Olmsted, Jr.] started.” 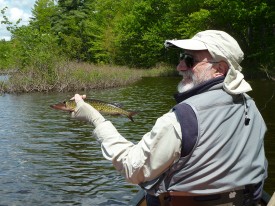 Zarrillo at a favorite spot on Kezar Lake, ME.

Calling on his early training, Zarrillo’s initiative was to participate in design advisory teams when major impact projects are proposed, a move that is especially important in a town like Brookline, which is built out and surrounded by Boston. Each new project has to satisfy community interests related to open space, historic preservation, affordable housing, and more. This taps into his various areas of expertise, such as planning, sustainable design, LEED applications, as well as his basis in landscape architecture. After the design advisory team’s work is completed, they make a recommendation to the Planning Board and the Board of Appeals.

The interesting thing is that Mark hadn’t planned to go into landscape architecture when he entered Rutgers in 1966. He had always been good in math and science, so he had decided to pursue a degree in chemistry at Rutgers. That was, until his first chemistry exam with the traditional “blue book.” “The exam had three questions, and I didn’t have any idea what the professor was asking. I guess it was the ‘culling of the herd’ – academically speaking,” he said.

Searching for another major, he observed that his big brother in Alpha Chi Rho fraternity, who was a landscape architecture student, “was having a great time with his studies and enjoyed being an artist. So I switched disciplines, and never regretted not pursuing chemistry.”

Classes were exciting sometimes. Mark recalled that he and the late Steven Strom, a classmate and later a landscape architecture professor, were on College Farm one day doing a surveying lab with Kurt Nathan, a now-retired engineering professor who taught site engineering. “We climbed over a fence into one of the pastures to set up a plane-table and our transit. Just as we were ready to get started, we turned around only to spot a huge pig charging us. Steve and I jumped the fence, but Kurt ran into the field and scooped up the equipment to rescue it,” Mark recalled.

Years later, Steve and Kurt rewrote the textbook, “Site Engineering for Landscape Architects,” which was illustrated by Kate John-Alder, a current faculty member.

Mark also appreciates the fact that, unlike landscape architecture programs at other universities, Rutgers’ department emphasized science courses. He was able to take such classes as soils, geology, biology, plant science and astronomy. When he graduated, his was a bachelor of science degree, which, along with his science background has served him well, both in his career and “especially in graduate school when knowledge of the natural sciences is required for new methods of remote sensing and analysis.”

He also is appreciative of the faculty he encountered, particularly department head DeBoer. He recalled that Professor DeBoer was very approachable, and at a critical juncture, intervened for Mark when he was having a problem with one of his courses. He also helped Mark get his first job at the Monmouth County Parks Department.

Another professor, Nicholas Dines, who came to Rutgers to teach for one year. As a new graduate of the Graduate School of Design, he was very influential in illuminating what landscape architects could achieve. He eventually moved to the University of Massachusetts-Amherst to teach but stayed connected with Mark and was Mark’s sponsor at his induction in 1997 as a Fellow in the American Society of Landscape Architects (ASLA). Julius Fabos, another Rutgers alum teaching at UMass, was chair of the nominating committee. He also was supportive of Mark’s selection from the Boston Chapter of ASLA.

Clearly, Mark’s connection with his alma mater is strong. And the feeling is mutual. His 2014 Outstanding Alumnus Award presentation on campus – “Praeteritum, Praesens, Futurum: Correct the Past, Direct the Present, Discern the Future” – was well-received by students attending, who stayed after to connect with Mark. Thus, the wheel goes around to a new generation of revolutionaries.