On the eve of her induction into the Women’s Basketball Hall of Fame in 2013, Sue Wicks was interviewed by Mechelle Voepel of ESPN.com. She was asked how she felt about playing basketball as a professional with the New York Liberty of the Women’s National Basketball Association (WNBA). Her answer:

“It was the communication – not just with my teammates, but the other team, the officials, the fans. I don’t have the words for how magical that felt. That flow, the energy … how it all becomes one thing.”

“When people say, ‘Do you miss playing?’ I give a short answer: ‘No, I played enough.’ But I do miss that flow. It was holistic; it was everybody inside the arena who were part of the whole package.” Susan Joy Wicks played basketball for Rutgers from 1984 to 1988 and was a dominant force in women’s collegiate basketball. She was a Kodak All-American and Atlantic 10 Player of the Year in three successive years, an Atlantic 10 Tournament MVP, U.S. Basketball Writers Association Player of the Year, a member of the gold medal-winning American team at the Pan American Games in 1987, the Naismith Player of the Year in 1988, recognizing the country’s best female player, and much more. She holds Rutgers records in various aspects of the game, and the scoring (2,566 points) and rebounding (1,357) are records for a male or female player at Rutgers.

Sue recalls that she had several choices for college, but “I visited Rutgers and knew this is it. I trusted my gut. Even though Rutgers was huge, I felt at home in the cozy, tiny Cook Campus.”

Part of what made her time on campus special was Dean Lee Schneider (CC ’70), “who was one of the most important and influential people in my life. He was so skilled at mentoring and advising. Eternally optimistic, he believes you can always fix it, you can always get back on track. You could fill a stadium with the people he influenced.” 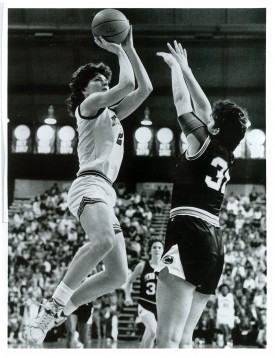 “He still remains important in my life”, she said. “To this day I still get a phone call from him – ‘what are you doing; how are you doing?’ Your success means the world to him. He is someone who believes in you.”

After her college career, she played in Europe professionally, when in 1997 she joined the New York Liberty in its inaugural WNBA season (and still managed to play in Europe during the off-season). She played with the Liberty until 2002, was the team captain, a WNBA All-Star, and was considered a fan favorite. She and her team went to the WNBA Finals four times during her career, and she is especially proud of having won the WNBA Kim Perot Sportsmanship Award.

Sue was inducted into the Rutgers Basketball Hall of Fame in 1994, and is one of only two Rutgers women’s basketball players to have her jersey – No. 23 – retired. She came back to Rutgers in 2005 – the same year she was inducted into the Rutgers Hall of Distinguished Alumni – to become an assistant coach under head coach C. Vivian Stringer. The following year she left to become an associate head coach for the women’s basketball team at St. Francis College in Brooklyn.

In her interview with ESPN.com she mused about what she would say in her acceptance speech because of the diversity in her college and pro careers. She was quoted: “At Rutgers, they’ll remember me as a great scorer. With the Liberty, I was a role player who focused on defense. And in Europe, I was something else between those two.

“And as for myself, I always just loved to play. Whether I was star of the team or a role player, it felt the same in a lot of ways. The energy of being on a team meant something to me. Especially as I got older, I felt it more intensely.”

Her new role is as co-founder of Fight 2B Fit, Inc., described by Bloomberg Businessweek as a web-based youth education program that allows users to create teams and compete in fitness programs. It is targeted to youth clubs and schools, and one of the participants is none other than a school in Center Moriches, N.Y., where she was born.

She explained to ESPN reporter Voepel that she is especially concerned about children who face many obstacles in establishing physically healthy lifestyles because, in some cases, schools have cut back on physical education, or the children may come from inner-city areas where there are few safe places outside to play.

She says she is drawn to children who don’t participate in sports. “The ones you can tell who don’t even feel comfortable in their bodies. I want them to know that health and fitness belong to them, too. Or the kids who, as they get older, stop participating. Maybe they try out for a team and get cut, and then they more and more think of themselves as not athletic, and they give up all those benefits of being active.”

Back on Long Island, the Center Moriches Middle School just finished its second season in Sue’s Fight 2B Fit program, and one of its students was recognized as a 2014 National Champion in the Fight 2B Fit challenge. Sue reports that the youngster was honored at Center Court at Madison Square Garden during a Knicks game. “There is great symmetry here!” she notes.