As an adventurous young man, Ratemo Michieka left his home in Kenya to travel to the United States and to Rutgers to study agronomy, attracted to the university “because of its excellent reputation” even as far away as East Africa.

As the story goes, his parents were peasant farmers who used the income from their farm to educate him. His father told the then 10-year-old Ratemo that the only way out of the village was to get a good education. Ratemo worked briefly for a bank after high school but soon made his way to New Brunswick, where he earned his B.S. in 1974 in agriculture, a master’s degree in agricultural education and vocational technical agriculture, and a Ph.D. in weed science.

He recalls: “The courses I took in agriculture and environmental sciences were – and still are – the most appropriate and applicable in many countries and, especially, in Kenya where natural resources are vital for the world community. That was well known in East Africa. Many faculty here have benefitted from a Rutgers education.

“The training I received at Rutgers still stands the test of time,” he says. He fondly recalls his academic supervisors, the late professors Richard Ilnicki and Cecil Still as well as professor emeritus Roger Locandro, who along with their wives, Helen Ilnicki, Delores Still and the late Marylyn Locandro, helped him feel at home.

Ratemo Michieka currently is a professor with the University of Nairobi and the former director general of the National Environmental Management Authority (NEMA) in Kenya. He also was the founding vice chancellor (equivalent to president) of Jomo Kenyatta University College of Agriculture and Technology, located outside of Nairobi.

He is the Chairman of Council of Kenyatta University; he has written a scientific book on East African Weeds; and he has published Back to the Future: An Autobiography of a Distinguished Kenyan Scholar, Vice Chancellor, and Director-General. He also continues to conduct research, write articles for local and international journals, and train master’s degree and doctoral students for his country. 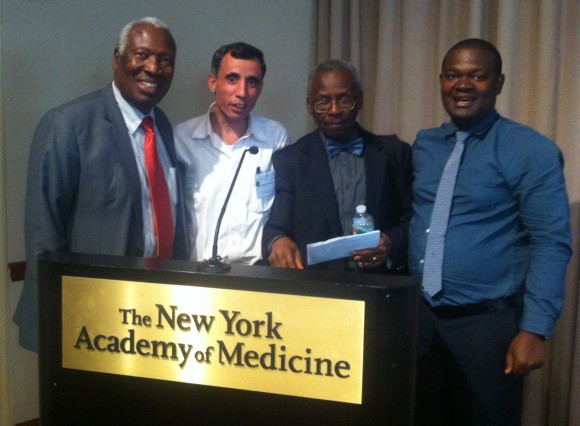 He was inducted into the Rutgers Hall of Distinguished Alumni in 2003. In a nomination letter to the Hall awards committee, Roger Locandro recalled that “just before receiving his Ph.D., Ratemo was asked if he would be interested in staying in the United States to work in his field. His reply was ‘I have a strong desire and responsibility to return to my country and share my education with my people.’”

And share he did – as a teacher, researcher and administrator and as a leader in education and agricultural and environmental policy in Kenya and throughout eastern Africa.

While he headed NEMA, he is credited for his passionate warnings about the dangers of environmental pollution and natural resources degradation and was responsible for the production of Kenya’s first report on “The State of Our Environment.” His research in weed science focused on appropriate management systems, water conservation, and food security. His studies in the testing of herbicides assisted in the recommendations of various weed control methods to farmers in East Africa and beyond. He is a strong proponent of using safe pest control management systems to avoid environmental pollution.

Ratemo is a member of several national and international organizations and has received many awards within his own country and internationally. Just recently, he was one of the invitees to the inaugural U.S.-Africa Leaders Summit in Washington, DC, an initiative of the White House and U.S. President Barak Obama.