Editor’s Note: In celebration of the 150th anniversary of our designation as the land grant institution in New Jersey, alumni are invited to tell their own Rutgers “story.” Mark Gregory Robson holds four Rutgers degrees – a B.S. (1977) in Agricultural Science from Cook College, a master’s (1979) and Ph.D. (1988) in Plant Science from the Graduate School-New Brunswick, and an M.P.H. (1995) in Environmental and Occupational Health from the School of Public Health. Here is his story, in his own words. 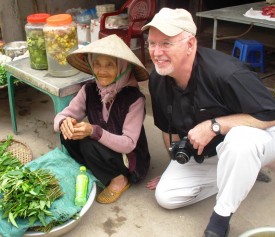 My first exposure to Rutgers came as a kid at home on the farm. Robson’s Farm was a typical small family farm with 35 dairy cows, 3,000 laying hens and about 140 acres of vegetables and field crops. Our county agents were regular visitors to our farm. My brother, sister, and I all became members of the Meadow Clippers 4-H Dairy Club. Through 4-H, I started going to functions on the Cook Campus, State 4-H camp and other parts of Rutgers. All of this exposed me to the Rutgers College of Agriculture and Environmental Science (CAES).

I applied to Rutgers in 1972 and came as a freshman in 1973 at the newly formed Cook College. I ended up living on campus in Helyar House, due to the influence of my neighbors, the Hlubiks. All six Hlubik brothers went to Rutgers, and all were part of the Cooperative Living Group, Helyar House or its predecessors: Patrick, Michael, Gerard, Raymond, Joseph, and William. Joe was my classmate, Joe went to Michigan for his Ph.D. and then went to Penn State as a faculty member. Later Joe became a Catholic priest and is now the pastor of St. Andrew’s parish near my home. Bill, the youngest brother, is the Rutgers Cooperative Extension Middlesex County Agriculture and Resource Management Agent.

When I arrived in August 1973 it was a new adventure for me. I had never lived away from home. I spent my whole life on our family farm, and I was quite fearful. Helyar House used to have an initiation “ride” that new members went on, it was an awful thing. We were awakened in the middle of the night and dropped off God knows where. It is there that I paired up with my eventual roommate, Peter McGurk, to find our way back. We ended up roommates for the next four years. Peter went to graduate school in Chicago, and I stayed on here at Rutgers. I was an Ag Science major with the teacher education option. That way I could teach high school level agriculture. I thought it was good to have a backup plan.

Rutgers had some truly amazing characters in the old days – professors like Dr. Norman Franklin Childers, who passed away just last year at 100 years of age. He was a one of a kind. He had three big Cadillac cars, had been married eight times, authored nine different textbooks, some in their sixth and seventh printing, and he had travelled the world. His classes were always interesting, if not entertaining.

Then there was Dr. Joseph Steckle, or as we all called him, Uncle Joe (behind his back, of course). Dr. Steckle wore a checked Ivy-style cap and drove a red Corvette with the license plate SOIL. I remember one of my Landscape Architecture classmates making a fake plate for his car that said DIRT. There were so many faculty who were really dedicated to their craft of teaching. It was not until later in my own career that I learned how good these folks really were at what they did and how much they cared. I think that is what made Cook a very special place to learn.

I taught for one semester to finish the year for a teacher who went out on sick leave at Hunterdon Central High School. I returned that summer for my M.S. degree under Bruce Hamilton and scored a one-of-a-kind assistantship: I was the Presidential Gardener. 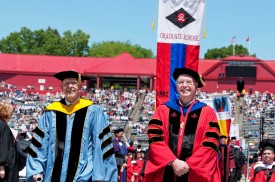 Mark Robson and Jerry Kukor lead the 2013 Rutgers Commencement  procession at High Point Solutions Stadium. Mark has served for many years as a commencement marshal.

In reality I was in charge of the grounds at then-Rutgers President Bloustein’s house on River Road. I really did not know Dr. Bloustein very well, but his wife, Dr. Ruth Ellen Steinman and I became good friends and remained friends until her death. Years later, Ruth Ellen would invite my wife and me to the house for functions, and I was in awe of being surrounded by corporate leaders or distinguished professors. I had the privilege this year of delivering the Bloustein-Steinman Memorial Lecture at the Edward J. Bloustein School of Planning and Public Policy.

I finished my master’s and was given an assistantship through Cooperative Extension to work for Prof. Ernest Christ, the Extension Pomologist. Ernie was one of the most decent and generous people I have ever encountered in my 60 years. The plan was to complete my Ph.D. and then hopefully succeed him in his position when he retired.  That did not happen but in the end it was OK. I was appointed Extension Pesticide Specialist when Dr. Ray Kriner retired and Dr. Jim Dill went to University of Maine.

These were good years, and I still plugged away at my Ph.D. I finally finished in 1988, nine years after my master’s. While still a graduate student I also briefly worked at the New Jersey Department of Environmental Protection and the New Jersey Department of Agriculture. I returned to the new position of executive director at the Environmental and Occupational Health Sciences Institute (EOHSI) on the Busch Campus to work under Dr. Bernard David Goldstein.

Dr. Goldstein is the smartest and most productive person I have ever encountered. He did not finish high school but was a freshman at the University of Wisconsin at 14 and a medical student at NYU at 19. He is amazing and has been my role model for most of my career, benefiting greatly from the example he set as an administrator, researcher, and teacher. While I was at EOHSI I decided to pick up an M.P.H. degree and also became a board-certified toxicologist.

I stayed at EOHSI until 2001. I was on a trip, and when I returned I found that I had been nominated to be the Chair of the newly formed School of Public Health’s Department of Environmental and Occupational Health. I had not applied but my name was sent in, and I ended up heading the department. I was Chair until 2006 when Executive Dean Bob Goodman invited me to “come home“ to SEBS and NJAES, first as director for the New Jersey Agricultural Experiment Station and then as Dean of Agricultural and Urban Programs. Dean Goodman has been very generous in allowing me to develop my international programs and be part of his leadership team.

I have been active in pesticide research in the U.S. and internationally. I had NIH funding to set up a Fogarty ITREOH Center in Bangkok for Southeast Asia, and I currently have a USAID grant to develop graduate programs in the Philippines. I am also teaching courses in Agroecology, Global Health, and Environmental Health, and my students are a source of great pride to me.

In 1977, I met Patricia Ann Mykalosky, another horticulture graduate student. We were both TAs in Landscape Plants course. We were married in June 1979, and so after 35 years we are still married and still very committed to our alma mater.

It has been a good 42 years. As a student I had good teachers, and as a teacher I have had exceptional undergraduate and graduate students. I am truly grateful for my time here at Rutgers.