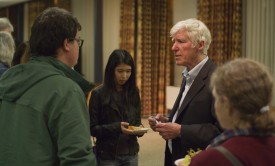 Lester Brown (right) talks with Rutgers students after his 2013 visit to campus for a lecture and book signing.

It’s one thing to see a problem. It’s another to doggedly advocate for – and provide – solutions. That is what sets Lester R. Brown apart from the crowd, the “ability to influence policy prescriptions for addressing global challenges.”

When Lester Brown was tapped for induction into the Rutgers Hall of Distinguished Alumni, the citation noted: “The Washington Post described Lester R. Brown as ‘one of the world’s most influential thinkers,’ and the Calcutta Telegraph called him ‘the guru of the global environmental movement.’”

The Indian newspaper’s description was particularly appropriate, given that in 1965 Lester, on assignment to India by the U.S. government, saw the signs of a looming massive crop failure in the country and was able to marshal American food-relief assistance to avert a crisis.

It was Lester’s roots as a farmer that, no doubt, helped him see the potential crisis. He grew up in South Jersey on his parents’ farm, and even as a young man established with his brother a thriving tomato-farming business that paid his way through Rutgers’ College of Agriculture to earn a bachelor’s degree in agricultural science in 1955. Shortly after graduation, he spent six months in India through a youth exchange program where he came to realize the relationship between the country’s burgeoning population and the shortage of food he observed when visiting families during his stay.

It was later, after he had secured a job with the U.S. Department of Agriculture (USDA), that he returned to India and by alerting U.S. authorities to the impending food crisis, was credited for preventing what could have been a global disaster.

Lester’s keen observation has been his great strength. As a young unknown analyst with the USDA he first drew significant attention to food instability in 1964 with his book Man, Land and Food. U.S. News and World Report featured an article – “Why Hunger is to be the World’s No. 1 Problem” – based on the book. The article said, “For the first time, a careful study of world food supplies has been matched with the facts of expanding world population.” It was this ground-breaking study that launched Lester’s career as “one of the great pioneer environmentalists.”

His office describes Lester’s current work: “Never one to focus only on the problem, he always proposes pragmatic solutions to stave off the unfolding ecological crises that endanger our future. His plan to save civilization – Plan B – has four components: stabilize population, eradicate poverty, cut carbon emissions 80 percent, and restore the economy’s natural support systems, including forests, grasslands, and fisheries.”

Lester Brown has written 51 books, published in 42 languages. In addition to the Hall of Distinguished Alumni designation, he has received numerous other awards, including a MacArthur Fellowship, the United Nations Environment Prize, and 25 honorary degrees.

He was recently on the G.H. Cook Campus to talk about his latest book, Breaking New Ground: A Personal History, which includes a chapter, “Ag Science at Rutgers.” He was interviewed by Rutgers Magazine and Public Broadcasting station WHYY in Philadelphia, and he engaged students, faculty and staff in a delightful “fireside chat” conducted by Rutgers professor Joseph Seneca.