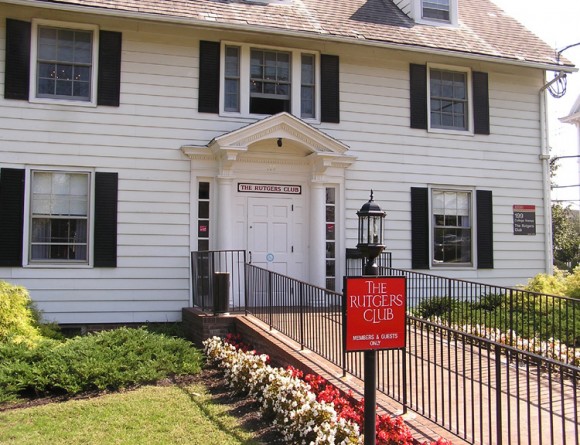 The Rutgers Club at 199 College Avenue.

When Joe Charette (Cook ’77) came back to Rutgers in 1989 as an associate director with Rutgers Dining Services, one of his responsibilities was the charming white house at 199 College Avenue – the Rutgers Club, a gem of a gathering place for more than 50 years.

Now executive director of Dining Services since 2011, Joe readily admits that the Rutgers Club is “near and dear to his heart.” In fact, every Mother’s Day he takes his wife Debbie and his mother Marion to the Rutgers Club for its legendary buffet. “I travel a considerable distance to get to the Rutgers Club, where I could just eat locally. But Debbie and my mother insist on the club because it offers two seatings, so there is no waiting in line, and the food is great,” he says.

If you travel down College Avenue, just before you get to the sign pointing to the ramp to Route 18, you will see it on the right side of the street with a front walk flanked by wrought iron railings and festive rows of flowers. The house was built in 1915 and was privately owned until 1956, when it was purchased by the university. The club was established the following year.

Originally called the Rutgers Alumni Faculty Club, the facility boasts more than 1,200 members – alumni, faculty, staff, students (age 21 and over) and friends of the university. The club employs three culinary school-trained chefs and is managed by Ray Martin, Jr., whose 40 years of experience in the restaurant business includes a dozen in fine dining establishments.

Joe Charette hired Ray Martin and also most, if not all, of the chefs who have worked at the Rutgers Club. Joe also has been on the Executive Committee since 1991. 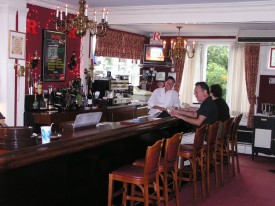 Todd Hunt (r) at the bar area of the Rutgers Club.

Longtime board officer and member Todd Hunt, professor emeritus in the School of Communication and Information, is a regular at the club and for many years had an office on the third floor “in what used to be a child’s bedroom when the house was privately owned.” It was in this office that he founded and presided over the Retired Faculty Association, and he has been instrumental in creating the Retired Faculty & Staff Association and the new Retired Faculty & Staff Center in Administrative Services Building II on the G.H. Cook Campus.

Todd recalls that Mason Gross was president when Todd came to Rutgers in 1968. “Everyone knew that President Gross would frequent the club, and so they would stop in to chat with him informally. A lot of business was done that way in those days.”

Between Todd Hunt and Ray Martin, dozens of officials and celebrities are recounted as visitors at one time or another. The publisher of the New Brunswick Home News would drop by; governors Kean, Byrne, Whitman, McGreevey and Corzine were guests, as well as Rosie Perez, Beyonce’s father, “and several famous writers,” Todd recalls.

The menu is light, sophisticated, and the dishes are generous and reasonably priced. The wait staff are all students, and they are paid $8.25 an hour, considerably more than servers in most eating establishments, subsidized by the service charge that appears on the check. “The students are permitted to accept gratuities and are most appreciative when that happens,” Ray says.

Membership costs a mere $25 a year, and you are not required to be a member to stop in for breakfast and lunch weekdays or for dinner Monday through Thursday. In addition, the club offers several special events each year such as a casino night, a chef’s demonstration with audience participation, a Valentine’s celebration, Mardi Gras festivities, New Jersey Hall of Famer Bucky Pizzarelli and his swing music, and more. These events are reserved for members and their guests and sell out quickly. Also, only members can reserve the various function rooms in the club, ranging in capacity from 10 persons to about 70, and purchase beer, wine, and spirits.

A history of the club – accompanied by a gallery of recent and fascinating old-time photos – is found on the Rutgers Club website.