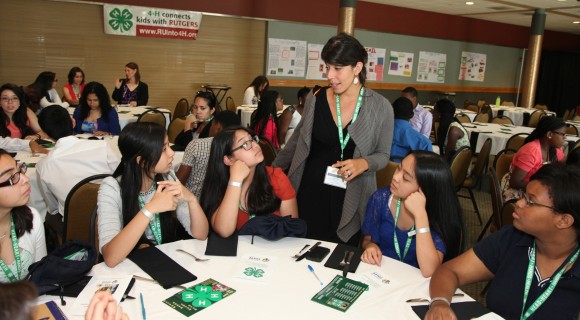 Participants gather before the start of the closing luncheon for this year’s Rutgers Summer Science Program.

The sixth annual Rutgers Summer Science Program, sponsored by Samsung, held its closing luncheon on July 11 at the Neilson Dining Hall on the George H. Cook Campus in New Brunswick, wrapping up a weeklong campus enrichment experience for over 60 high school students, grades 9 to 12, from across New Jersey. This year’s cohort was drawn from Essex, Mercer, Middlesex, Passaic and Union counties.

It’s hard to imagine when you experience this smoothly-run luncheon for the teens and their families, complete with student poster presentation lining the walls of the dining hall that this pre-college residential program for teens from underserved communities across New Jersey did not exist six years ago.

Chad Ripberger, Rutgers 4-H agent from Mercer County, co-founded this program with his colleague Janice McDonnell, 4-H SET agent, creating an active, hands-on science, technology, engineering and math (STEM) environment for youth in a campus setting. Following a week of activities, taught by Rutgers faculty and graduate students on a range of topics, the teens return to their local communities as newly-minted Ambassadors, armed with a number of skills that they will pass on to other youths in their home communities.

“The participants have agreed to a minimum of 50 hours of service to their local 4-H program, working with 4-H staff in their community to provide science-focused after-school and summer programming to younger youth and children,” said Ripberger.

For many of the teens, the Rutgers Summer Science Program is the first time they have ever stepped on a college campus much less spend a week immersed in college-type learning experiences. In addition the teens gain important skills, by working side by side with Rutgers scientists and engineers, said Ripberger. “The program was intended to expose them to a range of potential STEM disciplines and help prepare them for eventual college careers.” 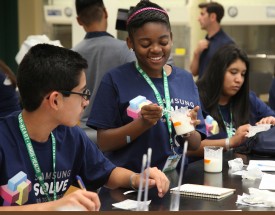 Students participate in the “Cooking with Bacteria” class, which was held in a first-floor lab in Foran Hall.

In 2013—four years into the program’s existence—it received a significant boost through a partnership with Samsung, in which the company provided scholarships to the program attendees and donated technology. The just-concluded luncheon marked the end of the second year in which Rutgers Cooperative Extension’s 4-H program has collaborated with Samsung to host this program at the university.

“Along with providing scholarships to enable a growing number of students to attend the enrichment program, Samsung provides cutting edge technology, like the Galaxy Note 10.1 tablets that the students used to track data from their experiments,” said Ripberger.

This year, the students participated in activities that included cooking with bacteria, developing mobile apps and mapping the effects of storm damage from Hurricane Sandy on local trees and wildlife, captured in this video produced by Samsung.

McDonnell, who co-leads the program, was responsible for recruiting the Rutgers faculty and graduate students who instructed and mentored the students over the course of the week. A long-time educator whose passion is to communicate the importance of the ocean and its relevance to our daily lives, she particularly liked the “teach-backs,” that segment that comes towards the end of one week of instruction and educators get to see what the students have learned.

“The teach-backs are about extending what the students learned to their communities and helping them to “teach” others about STEM fields,” said McDonnell during her remarks at the luncheon. 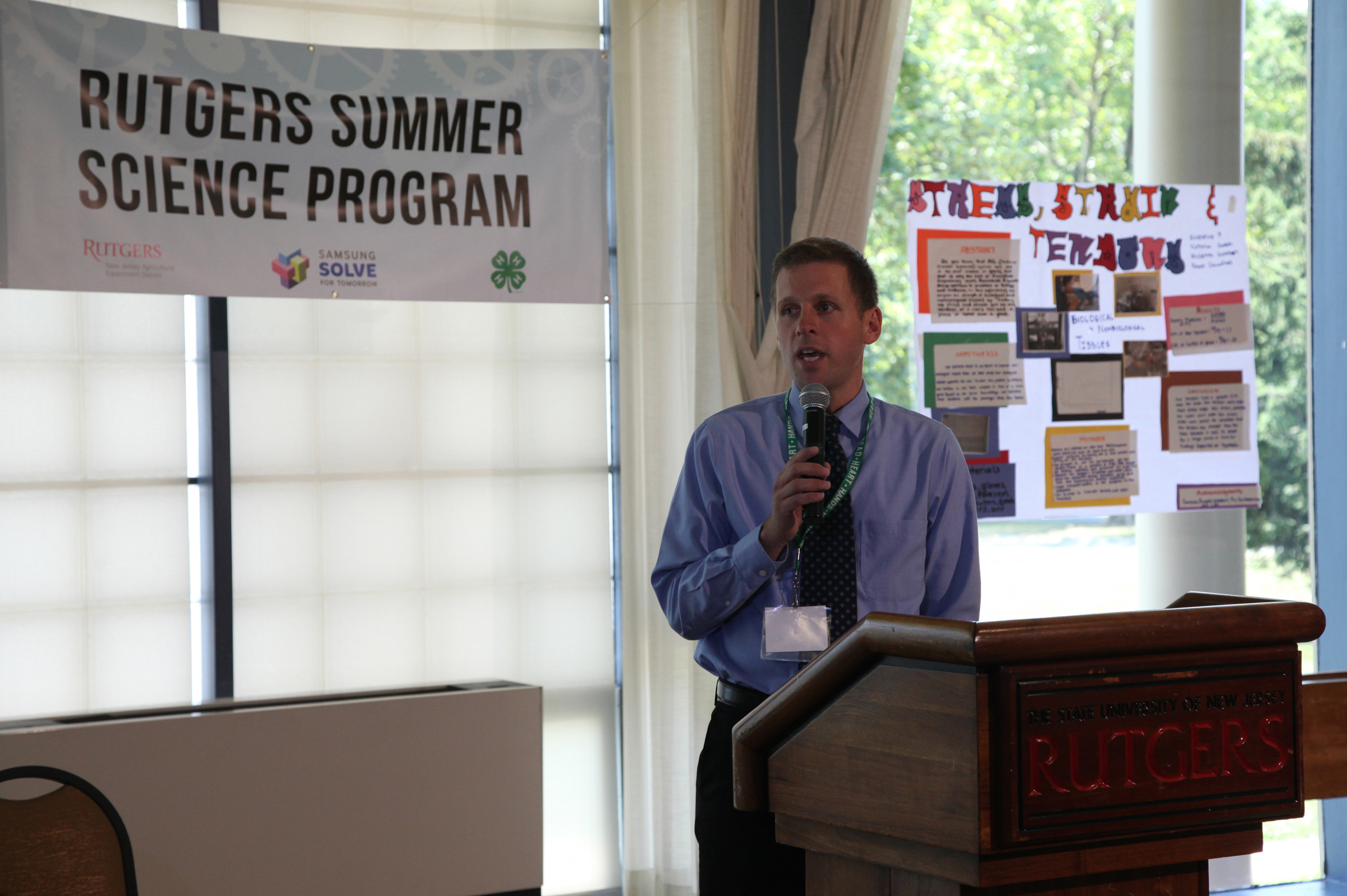 Executive Dean of the School of Environmental and Biological Sciences Bob Goodman addressed the participants and their parents immediately after lunch, sharing the story of his unusual path to becoming a dean that started with his participation in 4-H as a youth growing up in a rural New York State.

He underscored the importance of the Rutgers Summer Science Program, highlighting 4-H as “a pathway to learning about science and technology.” He recognized McDonnell and RCE colleagues, including Rachel Lyons, acting chair of the Rutgers Department of 4-H Youth Development.

Goodman also praised Samsung’s second year of sponsorship of this annual summer science program, calling it an “investment in science and technology.” He told the students that “it’s important to recognize the deep, rich technology dependency of our lives—even if you never become a scientist.”

Ann Woo, director of corporate citizenship at Samsung, delivered brief remarks to the attendees. “Samsung is committed to raising the level of excitement around STEM education,” she said, adding that Samsung believed in the value of giving back and being involved in the communities in which they are located.

Woo announced two Samsung STEM scholarships, a new initiative this year. Each scholarship is worth $2,500 and is awarded to one male and one female, who have previously participated in the program and who are 4-H Science Ambassadors in their home communities. The scholarship winners were Michael Scott of Trenton High School, a three-year participant in the program who will be pursuing Nursing at the University of Virginia, and Aliya Blackwood, a two-year participant from Paterson High School, who will attend Carnegie Mellon to pursue a degree in computer and electrical engineering. Blackwood, a longtime member of 4-H, thanked Rutgers 4-H and Samsung “for nurturing future scientists” through the program and for helping teens focus on something “that they’re passionate about.”

Closing out the luncheon for the third year in a row was the capstone speaker Navarrow Wright, who is described as an “expert on how the convergence of technology, the Internet, mass media and social media can change lives, businesses and society.” Wright spoke to the teens of the need to take advantage of the digital opportunities available to them in programs like the Rutgers Summer Science Program.

In his address enlivened with slides, he challenged the teens with the question, “What does it mean to be a 21st century leader?” He urged them to “ask the hard questions,” “stand out from the crowd” and “go against what’s popular.”