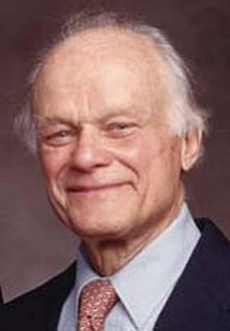 In its 2012 obituary chronicling the life of F. Herbert Bormann (Ag ’48), the New York Times recounted an interview with his widow, Christine: “Mrs. Bormann recalled that on their honeymoon she and her husband had passed the towering smokestacks of the smelters of a giant Canadian nickel mine. There was not a tree in sight; the landscape was denuded. ‘What on earth happened here?’ Dr. Bormann asked.”

The answer, it turns out, was later termed “acid rain,” an “environmental horror” that Bormann and his team of scientists discovered in the 1970s in the White Mountains of New Hampshire. He was a co-founder of the Hubbard Brook Ecosystem Study in the White Mountain National Forest, which has been a major model for the ecological and biogeochemical research of terrestrial ecosystems since its origination in 1960.

Bormann, who was born in New York City and grew up in Westwood, N.J., received his bachelor’s degree in agricultural science from Rutgers in 1948 and a doctorate in plant ecology from Duke University in 1952. He taught at Emory University and Dartmouth College before joining the faculty of Yale University’s School of Forestry and Environmental Studies in 1966, retiring in 1992. He remained the Oastler Professor Emeritus of Forest Ecology and a senior research scientist until his death on June 7, 2012.

According to an account in the Yale News, he and his Yale colleague Gene Likens “discovered that, as in Europe, rain and snow at Hubbard Brook were acidic. In a paper published in Science in 1974 they showed that acid rain was a widespread problem in the Northeast. The results were published in the New York Times, and his testimony on acid rain aided Congress in writing the Clean Air Act” of 1990.

The Times goes on to say that “the scientists traced the acidity to sulfur dioxide emissions and various nitrogen oxides from faraway smokestacks,” leading to reduced forest growth and fish kills in the Northeast.

Later in his career, Bormann, whose research examined the relationship between humanity and the natural world, co-authored the book, “Redesigning the American Lawn: A Search for Environmental Harmony,” which took issue with Americans’ practice of maintaining manicured lawns as costly, impractical, and ecologically damaging.

Bormann wrote more than 200 papers and numerous books. In addition to being inducted into Rutgers’ Hall of Distinguished Alumni, he was among the youngest faculty to be elected to the National Academy of Sciences; he was elected to the American Academy of Arts and Sciences; he was president of the Ecological Society of America; and he received numerous national and international awards and prizes throughout his career and until his death at the age of 90.