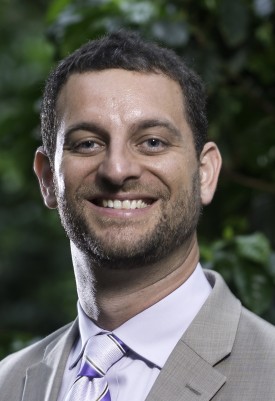 The Architect of the Capitol, the unit that administers the United States Botanic Garden, announced last week the appointment of Ari Novy, Ph.D., as executive director of the Garden.

Novy’s connection with Rutgers goes back to 2006 when he began working as a graduate research fellow. He received his doctorate in 2012 from the School of Environmental and Biological Sciences’ Department of Plant Biology and Pathology. His dissertation director was Jean Marie Hartman of the Department of Landscape Architecture, where he also served as a teaching assistant.

In his new position, Novy is responsible for leading and planning day-to-day operations and major programs at the U.S. Botanic Gardens.

“Dr. Novy is a plant biologist with a wide range of expertise in plant science and an amazing passion to educate people about the importance of plants,” said Stephen T. Ayers of Architect of the Capitol and acting director of the U.S. Botanic Garden. “His vision and leadership will move the Garden’s mission forward in exciting ways.”

Novy came to the Garden in 2012 as the public programs manager and was promoted to deputy executive director in 2013. He also holds an appointment as research collaborator with the Smithsonian Institution, National Museum of Natural History, Botany Department.

The U.S. Botanic Garden describes itself as “a living plant museum that informs visitors about the importance, and often irreplaceable value, of plants to the well-being of humans and the Earth’s fragile ecosystems.” It originally was envisioned by George Washington and was established in 1820 by the U.S. Congress, which continues to support it. It is administered through the Architect of the Capitol.

According to its website: “For the 21st Century, the U.S. Botanic Garden has committed itself to sustainability, educating the public about ways to live by supporting the interconnected web of life that is the environment, and in particular, by nurturing the plants that support life on our planet.”