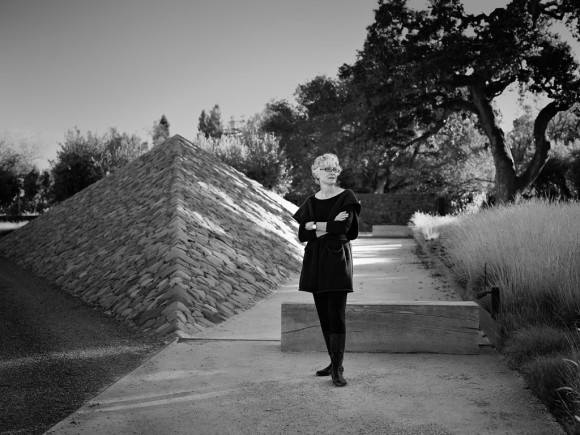 Editor’s Note: In this series of alumni accounts prepared by the Office of Alumni and Community Engagement, a thread that binds them is the recurring reference to the enormous transformational impact our students have experienced during their days at Rutgers. This is one of those stories.

It is June 2014. The year is just half over, and Andrea Cochran (CC ’76) already has received two very important honors for her work as a landscape architect: a 2014 National Design Award, conferred by the Smithsonian’s Cooper-Hewitt, National Design Museum, and a 2014 Design Medal from the American Society of Landscape Architects.

These are merely two of a long roster of impressive awards and honors that Andrea and her firm Andrea Cochran Landscape Architects of San Francisco have garnered in the last dozen or so years.

Her work has been extolled by her industry, by media, by clients, and even in a monograph published by Princeton Architectural Press. Last year, she was featured in an article in LAYER, the magazine of the Department of Landscape Architecture in the School of Environmental and Biological Sciences.

The National Design Awards program, which “celebrates design as a vital humanistic tool in shaping the world,” noted that “Andrea Cochran Landscape Architecture is distinguished by its emphasis on the experiential and material quality of the built landscape. Sustainability is central to the practice, and each project is instilled with a sense of intimacy and strong attention to detail.”

An entry in the monograph, Andrea Cochran: Landscapes by Mary Myers describes her work: “A garden by Andrea Cochran is a designed space where visitors find ease amid contradiction. Sharp angles contain flowing space, and severe geometries are softened by the delicacy of slender branches and rustling leaves.”

How Andie, as she calls herself, came from growing up in northwestern New Jersey to worldwide acclaim in her field, is a fascinating story.

“I wanted to go to art school but my parents told me that when I graduated from college I had to support myself,” she recalls. “They didn’t think I could do this as an artist so I decided to pursue a career as a veterinarian.  I chose Rutgers for their program in Animal Science.

“When I arrived on the first day of school, I thought I would be able to sign up for my Animal Science classes, but I found out that you were supposed to pre-register during the summer.  By this time, all of the freshman chemistry labs were full. I went to the dean’s office in tears with my parents, and I thought my life was over. The dean recommended that I take my Animal Science class the following year and take a one-credit survey class called Perspectives on Agriculture and the Environment. This class, he explained, featured guest lecturers from various disciplines.

“I followed his advice, and one of the speakers that year was Roy DeBoer, the head of the Landscape Architecture program. He introduced me to landscape architecture as the study of natural sciences and art. The following semester I took Environmental Design Analysis 101, and I enjoyed this class so much that I never took an Animal Science course and changed my major to Landscape Architecture.”

After graduation, she attended graduate school in Landscape Architecture at Harvard University, then went to work for a firm in Cambridge, Mass., that did landscape projects in the Middle East. She lived briefly in Athens, Greece, working for a firm that belonged to a Saudi Arabian architect. Wanting to return to the U.S. in 1981, she took a chance and relocated to California where she joined a firm in San Francisco, The Planning Collaborative (now located in Berkeley). Her employer was another Rutgers graduate, Jeffery Grote (RC ‘66).

She summarizes her journey from simply wanting to study art to the present this way: “Landscape architecture has been a pathway for me to be an ‘artist of the land.” It has been a way for me to combine my interests and craft a career in the arts and the environmental sciences.”

We highly recommend taking some time to view the breathtaking images of her designs on her website.