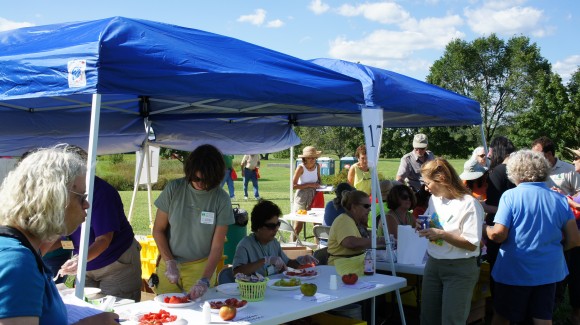 The ever-popular annual Great Tomato Tasting at Snyder Farm continues to grow and expand, and this year there will be more to experience than ever. Hosted by Rutgers Snyder Research Farm  in Pittstown, the event will take place on Wednesday, August 27 from 3 to 7:30 p.m.

In addition to the 80 varieties of tomatoes to taste, activities will include a chef’s cooking demonstration and tasting, guided educational wagon tours of the farm’s research plots, tastings of various fruits and herbs, access to the farm’s gardens with opportunities to ask questions and get answers, insect displays, information booths on various foods grown in the Garden State, and much more.

And for the first time this year, visitors will be able to walk a turf labyrinth, which is growing at the farm. 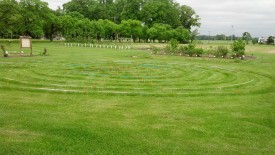 A labyrinth will be featured at the Great Tomato Tasting.

The labyrinth is an innovation of the Great Tomato Tasting planning committee, whose chair, Nick Polanin, agricultural agent of the Cooperative Extension of Somerset County and state coordinator of Rutgers Master Gardeners, describes. “While we have had a corn maze at past events, this is the first turf labyrinth we have ever offered. Although both maze and labyrinth depict a complex and confusing series of pathways, the two are different. A maze is a complex, branching puzzle that includes choices of paths and direction, while a labyrinth is unicursal, that is, it has only a single, non-branching path, which leads to the center.

“In ancient times, a labyrinth was considered a trap for mean spirits. In some places it is depicted as a path for ritual dances. In medieval times, it took a more spiritual notion of the difficult path to God and holiness, and traversing the path of a labyrinth was thought of as going on a pilgrimage. Later on, the religious connotation was lost, and it took the form of entertainment, while more recently there has been resurgence in its spiritual aspect and people get into a meditative mood while going through a labyrinth.”

Even if you’re not in a meditative mood, you will enjoy all that there is to see and do. And do stop by the special flower bed showcasing the Rutgers “R” and “U” in red flowers to commemorate the 100th anniversary of Cooperative Extension across the nation.