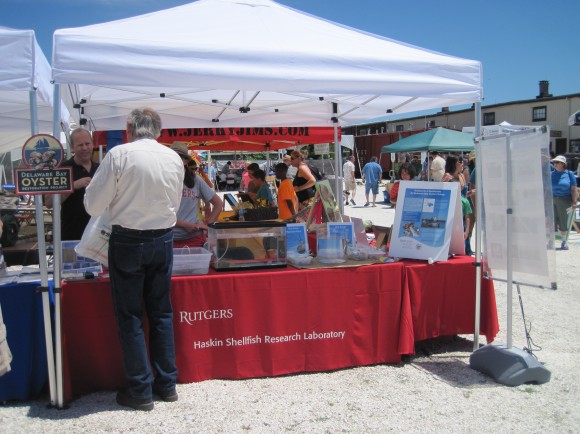 Delaware Bay Day, the free folklife festival celebrating the Bay and the Bayshore region, was held on June 7 in Bivalve, Port Norris and East Point, NJ. Hosted by the Bayshore Center, the festival which is dubbed “Food, Fun & Fireworks in Bivalve, NJ,” offered a number of fun activities and historical displays, including educational exhibits like the Rutgers Haskin Shellfish Laboratory.

The Haskin Lab, which is located in Port Norris, has participated in this event every year, showcasing to the Bay community its extensive research fisheries and aquaculture science, especially on species of commercial importance to New Jersey.

Associate Professor of Marine and Coastal Sciences David Bushek, who directs the Haskin lab, looks forward to interacting with festival goers and sharing the science conducted by the lab, including disease diagnosis, genetic analysis and shellfish seed production. 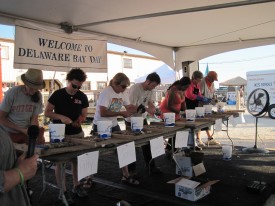 L-R, Patricia Woodruff; Jenn Gius; Danielle Kreeger, Science Director for the Partnership for the Delaware Estuary; Kevin Sykes; Jane Galleto, President of Citizens United to Protect the Maurice River and its Tributaries, Inc.; an unnamed local resident; and Tony, a volunteer for the Bivalve Center at Bivalve, all participate in the neighborhood oyster shucking contest at the Delaware Bay Day festival.

According to Bushek, Haskin Lab employees also take the time to have fun, helping to judge the New Jersey Championship Oyster Shucking Competition, which is New Jersey’s nationally sanctioned oyster shucking contest for professionals. “Members of the Haskin Lab only compete in the neighborhood shucking challenge; we’re not up on our shucking skills to participate in the professional challenge,” Bushek jokes.