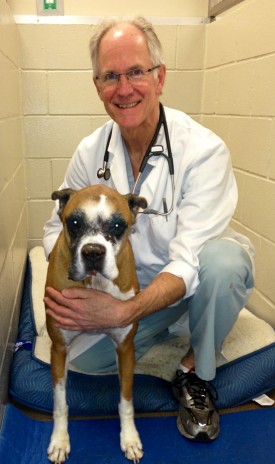 Stephen Birchard with Billy, a patient

In 1983, Stephen Birchard, DVM, joined the faculty of the College of Veterinary Medicine at The Ohio State University, and 31 years later he continues to be passionate about teaching. Only nowadays, his classroom has no walls, as it is located on the blog he started, Veterinary Key Points, for practicing veterinarians.

While at Ohio State, he received the Norden Distinguished Teacher Award (1985), the Omega Tau Sigma Fraternity National Gamma Award for distinguished service to the veterinary profession (1994), the John Lyman Jr. Award for Clinical Teaching Excellence (2006), and the Excellence in Teaching Award (2008).

So far, all of this seems pretty conventional for a guy who followed a traditional path of education and teaching. But today, not so much. Today, he is on Facebook (Dr. Stephen Birchard, Veterinary Continuing Education), and he runs his educational blog for veterinarians and consults part-time with practitioners. [One can visit his blog, but be aware that it is geared for trained professionals and some of the images are not for the squeamish.]

His transition to the social media world was, in his words, “not a difficult leap at all. As a faculty member at Ohio State, I was working with students in their 20s and 30s. It was pretty obvious that the way to reach them was increasingly becoming through the social media. Having children in college at the time also helped, although they initially thought it was pretty weird that their dad had a Facebook page.”

Stephen’s clinical specialty is small animal soft tissue surgery. His research interests are in oncologic surgery, general thoracic surgery, portosystemic shunts, and chylothorax. He has written numerous articles for refereed journals and book chapters and has conducted many clinical research studies. He is the chief editor of the Saunders Manual of Small Animal Practice, a comprehensive clinical reference book covering all important medical and surgical diseases seen by small animal veterinarians, co-edited by Dr. Robert Sherding.

Stephen credits his early experiences at Rutgers with many of his scholarly achievements. 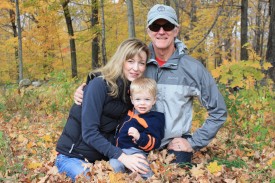 “I view Rutgers as an integral part in my personal and professional development,” he says. He especially credits three professors at the time – “Drs. Grun, Tudor and Weathers. Drs. Grun and Tudor were veterinary role models and advisors, and Dr. Weathers was my George H. Cook Scholars Program professor.

“Dr. Weathers and I did a research project on temperature acclimation in bullfrogs, which I thoroughly enjoyed and learned from. He taught me the basics of experimental design. I used that knowledge countless times in my research at Ohio State. The experiment taught me that things do not always go as planned in the world of research. But the project resulted in my first scientific publication – Weathers WW, Birchard SJ: The effect of temperature acclimation on the circulatory responses of “winter” bullfrogs to temperature, published in The Physiologist in 1972.”

Stephen’s dedication to learning, teaching and practicing his profession stems from his childhood. He says, “I knew I wanted to be a veterinarian since about age 10. After seeing the movie “Old Yeller,” I was convinced that I wanted to be involved in a profession that helped animals. Rutgers was the logical choice for a pre-vet program [Stephen grew up in Pennsauken]. My older brother Tom is also a Rutgers grad, so that was a factor in my decision as well.”

Firmly rooted in the Midwest, he doesn’t get back to the Cook Campus very often, but he occasionally sees his Rutgers classmates at veterinary conferences and seminars. “I am very proud of saying that I am an alum of a great university,” he says. “Some of my students at Ohio State did their pre-vet at Rutgers, and we would frequently share experiences and stories. It was fun to have that bond with them and a connection to my former college.

“I’m looking forward to seeing Rutgers play Ohio State in football this year. It’s a bit of a dilemma for me in terms of allegiance and who to root for. I suppose I could just wear all scarlet, since it is one of the colors of both teams!”