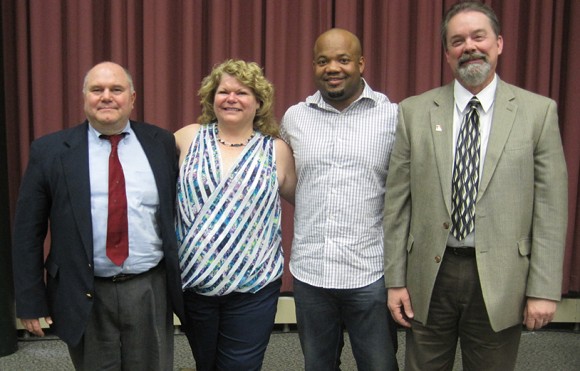 The George Hammell Cook Distinguished Alumni Awards and the Dennis M. Fenton Distinguished Graduate Alumni Awards for 2014 have been bestowed on five graduates – three with undergraduate degrees and two with doctoral degrees – by the Cook Community Alumni Association.

The winners are Gary Brackett (Cook ’03), Hank Ebert (Cook ’79), George Hamilton (GSNB ’85), Bethany Rocque-Romaine (Cook ’83) and Wei-Hua Wu (GSNB ’92). All, with the exception of Dr. Wu, came back to the George H. Cook Campus for a ceremony in the Cook Campus Center on April 27, 2014. They were joined by family and friends as well as students from the School of Environmental and Biological Sciences and Douglass Residential College, who were honored by Alpha Zeta fraternity and the Cook Campus and Douglass College parents’ organizations.

As part of the ceremony, the awardees shared their thoughts with the assemblage.

Gary Brackett, an Indianapolis businessman who spent nine seasons as a defensive player with the Indianapolis Colts and appeared in two Super Bowls, noted that he entered Rutgers as an Educational Opportunity Fund (EOF) student and thanked Frager Foster, former director of the school’s EOF program, for taking him under his wing.

“Frager told me not to play football my first year, and I thought he was crazy considering that I had been playing for 14 years. But it turned out to be the best advice I received,” indicating that he was really able to concentrate on his studies that first year.

Gary was a walk-on member of the Rutgers football team, and by his senior year he was captain of the defensive team and won the team’s defensive MVP honors. He signed with the Colts right after graduation as a free agent and was released in 2012. But he continued his studies and is just weeks away from earning his MBA from George Washington University. He resides in Carmel, Ind., with his wife Ragan, who recently earned her medical doctor degree and is pursuing an MBA, and their daughter and son.

In 2007, Gary started the Gary Brackett Impact Foundation, which works with chronically ill and underprivileged children. At the award presentation, he repeated a quote attributed to Winston Churchill: “We make a living by what we get. But we make a life by what we give.”

Hank Ebert started his college career at the University of Idaho in 1973 and transferred to Rutgers in 1976 via the National Student Exchange program, receiving a B.A. in international environmental studies in 1979. He went on to get a master’s in public administration at Boise State University and now serves as the Idaho Department of Commerce’s business development liaison to north-central Idaho and portions of southwestern Idaho.

He has stayed remarkably connected to Rutgers by chairing the Rutgers Club of Southwestern Idaho and serving as a member of Rutgers Alumni Volunteer Information Network (RAVIN), dedicated to creating awareness for Rutgers among high school students and counselors and helping students interested in applying to Rutgers.

He told the audience that even though he was not a Jersey guy by birth, he was attracted to Rutgers because he had family members in Roselle Park, N.J., one of whom had been at Rutgers. “I also had a great-aunt who could sing ‘On the Banks’ even though she had never attended Rutgers,” he said. And he is very proud of the fact that there are 100 to 150 Rutgers alums in Idaho. 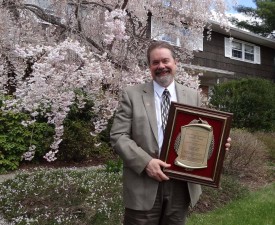 George Hamilton is chair of the Department of Entomology, director of the graduate program in entomology and Rutgers Cooperative Extension specialist in pest management. He has gained wide attention for his work on the Colorado potato beetle and the brown marmorated stink bug.

For the latter work, George enlisted the aid of colleagues across the university to collect live specimens they encountered overwintering in their homes and to deliver them to his laboratory in order to maintain a colony of the critters through the cold season. While they are little more than a nuisance for people, they do extensive damage to tree fruit and various food crops.

In thanking the alumni for his Dennis M. Fenton Award, George acknowledged that the award and his work “would not have been possible if I had not gotten my degree from here [in entomology in 1985] and then had the honor of being appointed to a position at the university.”

Described as a person with a “magnetic personality,” Bethany Rocque-Romaine, senior legal specialist in the Energy Division of the New Jersey Board of Public Utilities (BPU), has been active in student and alumni affairs since the time she arrived at the George H. Cook Campus. She received her undergraduate degree in political science in 1983 and her J.D. from the New England School of Law in 1986.

She recalled that “when I arrived on campus, I didn’t have a clue of what I wanted to do with my life… but I gained leadership skills and much more.” She recalled being fortunate to take a class called Environmental Design Analysis with the late Professor Roy DeBoer. He showed slides in class, she said, and “described the world around us” which opened her eyes to the many possibilities that life and education offered. Among the DeBoer-isms she took from the class were “bushes shouldn’t be shaped like meatballs,”  “trees shouldn’t be round,” and “parks shouldn’t be concrete with a locked gate.”

With a Ph.D. in horticulture science in 1992 and post-doctoral work at Harvard and Penn State, Wei-Hua Wu received an appointment in 1994 at China Agricultural University, where he is currently a professor. During his graduate school days at Rutgers, Wei-Hua studied plant responses to stresses, such as water, salt and heat. He is considered the premier scientist in these research areas in China and among the top scientists internationally.