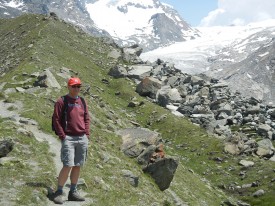 An avid outdoorsman, Tony hiked the trail in the Swiss Alps above Zermatt this past summer.

“Many of the important turning points in my life took place at Rutgers,” says Anthony J. Broccoli, an alumnus and professor of Environmental Sciences at Rutgers School of Environmental and Biological Sciences. “I came here as an undergraduate to study meteorology because of a fascination with the weather that began in my childhood. My professors showed me that there was more to meteorology than just forecasting the weather; they introduced me to scientific research.”

A dedication to research and teaching shaped Broccoli’s future. “I’ve followed a career path that was different from most university faculty. I came to Rutgers in the 1970s to study meteorology and left with my bachelor’s and master’s degrees. I was on the staff here as an instructor and lecturer for a couple of years before leaving to work at the National Oceanic and Atmospheric Administration (NOAA) in Princeton at its Geophysical Fluid Dynamics Laboratory, where I was a research scientist.”

“About 10 years after I began at NOAA, I decided to pursue my Ph.D. at Rutgers as a part-time student. I completed my degree in 1998 and continued working for NOAA until the opportunity to return to Rutgers came along in 2003. So the road has taken a few turns before leading me to where I am now.” 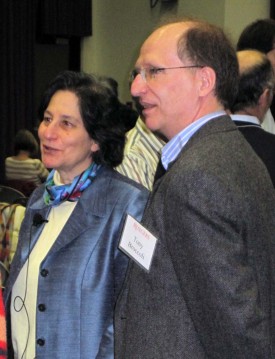 Tony with MIT Professor Susan Solomon. Tony hosted Susan when she visited SEBS in February 2011 to deliver the Executive Dean’s Distinguished Lecture on “Climate: A World of Change.” Susan and Tony were both members of the Intergovernmental Panel on Climate Change.

Along the way he has been a reviewer and contributor to four major reports issued by the Intergovernmental Panel on Climate Change (IPCC), the leading international body for assessment of climate change. In 2007, while Tony was a member of the IPCC, the Nobel Peace Prize was awarded jointly to the IPCC and former Vice President Al Gore.

Tony is well aware of climate change “skeptics” who point to such phenomena as a polar vortex and say, “what global warming?” His answer: “When people hear that the climate is warming, they have a tendency to expect each year to be a little warmer than the previous one. But that’s not how weather and climate work. To study changes in climate, we need to look at the big picture. We do that by focusing on long-term changes over at least a few decades, rather than the variations from month to month or year to year.”

Tony is now associate chair of the Department of Environmental Sciences, co-director of Rutgers Climate Institute and director of the Center for Environmental Prediction. He has been honored with several awards, including the George Hammell Cook Distinguished Alumni Award, the school’s Research Excellence Award, the American Meteorological Society’s Special Award and the NOAA Environmental Research Laboratories – Distinguished Authorship Award, just to name a few. He has also been named a Fellow of the American Association for the Advancement of Science and a Fellow of the American Meteorological Society.

In addition to being an outstanding faculty member, Tony is an avid outdoorsman – “doing anything that takes me outdoors,” such as running, hiking, gardening, golf, cross-country skiing and snowshoeing.

He also is a loyal alum who actively supports the Rutgers community through scholarships and as a Scarlet Knights sports fan. “From a personal standpoint, I have made many friends here and, most important, met my wife here,” he says. His wife Carol (Cook ’83, GSNB ’86) is the assistant director of the Rutgers Office of Continuing Professional Education. “I can’t imagine how different my life would be if I hadn’t come to Rutgers,” he concludes.

[Rachel Rodriguez, SEBS Class of 2017, assisted in the preparation of this alumni story.]