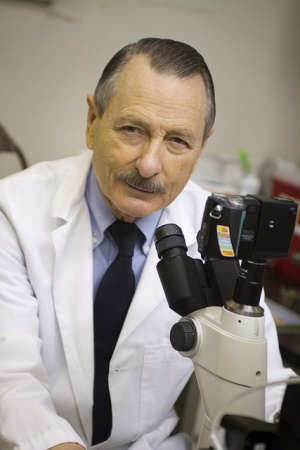 The principle of “one medicine” or, as it is sometimes called, “one health” deems that the relationship between human and animal medicine and public health and the environment is inseparable. Ralph Brinster, V.M.D., Ph.D., exemplifies the concept.

A 1953 graduate from the Department of Animal Sciences of what was known then as Rutgers’ College of Agriculture, he received his veterinary degree and his doctorate in physiology from the University of Pennsylvania. He is the Richard King Mellon Professor of Reproductive Physiology with the School of Veterinary Medicine and the Graduate School at Penn. Throughout his brilliant career at Penn, he says he still feels “strong ties to Rutgers.”

Three years ago, he was honored at the White House, under the auspices of the National Science Foundation, with the 2010 National Medal of Science, the highest honor the U.S. government bestows on scientists. It is one of many prestigious honors that Brinster has received over the years.

He readily acknowledges, though, Rutgers and his experiences at the College of Agriculture deserve a lot of the credit for his career and achievements. He especially remembers a young physiology professor, John Pino, and a more senior professor, Paul Sturkie, who “further turned me on to physiology and academics and helped steer me to graduate school.”

Brinster explained: “I came from a small farm in northern New Jersey, where we raised goats for milk. I applied to only one school [Rutgers] because we really had no money for me to go anywhere else. I paid for my first year with a small Sears and Roebuck scholarship and money I earned from a poultry business I started in high school. The next year I received a state scholarship, and that made things a lot easier.”

Professors Pino and Sturkie encouraged him to go to graduate school, but it was a moot point because the Korean War was in progress and this ROTC cadet was required to report to active duty in Korea. Overseas, he considered his options: go back to farming, become a veterinarian, or pursue physiology. He decided on the latter two: to become a veterinarian and continue on to receive a Ph.D. in physiology. “Having grown up on a farm, I had an interest in fertility, and that led to my work with germ cells,” he said. 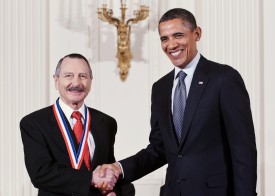 Ralph Brinster poses with President Obama after receiving the National Medal of Science in 2010.

This work has had a significant impact on human and animal medicine. His citation at the White House ceremony when he received the National Medal of Science noted “his fundamental contributions to the development and use of transgenic mice. His research has provided experimental foundations and inspiration for progress in germ line [the cells that give rise to sperm and eggs] genetic modification in a range of species, which has generated a revolution in biology, medicine, and agriculture.”

Transgenesis is not without controversy because of its deliberate modification of cells and organisms. But as Brinster pointed out in a lecture in 2001, “Germ line modification has existed for hundreds of millions of years and resulted in the evolution of species through interaction with their environment. Purposeful germ line modification by man began about 10,000 years ago in the fertile crescent of Southeast Asia with the domestication of plants and animals, giving rise to agriculture and shaping modern civilization.”

In the 1980s, his reproductive work resulted in the production of a “super mouse,” about twice the size of a normal rodent, that landed on the cover of Nature magazine and generated headlines all over the world. His research led more recently to spermatogonial stem cell research, with further implications for understanding human reproduction and disease prevention. This work, for example, is bringing hope to young men who, treated prepubescently for cancer and at significant risk for infertility, may be able to regain fertility. And it has applications for many other human, animal and agricultural diseases and conditions.

Ralph Brinster has been the subject of numerous articles and media profiles. He has been described as “reclusive,” “brilliant,” “revolutionary,” “a trailblazer,” “a relentless worker,” and “a good egg” (more on that one in a moment). He acknowledges his devotion to hard work, but he also has said on more than one occasion, that luck is important, too.

In a cover story in JAVMA News, author Malinda Larkin quotes him: “I approach things systematically. I set an objective and then determine what kind of resources I have. I develop a plan and work relentlessly. Those are the four steps to achieving anything, and you don’t want to get them out of order.”

Larkin goes on to write, “He adds that the fifth, and perhaps most important, factor is luck. ‘If you can choose between talent and luck, choose luck. I didn’t have a choice. I was lucky,’ Dr. Brinster said.”

Now, about the “good egg” description. In the fall of 2012, Rutgers Magazine profiled Ralph in a piece titled, “A Good Egg.” It introduced him as follows: “Ralph Brinster learned about the value of unrelenting work at an early age. The summer before entering high school, when he was 13, Brinster started an egg business on his parents’ goat farm in Cedar Grove, N.J. Brinster maintained a flock of 100 chickens, made deliveries to his customers (his mother drove), and kept the books on what became a highly fruitful business. …Brinster says he paid half his Rutgers bills from his egg profits.” 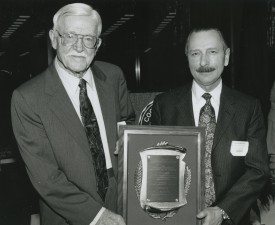 He has another “strong tie” to Rutgers, namely a friendship with President Robert Barchi, who in 1969 was one of the original selectees in the inaugural M.D./Ph.D. Medical Scientist Training Program initiated by the National Institutes of Health. “I also knew him when he was Provost at Penn. He was a great Provost and a rigorous scientist,” Brinster said.

His recent White House medal is just one of the many national and international honors he has received. He was awarded the prestigious Wolf Prize in Medicine from the president of Israel; Gairdner Foundation International Award from Canada; Distinguished Service Award from the U.S. Department of Agriculture; Charles-Leopold Mayer Prize from the French Academy of Sciences; and the first March of Dimes Prize in Developmental Biology, to name a few. He also received the George H. Cook Distinguished Alumni Award in 1999 and received an honorary degree from Rutgers in 2000.

In its 50-year history, Ralph Brinster is the first veterinarian and one of the few scientists with an agricultural background to win the National Medal of Science, joining the ranks of Nobel laureates Norman Borlaug and Barbara McClintock. One article about Brinster noted that while he declined to reveal his age, “his retirement is not in sight.” So, no doubt, more accolades are in store for this brilliant trailblazer.

Editor’s Note:
“One medicine” is said to have been identified by Rudolph Virchow, a German physician and pathologist from the 1800s who was determined to bring science to medicine and public health. Virchow is quoted as saying, “Between animal and human medicine there is no dividing line – nor should there be. The object is different but the experience obtained constitutes the basis of all medicine.” The late Dr. Calvin W. Schwabe (1927-2006), a veterinary epidemiologist and parasitologist at UC-Davis is credited with coining the term “one medicine.”