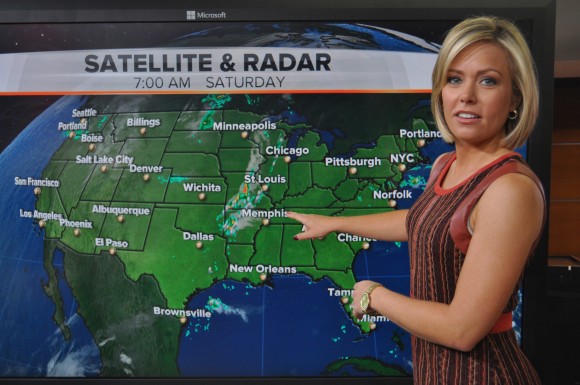 Dylan Dreyer (CC ’03), meteorologist, on the set of the Today Show.

She started out thinking she would be a research meteorologist and even spent some time as a student working with climate organizations, but for alumna Dylan Dreyer all it took was an internship with WCBS-TV New York weatherman Craig Allen and she knew being on television was her “dream job.”

Knowing where you want to go and getting there are two different matters, though. As Dylan, who is now the meteorologist on NBC’s Weekend Today Show explains, “The road to becoming a broadcast meteorologist is anything but easy. It takes sacrifice, commitment, perseverance, and a very thick skin. A good dose of luck didn’t hurt either.”

Dylan told the students that, growing up in Manalapan, N.J., she wasn’t sure what she wanted to study when she got to college. She liked math and science, “and meteorology sounded like fun,” so meteorology it was. She joined the Rutgers “WeatherWatcher” program, which at that time consisted of a pre-recorded broadcast from a small room with a PowerPoint and one camera. “I worked so hard to get this little pre-recorded weather show done,” she recalled with a laugh.

The experience helped after graduation when it was time to get a job. Needing a “reel” – an audition tape that she could send to stations in advance of asking for an interview – Dylan sought the help of a fellow alum who had a job at an upstate New York Fox television station. He arranged for her to use a studio and equipment to tape her demo. She recalled that it took her all day to get it right, but she had her tape, which she copied and “sent everywhere.”

She got her first break at a small station (a “market,” in broadcast lingo) in Pennsylvania. Eager to employ her science skills to forecast the weather, she was thwarted by the station manager who told her, “I don’t want to see any wavy lines or upside down triangles on the weather map. Just tell ‘em when it’s going to rain.” Nevertheless, she said, “It was an amazing experience. The station’s news director and staff were great. I was getting paid (the princely sum of $16,000 a year); I was on TV; and I was on my own.”

But being in the public spotlight every day on TV has its downside, too. Everybody is a critic. Dylan said she got calls from viewers – “your voice is too squeaky,” “you wear too many rings”, “your hair is too short,” “your hair is too long,” “wherever did you get that dress you were wearing today?” “This is where a thick skin comes in handy,” she said. But after a year, things began to click, and she was ready for “an upgrade.” 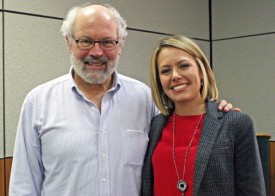 Dylan Dreyer with Alan Robock, professor in the Department of Environmental Sciences, who is in charge of the WeatherWatcher program. Photo by Tae Kim. Source: Rutgers Today.

Her next stop was Providence, a much larger market, where she tackled improvements in her television persona and performance, with voice lessons and other coaching. She hired an agent (“it killed me to give up 10% of my hard-earned salary”), but it paid off because her agent found her a spot in Boston, a Top 10 market, as the weekday morning meteorologist.

It was an especially fortuitous spot in several ways. First, it was the Boston NBC affiliate, WHDH-TV, a major player in the market. She became friends with the staff and best friends with the anchor. And, best of all, she met her husband-to-be, Brian, the in-studio technician (better known as “the cameraman”).

They planned to be married in October 2012. But just three months before, she got an opportunity at the Weekend Today Show. A shot at a network position, working with the likes of anchor Lester Holt and the national reporters she had watched on the network news, was the kind of opportunity every broadcaster dreams of earning, and it was hers to take.

Fall of 2012 was a whirlwind for this meteorologist. Dylan arrived in New York in September. She and Brian married in early October in Massachusetts. Then Superstorm Sandy hit at the end of October. Did the Jersey girl get the nod to lead the coverage of the storm of the century that targeted the New Jersey coast? Not exactly. Rather, she was on call at network headquarters 12 hours on, and 12 hours off for days on end, while the Jim Cantores of the business were the ones Down the Shore or at The Battery being the heroes buffeted by the storm. Still, it was an experience of a lifetime for a serious meteorologist.

Storms of all sizes are the most challenging for folks in her line of work, according to Dylan. “You have to do forecasting practically around the clock before the storm, then you have to talk non-stop during the storm, and you still can’t stop after the storm,” because everyone wants to see what happened and why.

A student in the audience queried, “Is all that work and effort worth it?” Dylan’s answer: “100 percent yes! It’s a pretty cool job; it doesn’t really seem like work. There is a new experience all the time – I’ve been on the air in Wisconsin on a water slide, at Ohio State with the marching band, hosted a dinner party at my apartment with Lester, Jenna and Erica (her Weekend Today colleagues), and every day pass famous people in the hallways. 30 Rock is pretty awesome,” she admitted. And by the way, she enjoys keeping up with friends and fans off the air, especially onTwitter – @DylanDreyerNBC.

If you were to ask Dylan what it was about her experience at Rutgers that led her to excel in her career, she would say that it gave her the opportunity to develop a strong work ethic – first, by pursuing a tough major and then by honing her skills as a WeatherWatcher through hard work and practice. She continues this habit even now. “My first day on the Today Show was September 14. There I was on national television, sitting next to Lester Holt, a broadcast icon. I was sweating, nervous, but it was just like all the other times – you just work on making the next show better than the current one.”

And for followers of the NBC Nightly News, Dylan did an outdoor stand-up report for anchor Brian Williams not too long ago – dressed for the 20-degree weather in a stylish parka and furry hood. Not too bad for a young professional with a generous heart, an enthusiastic attitude, and proof positive that “meteorology is fun.”