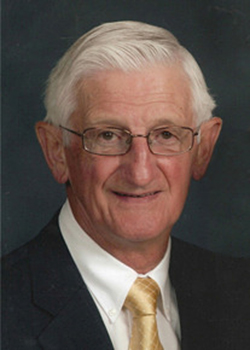 Rutgers alumnus and former faculty member Brevoort Conover, who passed away on April 13, 2014, was a 4-H Youth Development agent during his long career with Rutgers. He was recognized with several distinguished service awards and was inducted into the 4-H National Hall of Fame in 2010. In November 2013, he shared his story with the Office of Alumni and Community Engagement as part of the school’s celebration of the 150th anniversary of its designation as New Jersey’s land grant institution and the 100thanniversary of the Smith-Lever Act, which officially created the national Cooperative Extension System. Tell us your alumni story by contacting discovery@aesop.rutgers.edu.

Growing up on a small dairy and crops farm in rural Hunterdon County during the 1930s and ’40s, I did not see much of the world. Born in 1930 at the family home in Pittstown, our situation was typical of the times. The Great Depression was in full swing and my Dad was out of work. My parents lived in half of my grandfather’s farm house, relying on wood cut from the forest for heat and vegetables from a large garden, which they planted each spring. Milk from Grandpap’s cows each morning as well as eggs from his flock of Leghorn hens helped to keep us fed. By the way, my grandfather is the one for whom I was named.

Money was hard to come by. Dad worked summers on the farm, sold insurance evenings and weekends, and eventually was hired as a timekeeper for a local WPA project, which worked out of a YMCA camp just outside of Pittstown, called Camp McMann. Mom helped bring in a few bucks during the growing season by picking strawberries and packing tomatoes for area growers. When Dad landed a job at the new Franklin Township Consolidated School as a janitor in 1937, we thought we were on Easy Street. His annual salary was $800.

From the time I walked, I was always out in the barn helping feed the calves, carrying pails of milk, watering and feeding the chickens or pigs, gathering eggs, and lots of other jobs associated with the farm. I learned to drive the farm pickup when I was nine years old. Field work started as soon as I could drive the horses, around age eight or nine. 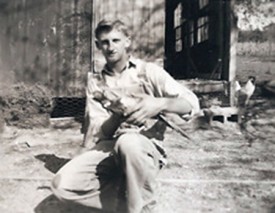 Breve was a nine-year 4-H member in Hunterdon County, NJ.

My introduction to Rutgers University came early when I started attending farm meetings with my grandfather. I went along primarily to keep him awake. Rutgers Cooperative Extension Service was a big part of New Jersey agriculture during this time, and they were involved in most of the educational meetings we attended. Names like Enos J.Perry and Wabun C. Krueger were familiar to me. In 1940, I joined my first 4-H Club, the Milford 4-H Dairy Club, which met in the Little York elementary school one night a month. Bernard F. Ramsburg was our 4-H Agent. Over the years, we became friends and he was my first role model. Becoming a 4-H Agent seemed like a pretty good job.

With the death of my grandfather in 1940, my Dad took over the farm as a partner with my grandmother, who remained owner of the farm. Dad added acreage to grow more crops, enlarged the dairy barn to increase the herd and built a large poultry house to increase the egg production. Farming during those years, with World War II, was tough. We had to deal with gas and rubber tire rationing as well as all of the other restrictions.

During my high school years (1944-48), I enrolled in a college course. I played sports, but I remained a very active 4-H member. I recall attending at least two Rutgers football pep rallies in the RAC and afternoon games in the stadium during the early ’40s with my parents and a huge crowd of 4-Her’s from all over New Jersey. The male cheer leaders impressed me. As an older 4-H member, I became a member of the Hunterdon County 4-H Council, a senior member group. Mr. Ramsburg was our advisor.

As a senior in high school, I applied to Rutgers’ College of Agriculture, took the college boards and was interviewed by Professor Helyar, who was dean and director at that time. I remember the day the letter of acceptance arrived. It was a warm spring Saturday morning (April, I believe) and I was gathering eggs in our upper chicken house. My mother, with letter in hand, came running up and handed it to me. She was so excited! Wow! I was going to college – the first in the family!

That fall, my parents made room arrangements for me to stay with my aunt and uncle who lived in South Bound Brook. Freshmen students were not allowed to have cars that first year. I hitch-hiked to classes the entire year as a commuter. With classes on both sides of town and a course load of 21 or more credits, it was a difficult year with a great deal of walking, to say the least. I survived – but barely – on probation. 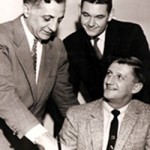 During the early part of my freshman year, I received a letter from the Burser’s Office. It asked me to stop by to pick up a check. I went to Old Queens second floor and asked them why I was receiving the check for my parents. They told me that I was receiving a scholarship (1864, I believe). The current recipient had returned home and Mr. Ramsburg recommended that I be awarded it due to my past 4-H involvement. My parents were elated to receive the money, $250, the amount of the first semester’s tuition. I received the scholarship all four years.

My second year was a bit better with a ’38 Ford and a room on Somerset Street. I tried out and made the JV football squad; however, I quit after our first game (and loss) against Army at West Point. Students on probation were not eligible to play RU sports. It was fun while it lasted. My grades improved, and I finally got off probation. I joined both the Collegiate 4-H Club and the Dairy Club which met evenings on campus.

My third year I roomed nearer the ag campus and my course load seemed lighter since I had more ag courses, which I enjoyed. I became more active on campus with the Collegiate 4-H Club, forming an intramural basketball team, and working on Ag Field Day displays. 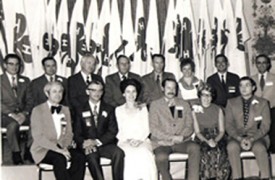 In 1951 during my junior year, my grandmother made the decision to sell the farm since it had become very difficult to make ends meet and make a decent living without further mechanization and buying more land. My dad agreed to the sale, and we moved off the farm.

During my senior year, I was elected president of the Collegiate 4-H Club and received a leadership medal from Dr. Helyar towards the end of the term. Rutgers awarded me a B.S. in Animal Science, Class of 1952, and provided me with a great education. However, now I had to find a job. I stopped into the state 4-H office to discuss Cooperative Extension positions with the 4-H Department chairman, Rollyn P. Winters. He liked my idea of becoming a County 4-H Agent, but they wanted candidates with experience, not new graduates. This put a different light on my hopes, and I made up my mind to get the experience, then apply.

To make a long story short, I worked three years as a dairy/crop farmer, renting a farm near Ringoes. Following two drought years and a marriage, I gave up the farm and took a management trainee job with Cooperative Grange League Federation Service and Exchange, which also lasted three years. I had received word from Mr. Winters in early 1959 that a County 4-H Agent position was opening up in Warren County, and they were looking for a candidate with my background. Was I interested? Yes indeed!

I interviewed, received my appointment, and started my Rutgers employment April 1959. New Jersey Cooperative Extension agents are faculty members with their own department. They also have the promotional and tenure system as all other RU faculty. I developed an aggressive educational youth development program, which attracted a large number of clientele and adult volunteer leaders. I worked in Warren County for 19 years, being cited by the county freeholder board twice for a Distinguished Service Award (DSA) and also received the DSA from the National Association of Extension 4-H Agents (NAE4-HA). As an active member of this latter organization, I served in numerous offices, including national president in 1974. 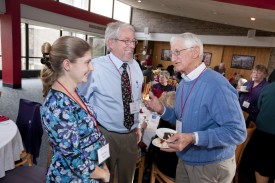 During my years of Rutgers employment, I was fortunate to have been put up for promotion as well as tenure, having the support of both my department and the administration. I worked on and completed the requirements for my master’s degree in adult education at the Rutgers Graduate School of Education, under the direction of Dr. Ernest McMann. It was awarded in 1967. In 1978, I was elected state 4-H Department chairman. I served two additional three-year terms, concluding my faculty appointment as 4-H Youth Development Specialist. During my 31 years, I was never turned down for promotion, and I retired as Professor I Emeritus in 1989. In 2010, NAE4-HA honored me with my induction into the National 4-H Hall of Fame at Chevy Chase, MD.

The impact of a Rutgers education is immeasurable in my life. Rutgers University was my life. The 4-H Youth Development Program impacted the lives of thousands of young people and I was so fortunate to have had the opportunity to serve at the county level involving both children and adults in so many vital educational experiences. The 4-H Youth Development Program continues today to enrich the lives of the members, developing them into well rounded, better educated citizens who can make a contribution to our world.