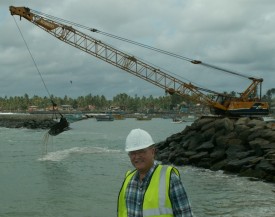 Michael Gould at a construction site in Sri Lanka: a fishing harbor being dredged to remove silt.

Not long after the Indian Ocean tsunami devastated the Sri Lanka coast the day after Christmas in 2004, Michael Gould, Ph.D. (GSNB 1976 – Environmental Science), a manager with the US Agency for International Development (USAID), began developing and then implementing a reconstruction project to help the Sri Lankan people restore their infrastructure, their lives and their livelihoods.

For the three years Mike worked on this project, he learned a great deal about undertaking a massive reconstruction as well as involving the community to ensure sustainability of the work. These are some of the hallmarks of USAID work around the globe, he told students when he visited the G.H. Cook Campus recently.

“This experience [in Sri Lanka] demonstrated to me the importance of working effectively with local organizations and communities. It was vital to invite and then sustain the participation of the Sri Lankan people.

“Participation at the community level must be carefully approached with consideration given to culture and gender. Participation of women is essential to develop community support. Participation ensured that our priorities were appropriately established and that we had the support needed to build the infrastructure,” which was accomplished using Sri Lankan firms.

So how does a fellow from tiny Spotswood, NJ, wind up managing major infrastructure developments in Africa, the Middle East and Asia?

Rutgers – and the Department of Environmental Sciences – get a lot of the credit.

Right after graduating with a degree in mechanical engineering from Clarkson University in New York State, Mike took a job designing water treatment equipment for a manufacturing company in Union, NJ. This was an excellent first job for a new grad, and Mike appreciated the opportunity. But he soon realized he was much more interested in the science than the equipment and decided to take an environmental science night course at Rutgers.

This happened at a time when interdisciplinary studies were gaining prominence, and the importance of environmental education attracted national attention. (Recall that in 1970 President Richard Nixon signed the National Environmental Policy Act that laid the foundation for the establishment of the U.S. Environmental Protection Agency.) The times were right for a person who was passionate about environmental engineering and water pollution to connect with an academic program, such as that of the Department of Environmental Sciences, which already had adopted an interdisciplinary approach to solving environmental problems.

Mike Gould (and, by the way, his classmate, now Environmental Sciences Professor Peter Strom) enrolled in a graduate program guided by a faculty that included Professor Emeritus Joseph Hunter, and the late Melvin Finstein, Samuel Faust, Raymond Manganelli, and Emil Genetelli, Gould’s graduate adviser. And as for interdisciplinary approaches, their fields ranged from pollution microbiology to wastewater treatment processes to air pollution.

Besides being his adviser, Emil Genetelli was well connected in government and industry and served as a consultant on major projects. This connection introduced Mike Gould to the USAID and a project in West Africa that needed a team leader in water quality. So with his wife and six-month-old daughter, he left for Senegal and eventually joined USAID full time in 1980. He recently retired from the agency after 27 years as a foreign service officer.

It turned out that his new life’s path took him from being a scientist/technician to being more of a generalist and, in his words, “a better engineer as an accomplished project manager. The interdisciplinary education I received at Rutgers gave me the background and ability to think and see the big picture and to approach problems generally.

“Even if you want to stay in science,” he continues, “what you learn today may not be specifically relevant in the future. The most important lesson is to look at other disciplines to help you address problems.”

Mike came to campus recently at the invitation of Peter Strom to talk about opportunities in international development related to the environment. He told students that while many of the traditional activities supported by USAID, such as programs encouraging biodiversity and discouraging deforestation, continue to be a priority, global climate change has become an emerging concern and theme.

Since global climate change will affect all areas of life – from infrastructure to food to economics to politics – current students would be well advised to broaden their academic focus. “In the 1970s, a student was required to take a broad array of courses. If it isn’t that way now, do it yourself. And by all means, pursue what interests you. What you research is less important than the overall objective – a broad science-based education,” he advises.