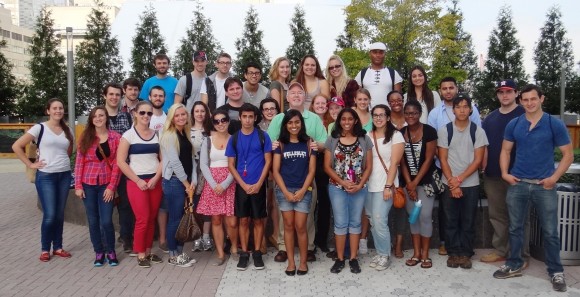 As part of the undergraduate Agroecology course in the Agriculture and Food Systems program at SEBS, Mark Robson, dean of Agricultural and Urban Programs, escorted his class to New York City to see – of all things – local agriculture. While the Big Apple is usually a destination for cultural pursuits, the burgeoning buy local and urban farm movement also thrive in NYC. The students’ first stop was Riverpark Farm, at 1st Avenue and 29th Street, which supplies the famous Riverpark Restaurant. The farm is the largest on-site farm to service a city restaurant in the U.S. Resident farmer Zach Pickens met with Robson and his class to talk about growing methods, cultivar selection, timing and pest control. 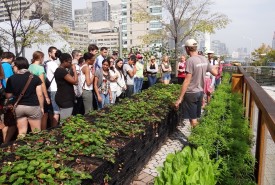 After the visit to Riverpark Farm, the class walked to the Union Square Green Market, the flagship market for the New York City’s Greenmarket initiative. The market began with just a few farmers in 1976 and has grown to now include 140 regional farmers, fishermen and bakers during the peak season. The students met with the market manager David Sherman and then visited four vendors at the market to learn about their farm operations. The students were then charged with interviewing at least two other farmers about their operation, why they travel to the NYC market and the challenges of modern day ag production.