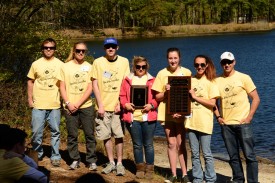 For the fourth year in a row, a team of high school students from the Marine Academy of Technology and Environmental Sciences (MATES) in Manahawkin, NJ, was the winner of the New Jersey Envirothon, held on May 4 at Girl Scout Camp Kettle Run in Medford, NJ. Rutgers Cooperative Extension (RCE) is among the sponsors of the environmental competition.

The Ocean County students competed against 33 other teams on knowledge of natural resources-related topics, including soils, forestry, aquatics, wildlife ecology and a current environmental issue. This year’s theme was “Sustainable Rangeland Management: Achieving a Balance Between Traditional Agricultural Uses with Non-Agricultural Uses on Montana Rangelands.”

“For 20 years, New Jersey high school students have had the opportunity to participate in this valuable competition and learn more about the environment, natural resources and science,” said Secretary of Agriculture Douglas Fisher. “We hope they take advantage of the skills they learned and consider careers in agriculture and natural resources-related fields.”

Two 5-member teams of MATES students competed in last year’s Envirothon with all but one of those students graduating. The two MATES teams placed first and second in 2012. An almost entirely new set of 10 students made up this year’s two teams.

“I am very proud of the hard work and dedication put forth by our members,” said MATES advisor Adam Sprague. “It was quite an accomplishment considering it was the first year competing for nine out of the 10 team members. We now turn our attention to Montana which offers an exciting variety of challenges in terms of preparation for our students.”

The 15 Soil Conservation Districts in New Jersey follow county boundaries and implement the New Jersey Soil and Sediment Control Act, which governs certain aspects of new development. These semi-autonomous bodies are locally governed and play a strong role in the protection of New Jersey’s natural resources.