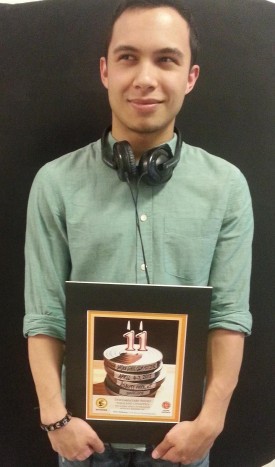 Thailand Untapped: The Global Reach of Engineers Without Borders, a documentary featuring the experiences of three Rutgers engineering students who traveled to Thailand in 2010 with the hope of fixing a rural village’s failing water system, has won the 2013 Home Grown Documentary Short award from the Garden State Film Festival.

The 37-minute film features Rutgers students Liz Silagi, Jon Tarczewski and Carly Rogers, working under the auspices of the volunteer organization Engineers Without Borders, as they travel to a province in northern Thailand to bring clean, potable water to the village of Nong Bua. The film highlights the challenges and obstacles the students faced during their journey.

Directed by Dena Seidel, director of the Rutgers Center for Digital Filmaking and produced by a team of student filmmakers from Rutgers Writers House who accompanied the engineering students to Thailand, the film depicts the race against the clock to implement a water filtration system during a period of prolonged political unrest in Thailand.

The student documentary team included Chantal Eyong who served as producer, editor and cinematographer; Steve Holloway as associate producer, cinematographer and co-editor; and Mark Mancini who created the original music and animation.

The film was also a New Jersey Film Festival selection and was screened at the La Femme International Film Festival in Hollywood in 2012. Thailand Untapped premiered on television on NJTV as part of the new NJDocs series and can be viewed on its website.

The Engineers Without Borders chapter at Rutgers was established in 2005. In addition to initiatives in Thailand, the chapter has participated in projects in Kenya and Guatemala. Locally, the chapter has helped implement a local community service project in Camden in collaboration with Rutgers Cooperative Extension and Camden Agricultural Coalition.

Faculty members Donna Fennell and Chris Obropta from the Department of Environmental Sciences as well as a number of Bioresource Engineering students affiliated with the School of Environmental and Biological Sciences have been involved in the local chapter of Engineers Without Borders.