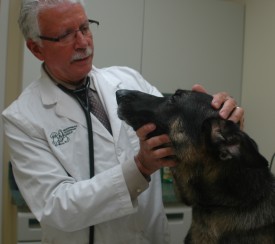 Barry Adler examines one of his patients.

Conventional wisdom tells us that in order to be successful in a career, one has to be passionate. Barry Adler, DVM, (Animal Sciences, ’72) would likely add: “One also has to be compassionate.”

Barry is founder and director of the Woodbridge Veterinary Group and Hospital in Woodbridge, NJ. He has stayed close to the School of Environmental and Biological Sciences and to Rutgers over the years. He and his wife Deborah were featured in the most recent SEBS Profiles publication where it was noted that they “believe in the value of a Rutgers education. Like many alumni and spouses, the Adlers have generously supported Rutgers, from encouraging talented students across New Jersey to attend, volunteering at alumni activities, and being advocates for a stronger Rutgers.”

They support student scholarships, especially those that provide international study opportunities for undergraduates. And Barry recently volunteered to be the alumni chairman of the First Annual “Let’s Do Lunch with the Executive Dean” barbecue at the 2013 Ag Field Day at Rutgers Day. More than 200 alumni and guests signed up to chat with Barry and Executive Dean Bob Goodman and to network with classmates, faculty, students and friends. 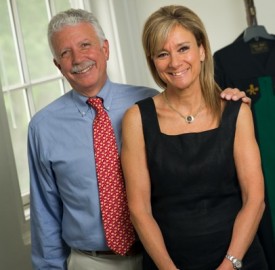 The compassionate part – in addition to Barry’s philanthropic works – is demonstrated almost daily in his veterinary work. The way he describes it is “there are two ends to every leash. Being a veterinarian channels your science brain and combines with your curiosity about animals and your relationship with people.

“Understanding that there is a rapport between the client (the owner) and the patient (the pet) helps you understand the empathy between the two. You may not agree with every person, but you must be tolerant of how they view that relationship with their animal.”

To a large extent, he credits his mentors at what was then called the College of Agriculture and Environmental Sciences. It was Professor John O. Grun who counseled Barry to “be a vet first” and that influenced Barry’s philosophy: “Think about doing excellent medicine and surgery, and the rest will follow.” That means Barry has treated a pet in distress even if there is no guarantee that the client will be able to pay or to pay in full. It also means that he stays very connected to people and devotes a large part of his time to volunteer work.

Involvement started during his undergraduate years. At that time, only a handful of seniors were admitted to veterinary school because they were from New Jersey (no, it had nothing to do with “Jersey attitude;” rather, it had to do with the fact that New Jersey did not and does not have a veterinary school, putting our students in competition with in-state students in other jurisdictions). Barry joined the pre-vet club on campus, became president in his junior year and worked with a group of advocates and the New Jersey Legislature to establish a system of “contract seats” for Garden State students wishing to attend vet schools outside the state. That system remained in place until very recently.

Barry was accepted into the veterinary school at The Ohio State University as one of the first contract students from New Jersey. He got off to a great start when his advisor, Dr. Gomes, commented upon his arrival, “You went to Rutgers, so I assume you must have an excellent background in science.” True to his impression, Gomes let Barry move right away into the highest level master’s courses, bypassing the lower level courses. Barry visits the OSU campus every year and talks fondly of his experiences there.

In fact, the assistance Barry received from advisors and mentors both at Rutgers and Ohio State has reinforced in him the value of mentorship – a value that he and Debi wish to pass on to their son Sam and daughter Alexandra. That, and loyalty, tenacity and “staying true to your word.” And, we might add, true to your school.