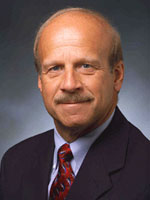 When the call went out in the December 2012 Discovery Initiative newsletter for stories from alumni, Robert Gravani answered.

A Professor of Food Science and Director of the National Good Agricultural Practices program at Cornell University, Bob received his bachelor of science degree in Food Science in 1967 from Rutgers’ College of Agriculture and Environmental Science, preparing him for his master’s and doctorate degrees from Cornell. His CV lists honors and offices with the prestigious Institute of Food Technologists, the National Academy of Sciences, and the International Association for Food Protection, among others.

He is a husband, father, jogger, bicycler, kayaker, sailor, skier, and ice-skater, but when he got in touch with us at the School of Environmental and Biological Sciences, he wanted to talk not about himself, but rather how two important faculty members during his undergraduate years influenced his career and success. They were the late Richard (Dick) Merritt, at the time associate dean and director of resident instruction, and the late Elizabeth (Libby) Stier, professor in the Department of Food Science. 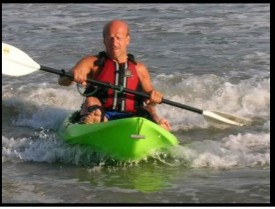 Taking time off to kayak.

In the 1960s, the current School of Environmental and Biological Sciences morphed from the College of Agriculture to the College of Agriculture and Environmental Science with some 400-500 students, including about 100 graduate students. (By comparison, today SEBS is approaching 4,000 enrollees.) There was a one-on-one atmosphere on campus. Bob worked in Dick Merritt’s office for part of the summer after his freshman year, he listened to faculty from nearly every major via a weekly seminar series, and in his senior year had the pleasure of introducing Nobel prize winner Dr. Selman Waksman, at that time a professor emeritus, who was a speaker at one of the seminars.

A Hudson County/Union City, NJ, native, Bob visited Rutgers as a member of the Boys State contingent and “really enjoyed the campus and the facilities.” He recalls that a wise high school guidance counselor “told me about the College of Agriculture and Environmental Science, and I applied. It was a great choice! Even though I applied to and was accepted at several other schools, Rutgers was always my first choice”

Back when Bob matriculated, the G.H. Cook campus was an entirely different place. One of the big differences was that students didn’t live on the Cook campus. Instead, they lived primarily on the College Avenue campus. In the Fall of 1963 the dorms were full and many accepted students were housed on the Douglass College campus.  Bob wound up living in the Corwin House D – one of the “Corwin boys” as he puts it. And not a bad deal, in view of the fact that most of his neighbors were the women students from Douglass, and all the Rutgers students were male.

Here is how Bob describes the influence of Dean Merritt and Dr. Stier: “At the end of my freshman year when I was to select a major field of study and met with [Dick Merritt], [he] listened to my interests and suggested that I speak to the faculty in the Department of Food Science. Dick Merritt shared a comment that I vividly remember when we were talking about Food Science as a career. He said, ‘Remember, as long as people have to eat, you’ll always have a job.’ I never forgot that statement.”

Next stop for Bob was an interview with Dr. Elizabeth F. Stier, undergraduate coordinator in the Department of Food Science. “After visiting with Dr. Stier, I was convinced that Food Science was the major for me…. I clearly remember the support, encouragement and excellent mentoring that I received from both Professors Merritt and Stier during my undergraduate program. Over the years, I know that they have also assisted and positively influenced many other students in their career choices.

“Following their excellent example, I work closely with our Cornell Food Science undergraduate students to assist them in all aspects of their adjustment to college life, course selection, career development, and try to provide the same interest, kindness and support and mentoring that Dick Merritt and Libby Stier shared with me.”

Dr. Stier coordinated the undergraduate program in Food Science from 1952 to 1978, the only female professor in the department at that time. She was considered a pioneer and a tough-talker – able to hold her own in a very male academic environment. An undergraduate scholarship still is awarded in her honor, and the Institute of Food Technologists (IFT), the professional society of food scientists, has an award in her name “to honor a member for the pursuit of humanitarian ideas and unselfish dedication that has resulted in significant contributions to the well-being of the food industry, academia, students or the general public.”

Dr. Merritt celebrated his 50th year as a member of the faculty at Rutgers in 2006 and was still actively involved in the Department of Plant Biology and Pathology until his death in 2011. He was instrumental in the evolution of the College of Agriculture and Environmental Science into Cook College, and as Dean of Instruction with Cook had responsibility for academic and student life at the growing college. A memorial scholarship is being developed in his name.