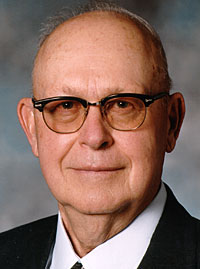 It is with deep sadness that we announce the passing of Dr. C. Reed Funk. Reed passed away the morning of Thursday, October 4 after a brief battle with pneumonia. He was 84 years old.

Funk joined the faculty at the New Jersey Agricultural Experiment Station in 1961 and was a pioneer in the field of turfgrass breeding. Throughout his illustrious career that spanned over four decades, he is credited with the development of hundreds of cool-season turfgrass cultivars with dramatic improvements in pest and stress tolerance. Many of his germplasm releases, such as ‘Manhattan’ perennial ryegrass and ‘Rebel’ tall fescue, are considered landmark cultivars and have served as a foundation for many of the new turf-type cultivars used throughout the world today. His tremendous intellect and keen sense of observation led to many significant discoveries including the development of the first successful method of breeding Kentucky bluegrass by means of intraspecific hybridization, and the discovery that endophytic fungi can impart increased tolerance to major insect pests and enhanced performance for turfgrasses growing under environmental stress. Reed’s diverse germplasm collection and enhancement programs have revolutionized the turfgrass sod and seed industries throughout the world.

In 1996, Funk embarked on an ambitious perennial tree crops breeding project at Rutgers, setting his sights on using plant breeding to develop highly nutritious and sustainable tree crops able to be grown on marginal land. Later, he expanded this project to Utah and developed a non-profit foundation dedicated to breeding tree crops adapted to the Intermountain West region of the United States. Both of these projects are prospering today because of Reed’s vision, unmatched work ethic, and commitment to excellence. Reed was a mentor to dozens of students, faculty and staff and a friend to everyone in the Rutgers and Turfgrass Community. He will be sorely missed.

There will be a viewing Tuesday, October 9, from 6:00 – 8:00 pm at Allen-Hall Mortuary (34 E. Center Street) in Logan, Utah and Wednesday morning, October 10 from 9:30-10:30 am at the LDS chapel (corner of 150 South and 100 East street) in Richmond, Utah prior to the funeral service. The funeral will be held on Wednesday at 11:00 am at the LDS chapel. Condolences may be sent to the family at the funeral home website. In lieu of flowers, the family requests that donations be made to Improving Perennial Plants for Food and Bioenergy, Inc. (IPPFBE), Funk’s non-profit group, on the IPPFBE website.