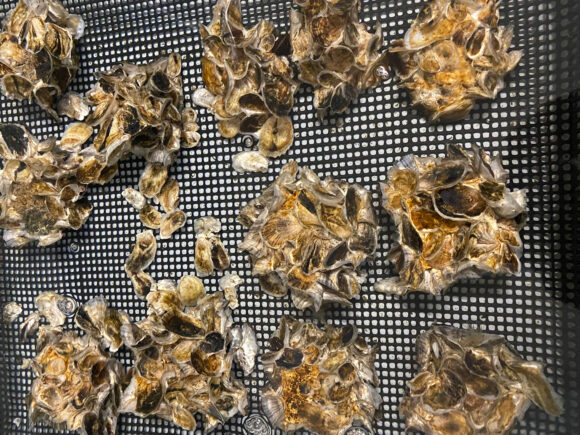 Oysters in an cement setting experiment from Richard Riman’s laboratory.

Rutgers has been awarded $12.6 million by the Defense Advanced Research Projects Agency (DARPA) to develop an oyster-based shoreline ecosystem to help protect coastlines from storm damage, flooding and erosion.

The Rutgers-led project, “Reefense: A Mosaic Oyster Habitat (MOH) for Coastal Defense,” will focus on oyster reefs in the Gulf Coast and combine novel cements and concretes with state-of-the-art shellfish breeding and the latest ecological engineering of shoreline habitats.

Leading the project is David Bushek, director of Rutgers’ Haskin Shellfish Research Laboratory (HSRL) and a professor in the Department of Marine and Coastal Sciences (DMCS). Richard Riman, Distinguished Professor at the Rutgers School of Engineering (SOE), is the project’s co-investigator and is leading the development of the novel engineered reef. Collaborating Rutgers researchers include Distinguished Professor Ximing Guo and associate professor Daphne Munroe, both of HSRL DMCS and Hani Nassif, a professor in the School of Engineering.

Natural shorelines move over time and accelerated rates of erosion from sea level rise and increasing storm events puts fixed infrastructure such as roads, buildings and airfields at risk. Conventional hardened shorelines remain fixed in one place but at the cost of supporting a vibrant ecologically important plant and animal community. This designed rigidity can exacerbate storm surge damage and ultimately will fail as sea level rises.

The impetus for the project was to develop an ecologically functional engineered structure that mimics a fringing oyster-reef complex providing the strength and longevity of hard structures while facilitating the benefits provided by organisms colonizing the structure.

“We set out to understand where certain strategies worked and where they failed and learned that most habitats fail on their own,” said Bushek. “They must work in concert with the adjacent habitats to persist.  In doing so, the benefits expand synergistically to produce something that is much more robust and resilient over time, providing both ecological and structural benefits.”

The ecologically engineered reef will utilize a combination of biodegradable concrete to support reef building oysters up to their exposure tolerance in the intertidal zone, while a low-carbon-footprint material with excellent materials properties from Riman’s laboratory will provide adaptive space on a firm foundation. The oysters will be able migrate upwards as sea level rises and ensure enduring space for recolonization if living portions are damaged.

Bushek said biodegradable materials in oyster restoration are emerging (e.g., potato starch mesh bags), yet none have proven to deliver the durability or level of wave attenuation necessary to sustain oyster colonization. Research partners at the University of Melbourne have developed the first biodegradable concrete with mechanical stability and durability over a life span that enables oyster-reef development. The biodegradable technology will be combined with Riman’s low-carbon cement to produce a productive and resilient base structure for oyster colonization, persistence and resilience.

Lower portions of the overall structure will support sea grass habitat, while the uppermost portions will be colonized by ribbed mussels and saltmarsh grasses interspersed with sand and mud to form a mosaic of habitats, increasing the overall ecological function and structural resiliency.

Should sea levels rise beyond expectations, the modular design will enable additional expansion of the structure, Riman said.

Bushek credits Rutgers’ more than 60-year-old oyster breeding program as the other ace in the hole for the winning proposal.

“Ximing Guo, who led the sequencing of the oyster genome, runs our breeding program and heads the East Coast Shellfish Breeding Consortium, brings the ability to implement genomic selection enabling us to utilize local oyster resources without the need for genetic engineering or manipulation so that we can produce faster growing, disease resistant oysters in the time span of the five-year project,” said Bushek.

Through Reefense, DARPA has partnered with three research teams charged with developing comprehensive, enduring solutions in the northern Gulf of Mexico, the Pacific and the Caribbean/Atlantic regions.