Alumna Jessica Ware, a curator at the American Museum of Natural History, helps prepare exhibits that educate the public about insects. 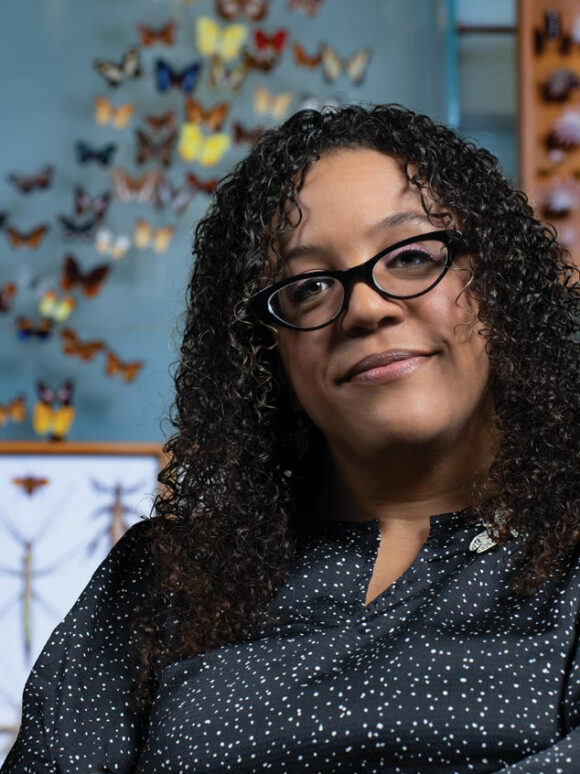 As an associate curator of invertebrate zoology, alumna Jessica Ware studies insect evolution, genetics, and anatomy while helping to prepare exhibits that educate the public about insects. Photography by AMNH/D. Finnin.

At any given time, about 10 quintillion individual insects fly, hop, or crawl their way across the earth. They’re so abundant, in fact, that they make up about 90 percent of all animal life. With numbers like that, do we really need to be concerned when their populations wane?

Absolutely, says alumna Jessica Ware, an associate curator of invertebrate zoology at the American Museum of Natural History in New York City. In addition to helping prepare exhibits that educate the public about insects, Ware GSNB’08 studies insect evolution, genetics, and anatomy. She’s using that information to study the health of insect species and determine which are declining. She has shared her insect insights on such shows as PBS’s Nova and Neil deGrasse Tyson’s StarTalk podcast.

Insects, Ware says—and not just butterflies and bees—are major pollinators of many food crops. They are also destroyers, but in a good way: termites and other insects break down dead wood and vegetation, allowing new growth to occur. What’s more, insects are a primary food source for birds and mammals. “A significant number of bird species would go extinct without insects,” says Ware, who was an assistant professor of biology at Rutgers University–Newark before moving on to the museum. “That would affect the animals that eat the birds. It would be catastrophic.”

Insects also hold tremendous promise as a sustainable food source for humans, requiring fewer resources to produce than do other sources of protein. Eating insects, or entomophagy, Ware says, “is the wave of the future.”

While Ware is fond of all insects, there is one she would prefer not to encounter. The mother of two teenagers, she says she used to panic each time a note from school came home warning of head lice cases. “They never got them, thank goodness,” Ware says of her kids. “Lice have an evolutionary trajectory that helps us understand human migration, which is cool. But as a mom, I would not want them in the house!”

The American Museum of Natural History will be opening the Richard Gilder Center for Science, Education, and Innovation, which will include a butterfly vivarium and an insectarium that alumna Jessica Ware helped develop.

This article by Amy Vames originally appeared in Rutgers Today.