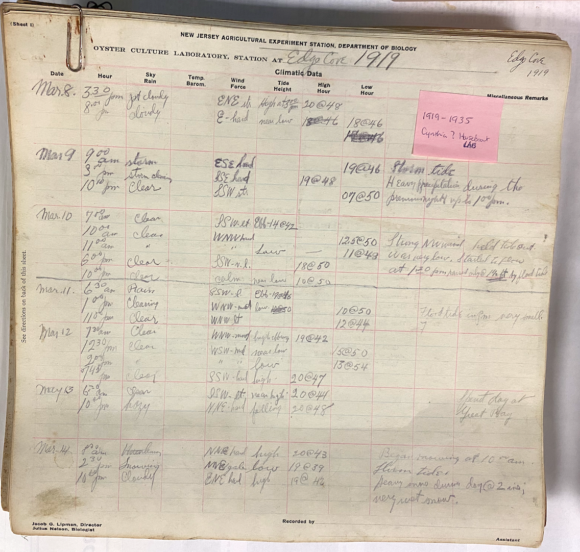 After longtime Rutgers Haskin Shellfish Research Laboratory (HSRL) associate Walt Canzonier passed away in June 2021, a box containing historic data was returned to the lab. Canzonier had designed and overseen much of the construction of the current lab in Bivalve, NJ, according to professor David Bushek, Department of Marine and Coastal Sciences and director of HSRL. 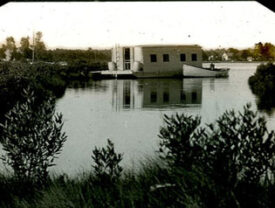 The houseboat Cynthia on Barnegat Bay, NJ circa 1915.

The box contained old weather and tide information collected from the R/V Cynthia, a research lab built on a houseboat that got towed and anchored to different locations. (For those Rutgers shellfish research historians, note the year at the top and the names printed in the bottom left corner.)

Did you know that research in shellfisheries at Rutgers began in 1888 when Julius Nelson was hired as the biologist for the newly formed New Jersey Agricultural Experiment Station? A poster about the Nelsons in 2008 as part of the 100th anniversary of the National Shellfisheries Association details the history.

The lab does not collect data in that way anymore. Today it is generally collected with sensors from Sandy Hook that are available in near real-time on the web.

R/V Cynthia sat outside the Ag Museum for years, sadly deteriorating beyond the point of restoration.  Thankfully an engineering design drawing as well as several photos of the boat with people working on it hangs in the Haskin Shellfish Research Laboratory library.

This historic data will be preserved by New Jersey State Climatologist David Robinson. Read more about the history of the Haskin Shellfish Research Laboratory.