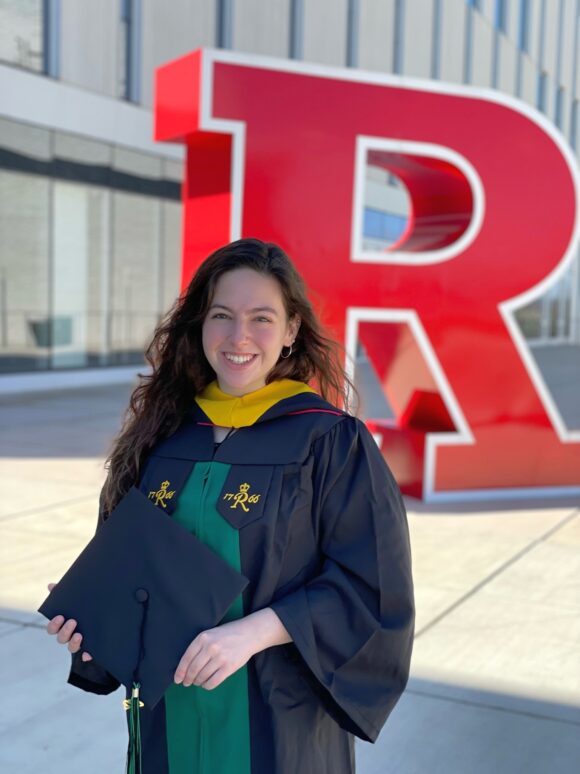 When Julia Buttgereit first discovered that she could combine her interests in baking and chemistry and turn it into a career in the field of food science, she was instantly intrigued. Food science would allow Julia to use her creativity in a scientific setting, and she would be able to help create new foods for people to enjoy. She did some research about universities that offer food science as a major and discovered that the Rutgers School of Environmental and Biological Sciences (SEBS) had all of the elements that she was looking for in a school.

One of Buttgereit’s goals at Rutgers was to take advantage of as many opportunities as possible over the course of her four years. She became an active member of Rutgers Undergraduate Food Science Club during her first semester on campus. Food Science Club holds biweekly meetings for members of all majors as well as networking events, student competitions and field trips.

During her sophomore year, Buttgereit was elected social media manager for Food Science Club, helping to plan and organize the events that she loved being a part of, using her creativity to develop engaging promotional materials. Being a member of the executive board that year proved to be extremely rewarding, so Buttgereit decided to take the leap and run for president and was elected her junior year, and then again in her senior year. Serving as president of Food Science Club has been one of Buttgereit’s most impactful experiences at Rutgers.

The food science major is especially fascinating for Buttgereit because food is a universal necessity that is teeming with scientific phenomena that many people take for granted. While many might think that food science is just about creating new, delicious food products for people to enjoy, Buttgereit learned that utilizing food technology can have a huge impact on our global food systems and can help combat food insecurity and food waste.

Buttgereit explored this topic more by taking graduate courses in the Master of Business and Science Program at Rutgers and had the opportunity to share her passion for food science with first-year students by teaching her very own one-credit First-Year Interest Group Seminar (FIGS) called “Exploring Food Science.” Through discussions, group activities, and hands-on experiments—including making ice cream—her students were able to explore careers in food science, the science behind some of their favorite foods and resources at Rutgers they could utilize to make the most of their time here.

After being inspired by mentors including alumni, industry professionals and faculty, Buttgereit was motivated to give back to the food science community at Rutgers and hopes to have an impact on others like her mentors had on her.

Within the Department of Food Science, Buttgereit has been the recipient of the Dr. Bruce P. Wasserman Prize, the Virginia Dare Company Award, and the Elizabeth F. Stier Scholarship, all of which recognize her academic achievements and dedication to the department through extracurricular activities. In addition to the degree in food science, Buttgereit is also pursuing a second major in nutritional sciences, completing the Nutrition, Food, and Business option at SEBS.

The lack of female representation in STEM fields growing up has motivated Buttgereit to try to fill that gap with her passion and enthusiasm for food science. During the pandemic, when classes were 100% remote, she found joy in leading talks and workshops about the field of food science for high school classes with her peers and even had the opportunity to lead a virtual demonstration about how to make homemade ice cream, where students had their own ingredients and were able to make ice cream along with her on Zoom.

Buttgereit is a member of the Honors College, women’s club soccer team, and Green Print. She is the co-founder and president of the Rutgers Roller Skating Club, which she established with her sister last fall. She is also a resident assistant on College Avenue. As an RA, Buttgereit discovered the impact that an inclusive community has on students. This inspired her to create a new Food Science Mentoring Program with Food Science Club, in which new food science students are paired with upperclassmen in order to facilitate community-building within the department.

“Julia Buttgereit is an outstanding student. She took advantage of many opportunities throughout her time at Rutgers and accomplished a lot in a short period of time,” says Chitra Ponnusamy, assistant teaching professor in the Department of Food Science. “She has enriched the SEBS community at large through her service and has proven herself a capable leader.”

Buttgereit joined the SEBS Ambassador team during her first year on campus to get more involved in the SEBS community. Being on this team has been a very meaningful experience. Julia loves sharing her excitement for Rutgers and SEBS with prospective students on tours of the beautiful Cook campus.

One of Buttgereit’s favorite things about SEBS is that it is a close-knit community within Rutgers. She loves being able to enjoy the experience of a small-school atmosphere while having the benefits of all the opportunities that a big state school can provide. Upon graduating in May, Buttgereit will be working with her favorite confectionary products full-time in research and development at Mars Wrigley.