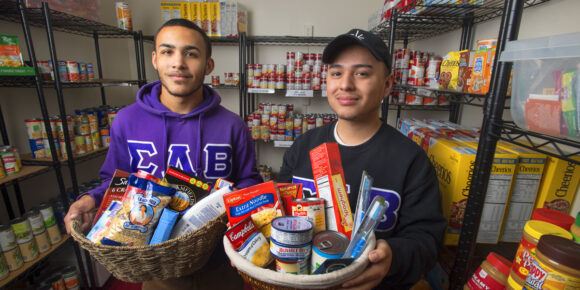 Though fewer Rutgers students reported being food insecure in 2019 than in 2016, the data does not necessarily indicate that the rate has decreased significantly, Cuite says. “This is because we used different recruiting strategies and slightly different measurement tools as a result of changes in best practices in studying this issue,” she explains. “However, there is evidence that food insecurity is being better addressed at Rutgers–New Brunswick from an institutional perspective.”

Committed to addressing this important issue, Rutgers–New Brunswick created the Rutgers Student Food Pantry in 2016 and began to systematically study the prevalence, causes, and consequences of food insecurity among its students. This was expanded to include housing insecurity and homelessness in 2019. Taken together, the surveys indicate that existing programs are being utilized, and that students would benefit from increased programming and support services.

The survey data and information being gathered from the Rutgers Student Food Pantry show that the rate of use has increased significantly since it opened, likely because of increased outreach over the past few years, including introducing the pantry during New Student Orientation.

In addition to increasing awareness of the pantry, Rutgers–New Brunswick has created several new programs, some of which are based on best practices at other colleges and universities, like meal swipe donations and SNAP enrollment assistance. Others were developed at Rutgers–New Brunswick, including a food insecurity “screen and intervene” program conducted through Rutgers Student Health.

A new paper published in Journal of Extension describes other innovative partnerships between the food pantry and the Rutgers Student Farm at Rutgers Gardens, which grows food specifically for food insecure students, and the New Brunswick Community Farmers Market. These programs provide free fresh produce to food insecure students.

Even during the pandemic, the Rutgers Student Food Pantry has continued to serve students remaining on campus as well as off-campus students that live close enough to use it. 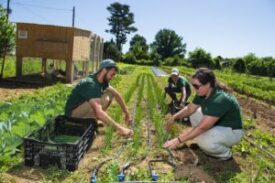 In 2019, the Rutgers Student Farm began donating one-third of its harvest to the pantry, (approximately $12,000 worth of fresh produce weekly June through November). The farm is expected to expand over the next three years and transition to a 50 percent donation model, providing produce for 200 to 300 students every week.

The New Brunswick Community Farmers Market operates in three locations four days per week. Program use has grown by nearly 270 percent since the partnership with the pantry began. The market plans to expand voucher distribution to additional students and increase disbursements to further increase access. 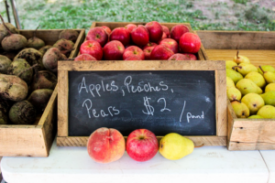 The main successes and challenges of the market voucher and farm donation programs are similar.

Both programs have increased access to fresh fruits and vegetables. Vouchers for market produce are redeemable on multiple days each week and data shows that students are more likely to go to the pantry on days that farm produce is available. Because each program allows students to choose produce that appeals to them, food waste is reduced and student diets are improved.

The pantry purchased a vehicle to transport produce from the market and farm to the pantry, helping to solve transportation issues for students and allowing them to access both shelf-stable pantry items and fresh produce at the same time at one convenient location. The market is also exploring pop-up locations, whereby the market would set up directly at the pantry.

The downside for both programs is that peak growing season occurs when students are not on campus. Potential solutions to this challenge include growing crops for spring or fall harvest, using hoop houses and other season-extending systems, and preserving summer produce through canning, freezing, and other food preservation techniques.

Funding these programs requires flexibility. Rutgers–New Brunswick covered the farm expenses for the 2019 growing season. Since then, the farm has secured private and university funds to subsidize future years. In the past, the market voucher program has been funded through donations from varying sources. The market is exploring the option of produce donations by farmers and/or market shoppers.

As part of their efforts to address food insecurity on campus, Cuite and her team applied for funding from the state’s Hunger-Free Campus Act signed by Gov. Murphy in 2019. Rutgers-New Brunswick and Rutgers University-Newark will now receive almost $200,000 to fight student hunger, leverage more sustainable food solutions, raise awareness of current campus services and continue building strategic partnerships at the local, state and national levels to address food insecurity among students.

This articles originally appeared in the summer edition of Explorations.