Whether they’re helping the campus community or their neighbors in town, these students are on a mission to give back. 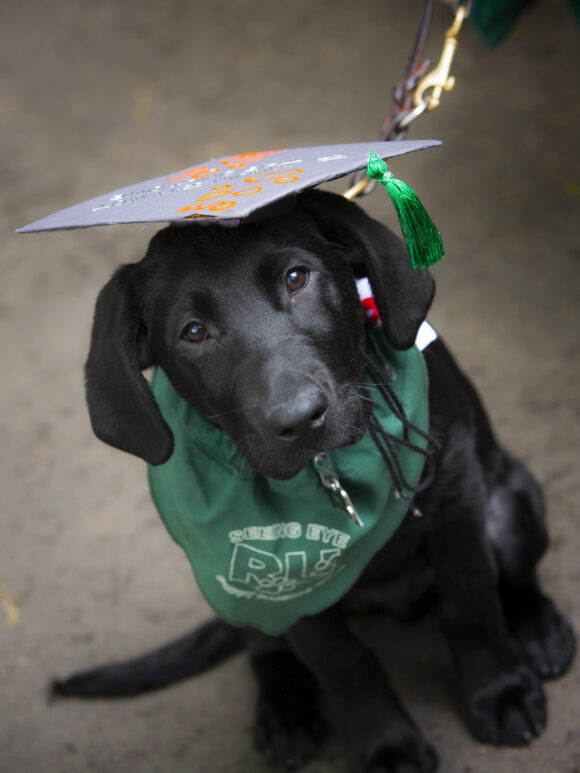 Ash C. Dunlevy SEBS’21, vice president of the RUSEPRC, knew he wanted to join the club before he even started as a student. “I had come to the SEBS Honors Program open house, and I ran into a fellow with a puppy just sitting in the student center,” he recalls. “I was delighted by the idea that you could be a student, live on campus, keep up with classes, and also engage and give back in such a fun way.”

Club members have different roles, all in support of one mission. Puppy raisers have the most responsibility, receiving a puppy at seven weeks old and being the primary caregiver until the puppy is about 15 months old. Sitters step in when raisers need a helping hand. And general club members help with events and meetings. “We have a strong identification with the G.H. Cook campus,” Dunlevy says. And, as the club arrives at its 20th anniversary, Rutgers students—especially SEBS students—have a special connection to the dogs and mission in return. Why?

“There’s a general positivity we bring to campus, I think,” Dunlevy adds. “Professors and students love having the puppies in class, and there’s something to be said for a campus that supports this club. We’re not just any old campus—we’re the campus where students have dogs for charity.”

The puppies go everywhere the students go, with very few exceptions. “We housetrain them, teach them basic commands, and most importantly, provide exposure training,” explains club president Emily Dela Cruz SEBS’20. “We don’t know if the dog will end up in a suburb, city, or rural setting, or with someone young or retired. So we make sure they see all kinds of people and places, and hear all kinds of sounds.” This means most SEBS students encounter the dogs at some point, and derive a unique benefit in addition to the one the club provides The Seeing Eye and its beneficiaries.

In return, raisers and club members alike gain valuable time management skills and learn the importance of commitment (especially if they’re raising a puppy while taking on a full course load). “A lot of people think we’re teaching these puppies, but we’re learning a lot more than we’re teaching,” says Dela Cruz. “I’ve learned to be more responsible, but I’ve also learned to be selfless. The club and The Seeing Eye are made of the greatest group of people who want to make a difference in the world.” 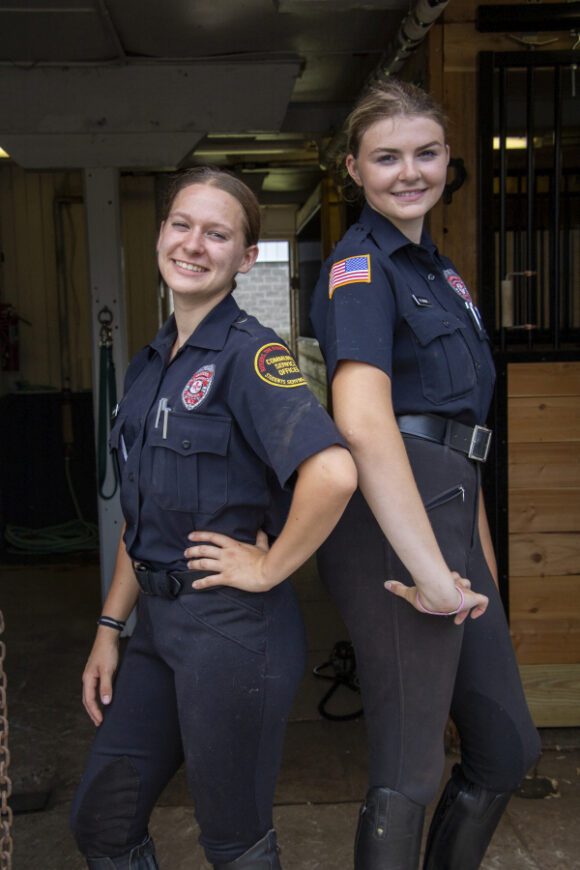 Kaitlin Quinn SEBS’21 has been coming to Ag Field Day since she was a child (her mother is a Cook College grad), and she remembers seeing the Mounted Patrol officers on campus. When she arrived at the Admitted Student Open House as an incoming freshman, she was happy to see they were still around. “I went to the Facebook page, and asked how I could get involved,” she remembers. “I’ve always been involved in service, so when I came to campus I wanted to continue.”

Rutgers University Mounted Patrol is the only student-run mounted patrol in the country, and plays a vital role as part of campus security. Every student serving on Mounted Patrol is a Campus Security Officer, with a direct line to RUPD, and responsibilities ranging from canvassing the campus to enforcing the handbag policy at football games (which, alone, is a lesson in patience, customer service, and communication). But their value extends well beyond their formal job descriptions. “We’re ambassadors of public safety,” says club president and company supervisor Lara Watrous SEBS’20. “People are more prone to come up to us when we have the horses because they want to pet them or ask us questions. They may not feel as comfortable approaching us if they see us simply walking about in a reflective vest.”

In addition to serving the campus community, these students are also strengthening the university’s ties to the surrounding community, by participating in university events open to the public. This past fall, for example, Mounted Patrol brought the horses to the Graveyard Smash, a safe trick-or-treating option for New Brunswick children. “There’s usually a stigma against any kind of law enforcement, which I can understand, but Mounted Patrol brings people together,” Watrous says. “We help bridge that gap and show people that we’re not all bad. We’re nice people and you can pet the horses!” 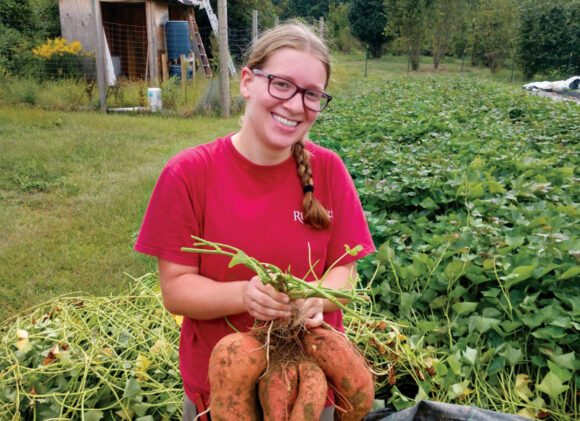 Rachel Rapach SEBS’21, an agriculture and food systems major, wasn’t sure what she wanted to do when she graduated. What she did know was that she enjoyed gardening and growing things. So she became a summer intern at the Rutgers Gardens Student Farm. Farm interns have a range of responsibilities, from starting seedlings and prepping beds to installing drip irrigation, hand-tilling, harvesting, and selling produce at the farmers market. Along the way, they learn how to grow food, but also hone their responsibility, creativity, and organization skills. “Farming is harder than it seems,” says former intern Ameen Lotfi SEBS’20. “It takes a lot of intellectual and physical skills, as well as a deep sense of timing. It’s an art.” And, it’s one that gives back. 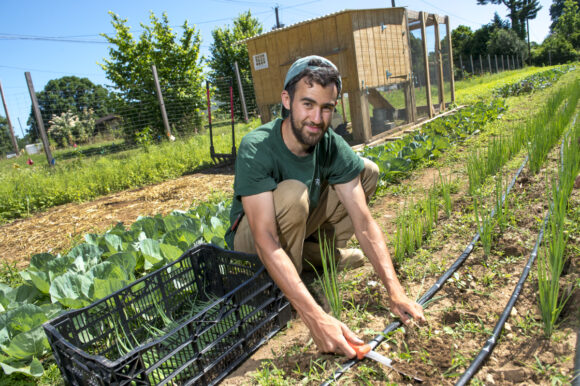 In addition to the market, produce from the farm finds its way to local food pantries like Elijah’s Promise in New Brunswick and the Rutgers Student Food Pantry, which is a new partnership started this year on the heels of reporting that one-third of Rutgers students are food insecure. “This helps those who need food and use the pantry to get something nutritious,” says Rapach. “A lot of the time, the food pantry has boxed or canned food—which is valuable—but we can supplement that with lettuce, kale, chard, eggplant, tomatoes, potatoes, and other fresh foods.”

That said, the farm’s reach goes beyond those who enjoy its bounty. “We’ve lost our connection to food,” says Lotfi. “The farm helps us reestablish that connection.” Plus, since it’s located at Rutgers Gardens, anyone can stop by and learn more. “There’s a lot of people who come to the farm to see what’s available or walk around,” says Rapach. “It gives them the opportunity to see how food is grown and what plants look like, because not a lot of people know what plants look like with fruit on them!”

Editor’s Note: this article originally appeared in the magazine Explorations.