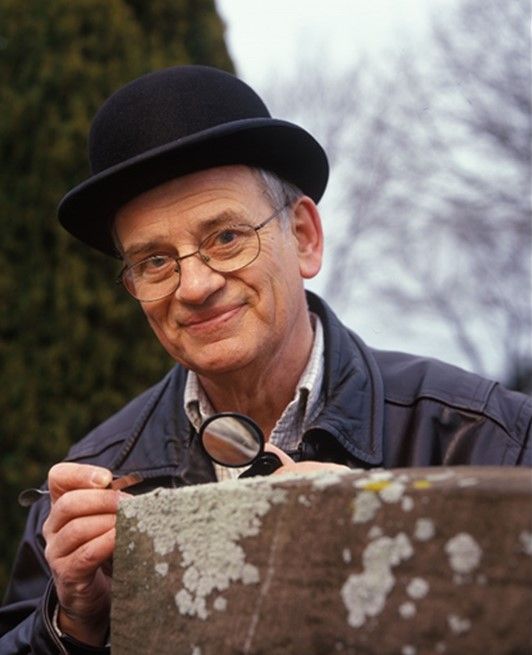 By Max Häggblom, distinguished professor and chair, Department of Biochemistry and Microbiology

It is with great sadness that we report that Douglas E. Eveleigh, an emeritus Distinguished Professor at Rutgers University, died on Dec. 30, 2019 of complications of a glioblastoma.  Prof. Eveleigh served on the Rutgers faculty for forty-five years, where he was known as an exceptionally fine teacher and scholar. Professor Eveleigh’s interests ranged broadly from applied microbiology (fermentation and degradation) to the history of science. Students loved his infectious humor and his skill at enlivening the study of microbiology on topics that ranged from alcoholic fermentation to the generation of swamp gas.

Born in West Croydon, Surrey, England in the United Kingdom on December 6, 1933, Dr. Eveleigh earned a B.Sc. (External Degree) at the University of London, UK (1956) and a Ph.D. in Mycology from the University of Exeter, UK (1959).  While at the University of Exeter, he studied under G.C. Ainsworth (1905-1998), a towering academic figure who nurtured Doug’s love for the world of fungi since age 6 and the study of scientific history. During his student years, Doug was a serious amateur rugby player, a hobby that led him to accept a postdoctoral position at National Research Council (Halifax, Nova Scotia, Canada), where he could combine his love for science and his love for sports.  In 1961, he moved to a job at the U.S. Army Laboratories (Natick, MA) working under Elwin Reese and Mary Mandels. As a member of the Boston Rugby Club he attended a dinner dance of this club where he met his wife Linda Sterenberg on a blind date. They married in June 1962 and then moved to a post-doctoral research position with Stan Knight, Dept. of Bacteriology, Univ. of Wisconsin (Madison, WI).  Their first son, Chris, was born in 1963.  A second son, Rob, was born in 1966 in Saskatoon.  After a second stint with the Canadian National Research Council (1965-70) in Saskatoon, Saskatchewan, Canada, in June 1970 Doug accepted a job (hired by Jim Macmillan to teach David Pramer’s General Microbiology course) at Rutgers, The State University of New Jersey in what is now the Department of Biochemistry and Microbiology, where he remained for the rest of his career and rose to the rank of Distinguished Professor.

Professor Eveleigh’s research program focused on the metabolic capabilities of filamentous fungi.  In particular, he studied the ability of certain common soil fungi to make enzymes that degrade cellulose, and his group pioneered the use of fungal enzymes to turn plant wastes into biofuels. As one example, in a proton magnetic resonance study of the anomeric species produced by D-glucosidases (D.E. Eveleigh, A.S. Perlin. Carbohydrate Research 1969, 10, 87-95. DOI: 10.1016/S0008-6215(00)81090-3) he demonstrated the anomeric configuration of sugars released during enzymatic hydrolysis of some D-glucosides and D-glucans suggesting that the stereochemical differences may originate in differing affinities of the enzymes for various regions of the substrates. His research on enzymes from the soil fungus Trichoderma is a cornerstone of several contemporary commercial ventures in bioenergy and his fungal strains continue to be used in industrial fermentation around the world. Moreover, some of the mutant strains he isolated for the Army while at Natick produced enzymes used to this day to “eat away” at cotton in denim fabrics, giving them the distressed, worn-out look desired by the fashion industry.  He also was instrumental in patented work on Beano, obtaining fuels from biomass, and substitute sweeteners. He had numerous other research interests, ranging from the nitrogen-fixing bacterial symbionts of bayberry to the diversity of lichens on gravestones.

In addition to his laboratory research, Professor Eveleigh had a passion for microbiological history.  He often visited library archives in Europe and the United States where he gained expertise in the degradation (e.g., foxing) and the conservation of antique manuscripts, and in the decay and wood rot of old ships (e.g., HMS Mary Rose + USS Constitution).  He excelled at scholarship and teaching at all levels, as an instructor of undergraduate and graduate students, as a mentor to post-doctoral and visiting scholars, and as an educator of the broader community through his extensive outreach activities.  Several of his students have said that he literally had rescued them! Through all aspects of his life, Doug was a bottomless pit of enthusiasm.  His energy was particularly infectious (appropriate for a microbiologist).  He knew how to combine teaching, research, and the study of microbes into what he always called “sheer fun.” At one point midway in this 9-month journey, following a shunt surgery to deal with hydrocephalus, he uttered to his wife: “I’ve raised a family, I’ve done research, I’ve had full support, and I am very happy.”

Over his career, Professor Eveleigh taught over 6000 undergraduate students and trained over 50 Ph.D. and M.S. students.  His knowledge and energy elicited curiosity and his collection of interesting vignettes inspired students to explore more. Many of his former students have gone on to distinguished careers in academia, industry and government, and they remember him as an engaging mentor who developed their abilities to think independently and instilled microbiological research with an element of joy.  He also was instrumental in honoring past major innovations in the field of microbiology at Rutgers and beyond, organizing several anniversary symposia on streptomycin and other antibiotics discovered on the Cook College campus (yes, the old Ag School).  One of his personal favorites in outreach was the 2008 re-enactment of the classic 1783 experiment by General George Washington and Thomas Paine of their discovery of the nature of the fiery Will-O’-the-Wisp of marshes and rivers. Doug provided the inspirational leadership and organization, and “It’s a Gas!” was heard across the Millstone River in Rocky Hill, NJ, at the site of the original experiment. Recently, he was one of the lead instigators of the State Microbe initiative whereby in 2019, Streptomyces griseus, the producer of streptomycin, was formally designated as the New Jersey State Microbe. In June, 2019, Doug gave a well-received presentation on the history of Streptomyces griseus at the ASM Microbe (the American Society for Microbiology annual meeting) in San Francisco, following brain surgery, radiation, and chemotherapy treatments.

During his lifetime, Professor Eveleigh received many honors and awards. He served as a Director of the Society for Industrial Microbiology from 1989-1999 and was a Fellow of both the American Academy of Microbiology and The Society for Industrial Microbiology.  In 1989, he was the recipient of the first Waksman teaching award given out by the Society for Industrial Microbiology. In 2001 he became the inaugural holder of the Douglas and Linda Eveleigh and Dennis and Linda Fenton Endowed Chair of Applied Microbiology in the Department of Biochemistry and Microbiology at the Rutgers School of Environmental and Biological Sciences.  In 2013, he was honored with the School of Environmental and Biological Sciences Teaching Excellence Award.  He was always an active Rocky Hill community and Mary Jacobs Library member.  He was fruitfully involved with the Theobald Smith Society, the New Jersey Mycological Society, the New Jersey Medical Historical Society, and NEMPET (Northeastern Microbiologists Physiology, Ecology and Taxonomy).

Doug Eveleigh is survived by his wife of 57 years, Linda; his sons Chris (and partner Kim) and Rob; his daughters-in-law, Paula Nolan and Laura Robinson; and his grandchildren, Douglas and William. He is mourned by hundreds of former and current students, coworkers and friends who remember his amiable, eternally optimistic, and mischievous character.   On hearing of Doug’s illness, his colleague Dr. Elio Schaechter, described him as founding a whole new field of Microbiology—“Humanistic Microbiology,” acknowledging Doug’s focus on the human aspects of the profession, a “humicrobiologist.” On hearing of his death, Elio wrote again to say: “To know him was to like him.”  These words serve as an appropriate epitaph.