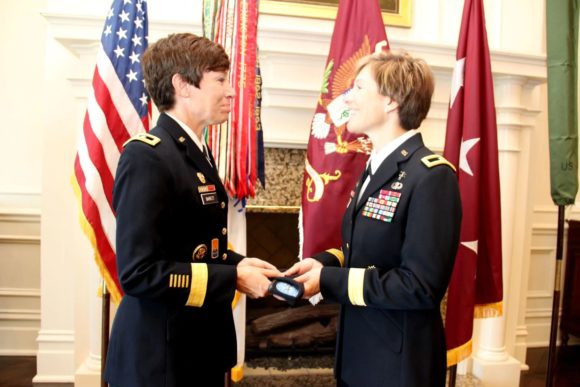 One sister had wanted to be a soldier since she was young; the other planned to have a career in the Foreign Service. Both marked a milestone for the U.S. Army this summer: Maj. Gen. Maria Barrett and Brig. Gen. Paula Lodi (CC’90) are believed to be the first pair of sisters to become generals, the military branch’s highest category of rank.

“The fact that both of us would have come from the same family, it almost makes you want to go out and get a lottery ticket,” Barrett told The Washington Post. “Except, this is not a game of chance. It is hard work, it is strong leadership skills, it’s strong technical competency. Then you realize that this is a very tough bar in and of itself for both of us to make it.”

Their rise to the general’s rank signals to younger soldiers that women can fill prestigious leadership roles in many sectors of the traditionally male-dominated Army, said Emma Moore, a research assistant for the military, veterans and society program at the Center for a New American Security, a bipartisan think tank that studies national security.

“They’re testaments to the fact that you can join the Army and have very different experiences and rise to the top,” Moore said. “There’s a job for anyone and everyone in the military.”

Lodi, 51, was promoted to general on July 12 and works as the director of health care operations for the Army’s surgeon general. Barrett, 53, is the commanding general of NETCOM, which runs the Army’s cyber networks.

About 16 percent of the military’s 1.3 million active-duty personnel are women, according to the Council on Foreign Relations. A natural bottleneck in promotions means more women occupy low-ranking leadership positions than high-ranking ones, Moore said.

The military has sometimes struggled to adapt to increasing numbers of female service members. Sexual assaults reported in the military increased by 38 percent last year. Women’s medical issues are often brushed off or misdiagnosed. Body armor was designed for men until the branches began adding new sizes a few years ago.

Still, there have been bright spots.

Barrett and Lodi joined the Army shortly before 1994, when the Pentagon opened to women all roles except direct combat jobs. That opportunity, Moore said, paved the way for women to prove themselves and advance within the Army. The Pentagon opened all combat roles to women in 2015.

Barrett and Lodi grew up in Franklin, Mass., with a father who was a veteran of World War II, but Barrett said he rarely talked about his time in the military. Both parents, however, instilled a sense of public service in their five children through their work in local schools. Their mother was a teacher, while their father was an elementary school principal.

Seeking a college scholarship, Barrett joined the Reserve Officers’ Training Corps at Tufts University and planned to serve in the Army for a few years before joining the Foreign Service. She discovered she loved the military. Barrett said that after leading soldiers during the Persian Gulf War, accruing valuable experience and meeting her now-husband, she decided to stay.

“It’s a confluence of a whole bunch of things coming together,” Barrett said. “And you go, ‘I think I can serve my country a different way than I had originally planned.’ ”

Many of the women in combat roles whom Barrett met told her they were dissatisfied with the limits placed on their contributions, while she said the women who worked in the communications field generally felt more fulfilled. So Barrett said she followed the latter path, which took her to assignments in the United States, Kuwait, South Korea, Germany and Saudi Arabia. She became a general in December 2015.

When she was roughly 8 years old, Lodi watched a documentary about the first women to attend the U.S. Military Academy. She said she felt drawn to the Army’s leadership, athletic challenge and notion of service to country, she said, so she later joined ROTC at Rutgers University.

After she was commissioned into the Army, Lodi said she attended officers’ basic training in San Antonio and then deployed to her first assignment in Germany — a humanitarian assistance mission called Operation Provide Comfort during the Persian Gulf War. Lodi planned to work in operational assignments for about a decade and then become a dietitian for the Army, she said, but she eventually decided to stay in operations.

As a woman in the male-dominated military, Lodi said she mostly tried to downplay her gender and let her abilities speak for themselves. Eventually, she said, she came to embrace that younger female soldiers may look up to her. Lodi has been married for 25 years and has two daughters, so she said women often ask her for advice about having a family while in the military.

“I think it’s different for everyone,” Lodi said, “but I think if you are blessed to find something that you love doing and then to have an incredibly supportive family, you tend to figure it out.”

At Lodi’s promotion ceremony in July, the sisters came together in their newly similar professional capacities. Barrett presented Lodi a beret with one-star rank insignia, symbolizing the history of women in the Army and the sisters serving together as generals.

Throughout what she called “a great career,” Barrett rarely thought about the relatively unique space she occupied as a woman in the Army, she said. After USA Today first reported on her and Lodi this week, however, she said women reached out to tell her she was a role model for them or their daughters.

“Even though I don’t feel like every day it’s about being a woman, you are setting an example, whether you recognize it or not,” Barrett said.

Editor’s Note: This article originally appeared in the Washington Post.