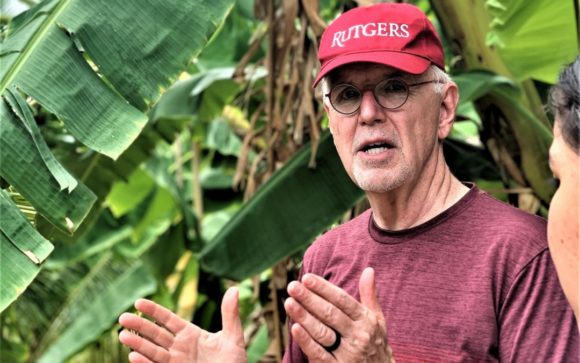 In 1973, when Robson’s mother dropped him off on campus for his first day of college, he had no idea that he’d be at Rutgers for 46 years (and counting). His undergraduate education in agricultural science inspired his pursuit of graduate degrees in plant science, which he followed-up with a master of public health degree in environmental and occupational health. In 1979, he joined the faculty as an instructor in the Department of Entomology, as the pesticide safety specialist for Rutgers Cooperative Extension.

Robson’s career at Rutgers embodies the university mission of research, education, and service, and he is a natural collaborator as a core faculty member of Rutgers Global Health Institute.

The Complexities of Healthy Farming

Robson studies environmental exposures to agricultural chemicals and their effects on rural populations, especially farmers and their children. Many of these people live in developing countries, where there are minimal or no standards for the safe use of the chemicals.

His research program has resulted in more than 150 peer-reviewed publications on dozens of niche topics, such as the reproductive effects of pesticide exposure on groundnut farmers in Myanmar and arsenic-contaminated water in agricultural regions of Thailand. An educator at heart, Robson combines these explorations and insights with teaching, curriculum development, and capacity building throughout Rutgers, New Jersey, and the world.

An Eye-Opening Trip to Thailand 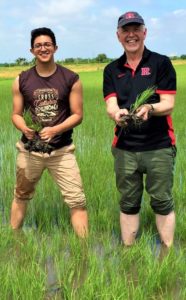 While visiting a former Rutgers classmate in Thailand in 1995, Robson—who grew up on a fruit and vegetable farm in southern New Jersey and had thus far focused his career on farming practices in the United States—witnessed first-hand many disparities that still exist with regard to safe handling of farm chemicals.

“In the United States, the methods have changed dramatically,” Robson says. “Meanwhile, in Thailand, where 70 percent of the population is rural and involved in agriculture, the risks are great and the problems are growing because of the push for rural people to grow more food and use more chemical inputs to increase their crop yields. I realized during that initial Thailand trip that, as both a toxicologist and a person with a farming background, this is an area where I could help.”

Robson has worked in 20 countries and has made significant contributions in southeast Asia. A current undertaking is the agricultural health course that he developed and teaches in Thailand through a partnership with Bangkok’s Mahidol University and the University of Massachusetts. The course is part of a Global Environmental and Occupational Health (GEOHealth) Hub project sponsored by the Fogarty International Center at the U.S. National Institutes of Health. Fogarty’s GEOHealth program supports institutions in low- and middle-income countries that are serving as regional hubs to address high-priority environmental and occupational health threats.

Robson’s compact course (40 hours over four to five days) introduces postdoctoral trainees from throughout southeast Asia to a broad range of agricultural health issues, using regional examples for the case studies. In the classroom, Robson covers topics related to pesticide exposure and health hazards: musculoskeletal, respiratory, and skin diseases, including cancer; acute traumatic injuries; gender differences and special risk populations, such as children of farmers and marginalized crop workers; benefits and hazards of pesticide use; and organic farming.

True to his calling for capacity building, Robson will be turning the course over to the Thai partners this year to further develop the program.

Advice for Students: Get Involved

Six pages of Robson’s CV are filled with names of students and scholars throughout Rutgers and internationally (Pakistan, Philippines, Thailand) whom Robson has mentored or advised—formally. A fixture in student life, countless others have benefited from his passion for higher education.

Robson is a leader in Rutgers Global Health Institute’s student engagement efforts, which include launching a student council and co-curricular programming. His advice to students who are exploring global health:

“Roll up your sleeves—get involved. Join GlobeMed, Global Brigades, or a similar student group. Take a service-learning class or a semester abroad. Get to know faculty who are doing global work, and see if there is a place for you in their program. Seek out options here on campus and nearby at the United Nations to meet people in the field, learn about their work, or take advantage of a volunteer opportunity.”

Learn more about the Rutgers service-learning course that Robson leads in Thailand.

Editor’s Note: this article was written by Lori Riley and originally appeared on the Rutgers Global Health Institute website.