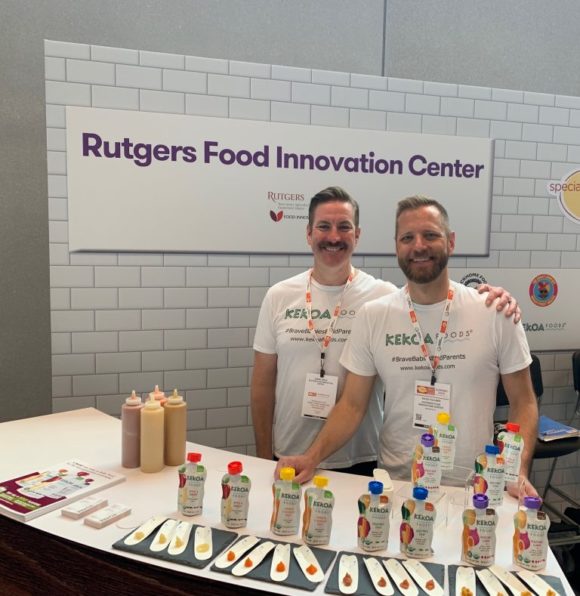 Six years ago, David Fullner and Daniel Auld had their hands full with a son born eight weeks premature.

A focus on his diet to keep him healthy inspired them to blend their own baby food, with the added benefit of introducing him to real, not-too-sweet flavors to keep his palate expanding and avoid creating a reliance on sugary foods early in life.

Curious parents gave them the idea to market their baby food, which comes in flavors like Vegetable Curry and Apple and Ginger, and an introduction to the Rutgers Food Innovation Center enabled them to conduct market research on a broader scale than just their inner circle of young moms and dads.

In the beginning of July, the FIC also allowed Fullner and Auld to present their pouched baby food brand Kekoa Foods to the thousands of attendees at the Fancy Food Show, widely regarded as the specialty food industry’s most important event, where buyers from retailers and restaurants all over the nation come to see what’s trending and what they should be putting on their shelves.

Generally, pre-market companies like Kekoa cannot participate in the Fancy Food Show—which is meant to produce meaningful relationships with purveyors that can provide enough unique food to stock shelves at big-box level stores. But for the fourth year, the show’s Incubator Village gives small producers a chance at real exposure, and a place to ask questions while they still can.

Twelve incubators from around the country, including the FIC, attended.

“[It’s] the opportunity for them to get education from these seasoned buyers. [They can] feel free to not know everything and to not pretend they know everything,” said Erika Sipos, the SFA industry relations specialist that ran the Incubator Village. “Buyers coming know that they don’t know everything, and they’re willing to pick up on the cues of uncertainty and to have a very educational and constructive conversation.”

On the show floor, said FIC Associate Director of Business Development Diane Holtaway, not knowing something like pricing structure can be fatal for businesses.

“That’s very difficult for startup companies,” said Holtaway, who worked in the consumer packaged goods sector for years and has attended the show regularly over the past three decades. “A distributor might come by and ask, ‘what’s your distributor price?’ A retailer might come by and say ‘what’s your wholesale price, do you sell direct?’ There’s a different formula depending on who you’re selling to, and if you mess that up on the floor, that buyer may never come back.”

The business expertise available from an incubator already makes companies like Kekoa more savvy than their counterparts, she said. Kekoa originally enlisted the FIC’s services for market research around packaging and around sensory evaluation. Focus groups of moms and caregivers were asked about taste profiles, textural differences between Kekoa and typical puree-only baby food, and pouch versus jarred packaging.

“A lot of parents who make great customers for us are trying to make their own baby food, and they just don’t have enough time,” Auld said. “So they love this as an option to throw in their bag and serve it throughout the day, and they don’t have to worry about it going bad for weeks or even months.”

This fall, the FIC will deepen its relationship with the Specialty Food Association, which has put on the Fancy Food Show for 65 years, when an FIC sensory evaluation becomes required for admission into the association.

The SFA considered four academic institutions for the sensory evaluation role, ultimately settling on Rutgers because it offered the most expertise at the best price.

“We’ve worked with Rutgers for many years, and we knew that they do very good sensory evaluation and have a lot of experience doing that,” said Ron Tanner, vice president of philanthropy, government, and industry relations at SFA. “We have 3,800 members with 200,000 different products. [Starting in the fall], we want their products to be tasted and evaluated by experts before we admit the company as members of the association. So we want sensory evaluators, and Rutgers is excellent at that, to be tasting the products.”

The sensory evaluation will be one aspect of a layered application process, and will be similar to ones FIC clients like Kekoa have undergone.

For Fullner and Auld, sensory evaluations of their product included getting past what the focus group was accustomed to and explore what they were open to.

“This is a huge change to how American moms think about baby food. Ethnic moms have for centuries been feeding their babies vegetables with spices in them, but Americans haven’t,” Holtaway said. “Where do you see carrots with burdock root? Where do you see curry? But having ethnic flavors in baby food is common in other cultures. We’re just the anomaly.”