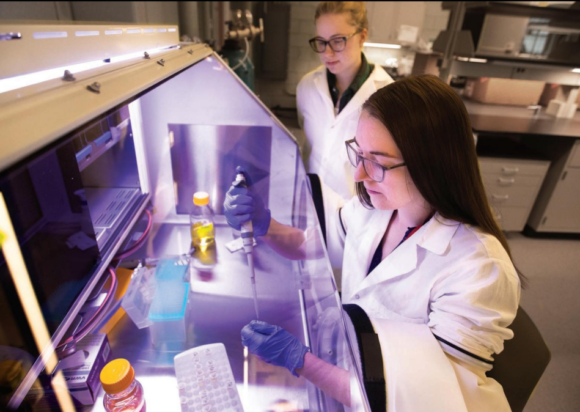 The Department of Biochemistry and Microbiology has a rich history, established in 1901 as the Department of Soil Chemistry and Bacteriology, and one of the first of its kind in the country. Today, it builds on this vibrant history by focusing on the environmental aspects of microbiology, biochemistry, and toxicology through two under-graduate programs and a microbial biology graduate program. 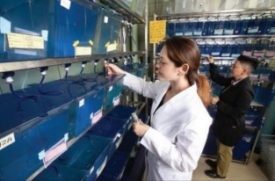 If there’s one thing that defines the history and future of the study of biochemistry and microbiology, it’s collaboration. It was collaboration that first merged these two previously separate departments in 1965 to become what it is today, and it’s what will propel groundbreaking research in both areas moving forward.

This spirit of working together is alive and well when it comes to microbiology, even within Rutgers’ own campus. “Microbiology is so widespread at Rutgers,” says distinguished professor and department chair Max Häggblom. “There are microbiologists at a dozen or more departments across the university, and our department is tasked with bringing all of this expertise together.”

One way the department does this is through its annual Microbiology Symposium, which began in 2007 to bring together microbiologists across diverse departments such as food science, plant biology, marine and coastal sciences, chemistry, genetics, engineering, and more. During the symposium, faculty from across the university gather to share research and open the lines of communication for collaboration. Roughly 50 to 70 students and postdocs are also able to share poster presentations of the work they do to spread the word. 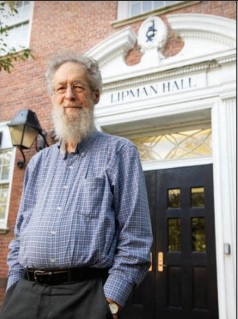 Celebrating Decades of Leadership Professor Peter Kahn joined the Department of Biochemistry and Microbiology in 1976 on a handshake. His research space at that time consisted of half a bench in an old lab. The campus, of course, had no computers then. Nor did it have a spectrophotometer capable of assaying enzymes and measuring spectra. Kahn convinced the dean it was needed, and built a table himself for the device—on which, by the way, it still sits despite many upgrades over the years.

With a 40-plus year history at the university, Kahn shows no signs of slowing down. This past May, he won the prestigious 2018 Clement A. Price Human Dignity Award in recognition of his leadership in the Bosnian Student Project, which placed students whose education had been disrupted by the war in various high schools and colleges across the U.S. As a local coordinator for the project, Kahn raised funds to cover the expenses needed by 17 students earning degrees at Rutgers (outside of tuition, which was covered by the university).

If you ask associate professor Lori White, trends in biochemistry research will also rely heavily on interdisciplinary efforts going forward—especially since big data will continue to play a pivotal role. “This is an area that’s somewhat in its infancy, but won’t be going away any time soon,” she says. “It takes a certain type of person to go into this field. You need to have a good math brain for it. You need an understanding of computers.

And you need extensive biological knowledge. But it also is an area that lends itself quite well to collaboration.” According to White, enlisting researchers from across disciplines brings new approaches to new questions. Such questions range from the foundational (like the impacts of protein structure on function) to the topical (like how environmental chemicals impact development).

Yet another question addressed by this department surrounds the human microbiome, “which can’t be discussed enough,” White says. While studying the microbiome—the ecological community of the human body—isn’t necessarily a new idea, the way in which researchers are approaching this topic is somewhat new. “Developments in biotechnology require an understanding of the microbial world,” Häggblom says. “It started with antibiotics but today is expanding to questions of remediation and bioenergy applications.”

Plus, he adds, there’s been a paradigm shift in how researchers and even the public consider the human body. Microbes are no longer considered simply the cause of disease, but rather understood as also promoting health. “This means there’s a focus on the microbial community overall—an ecology,” Häggblom says. “This has changed the way we think about the microbiome, and the recognition that these microbiota can affect human life from birth through death. This is playing out in research across our department.”

For many science students, tightly structured programs can make studying abroad difficult. But the department is taking steps to ensure that its students have the opportunity to travel and study internationally, even as undergraduates.

One way students can get this invaluable experience is through a course called The Microbiology and Culture of Cheese and Wine, an elective for both biochemistry and microbiology majors offered during the summer in France. Over the course of two weeks, students learn about the science behind cheese and wine, but also their cultural importance. “This was designed specifically to get science students abroad,” says Häggblom, and attracts students from within the department but also from majors like food science.

Yet another way the department promotes international travel is through conferences. “Travel awards from alumni donations have played a major role,” says Häggblom. “They allow us to provide funds for students to attend a meeting and present, and make connections while they’re there.”

When students graduate from this department, they find opportunities in graduate schools, medical schools, or industry. They emerge with impeccable lab skills in biochemistry and microbiology. But where additional support is needed—especially from alumni—is in gaining real-world experience as interns. Perhaps surprisingly, internships can be very hard for Rutgers biochemistry and microbiology students to find, even in New Jersey where there’s a strong pharmaceutical presence. “Our students are smart, and willing to put the work in,” White says. “If they decide they want to go into industry, they’re an asset for any team. So reaching out, networking with the department, and offering these internship opportunities is a great way for alumni to get involved.”

Editor’s Note: this article originally appeared in the Fall 2018 edition of Explorations.