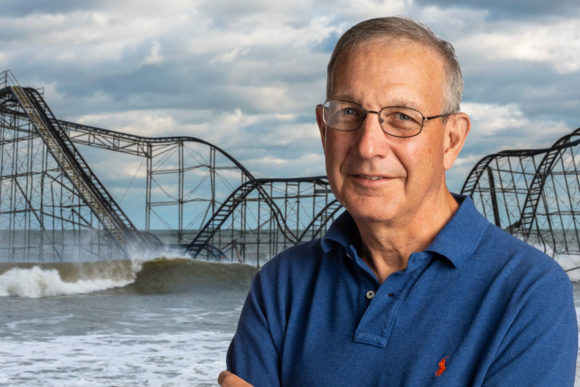 Ken Miller, a distinguished professor in the Department of Earth and Planetary Sciences. Photo: Nick Romanenko.

The Rutgers Climate Institute comprises more than 100 distinguished researchers representing 17 schools and programs in the natural and social sciences as well as the humanities. As observers of the natural world, they have been among the first to sound alarms about the potentially catastrophic impact of the earth’s changing climate – from rising sea levels and warming temperatures to severe drought and the proliferation of wildfires. They’ve testified before Congressional panels, received accolades from their peers and are frequently quoted in the news media. This article is the first in our series about the Rutgers Climate Institute.

As a geologist who studies the strata of rock layers and the microfossils found within them, Ken Miller, a 1978 Rutgers College graduate, has focused his research on climate and sea-level changes going back to the age of the dinosaurs. He’s taken part in nine scientific cruises and since 1993 has been chief scientist of the New Jersey Coastal Plain Drilling Project, which has dug thousands of feet into the soil at 17 sites along the Jersey Shore and yielded valuable records of sea-level changes as far back as 100 million years ago.

The Coastal Plain Drilling Project produces samples, or cores – Miller describes them as “10-foot-long donut holes”– taken from as deep as 1,500 feet below the land surface. During a $13 million offshore drilling venture in 2009, Miller and his colleagues, working in about 100 feet of water, retrieved samples from 2,000 feet at three separate sites about 20 miles off the coast of Barnegat Light, New Jersey. At last count, Miller says, the project has dug 25,000 feet of core. His research has shed light on what he calls “the greatest hits of Earth history,” including the Cretaceous-Paleogene mass extinction, some 65 million years ago, which wiped out half of all species on the planet, including the dinosaur.

Five years ago, Miller and colleagues, including Rutgers scientists Robert Kopp, Benjamin Horton and James Browning, a 1996 graduate of the Graduate School–New Brunswick, authored a research paper, published in the journal Earth’s Future, based on their research into past sea-level activity from New York to Virginia.

“In New Jersey,” they wrote, “it is extremely likely that sea-level rise in the 20th century was faster than during any other century in the last 4.3 thousand years.” Miller adds, “We can say unequivocally, looking at sea-level records, that what’s going on now is unprecedented.”

Those results might help explain Miller’s frustration with climate change deniers. “It greatly concerns me,” he says. “There’s always going to be people who are not going to acknowledge reality – which is the nicest way I could put it – or want to live in their own reality. To not acknowledge there’s a problem is sticking your head in the sand.”