Some of the participants who helped create the fabric braid are seen here assisting with the official measurement.

Sue MacCombie wanted to find an activity that would bring the community together, especially the members in Somerset County 4-H where she’s been a leader for the past 21 years. Little did she know she’d succeed beyond her wildest dreams and earn a world record in the process. 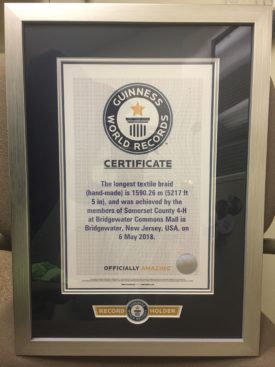 The Longest Textile Braid, measuring an impressive 5,217 feet—almost a mile when rolled out— earned the official title by Guinness World Records this year. The braid was the culmination of months of collecting and braiding fabric by 200 Somerset County 4-H members and volunteers.

This record-breaking feat, which has made Somerset County 4-H the only such program in New Jersey to hold a Guinness World Record, took years to come to fruition. In 2011, MacCombie, who leads the Somerset County 4-H Upcycle Club, which reuses and recycles old items, including turning them into works of art, was looking for an activity that would get all the 4-H members in the county involved in some way. 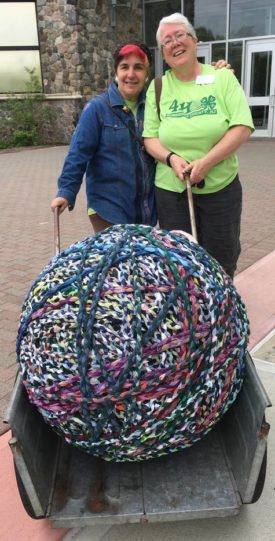 “I have a fiber and an upcycling club and we work a lot with recycled materials,” explained MacCombie. “We had all this material in bedsheets, shirtdresses, etc. and I thought it would be great to do something with it.”

She thought it would be inspiring to try to set a world record of some sort, but just what, she was unclear. So, she contacted the folks at Guinness World Records and they worked together to find a unique record to set. Together they came up with the Longest Textile Braid and over the years, they collaborated on coming up with the best plan of action to achieve it.

“The kids love to braid, so it was a natural progression. And I thought it could help promote 4-H too, because it is such a great organization and I am proud to be a part of it,” said MacCombie.

In late 2017, all the paperwork was finally approved and Somerset County 4-H was given a year in which to complete their activity. MacCombie got to work asking members and volunteers for donations – and they set to work braiding in sections. Within several months, and even without the official measurement, MacCombie knew that they had to have exceeded the record of 2,625 feet that Guinness World Records required. All that was needed was for the braid to be measured and officially recorded. 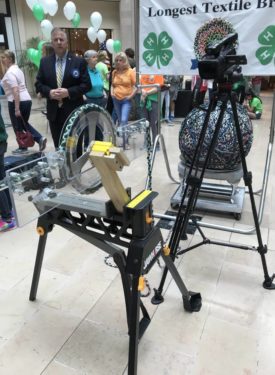 A special device was created to measure the nearly one-mile long braid.

Guinness required a licensed surveyor, so Jeff Baldwin of the Somerset County Engineering Division measured the braid while a textile expert, Bridgett Artise of Born Again Vintage and adjunct professor at the Fashion of Institute of New York, inspected it at a public event at the Bridgewater Commons Mall in May 2018.

To accurately measure the braid, Frank Marusiak of the Somerset County Facilities and Services Department created a special device, which was tweaked according to surveyor Baldwin’s specifications. Somerset County videographer Christopher Busch tracked the activity to submit as an official record while residents Kala Sivasubramanian and Reid Kirby served as the outside official witnesses.

The Longest Textile Braid, which spends its time typically rolled into a giant ball, began a tour in August, with the first being the Somerset County 4-H Fair followed by display at the County Administrative Building in Somerville.

On September 8 and 9, the braid will be at the Garden State Sheep Breeders Annual Sheep & Fiber Festival at the Hunterdon County Fair Grounds and then the Bridgewater Mall in October.