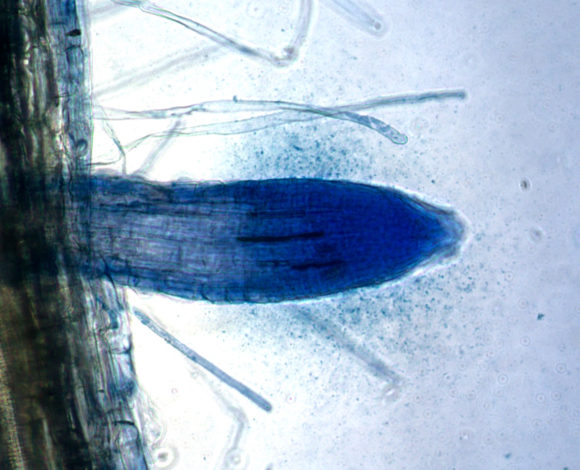 Rutgers-led study could lead to enhanced crop growth, fewer weeds and lower fertilizer and herbicide use

A Rutgers-led team has discovered how plants harness microbes in soil to get nutrients, a process that could be exploited to boost crop growth, fight weeds and slash the use of polluting fertilizers and herbicides.

In a process the team has named the “rhizophagy cycle” (rhizophagy means root eating), bacteria and fungi cycle between a free-living phase in the soil and a plant-dependent phase within cells of plant roots. Microbes obtain nutrients (nitrogen and minerals) in soil, and nutrients are extracted from microbes in the cells of plant roots. Research aimed at combatting Phragmites australis, a tall invasive reed found in wetlands in New Jersey and elsewhere, led to a study published online today in Microorganisms. Co-authors include scientists at Banaras Hindu University in India and the U.S. Geological Survey.

“The rhizophagy cycle appears to occur in all plants and may be an important way plants acquire some nutrients,” said lead author James F. White Jr., a professor in the Department of Plant Biology at Rutgers University–New Brunswick. “The discovery that plants actively cultivate and then extract nutrients from symbiotic microbes is new.”

The rhizophagy cycle works like this: plants cultivate – essentially farm – microbes around root tips by secreting sugars, proteins and vitamins, according to White. The microbes grow and then enter root cells at the tips, where cells are dividing and lack hardened walls. The microbes lose their cell walls, become trapped in plant cells, and are hit with reactive oxygen (superoxide). The reactive oxygen breaks down some of the microbe cells, effectively extracting nutrients from them. Surviving microbes spur the formation of root hairs on roots. The microbes leave the hairs at the growing hair tip, where the hair cell wall is soft, and microbes reform their cell walls as they reenter soil. The microbes acquire nutrients in the soil and the process is repeated over and over, according to White, who has been studying the sustainable cycle for seven years.

“People have speculated that plants can get nutrients from microbes, but mechanisms for transfer of nutrients from microbes to plants have been elusive – until now,” he said. “Understanding how this process works may allow us to grow plants without fertilizers or with minimal fertilizers and without herbicides. We can manipulate the system to increase the growth of desirable plants and decrease the growth of undesirable plants, potentially using the same microbes.”

Editor’s Note: this article was original published in Rutgers Today.