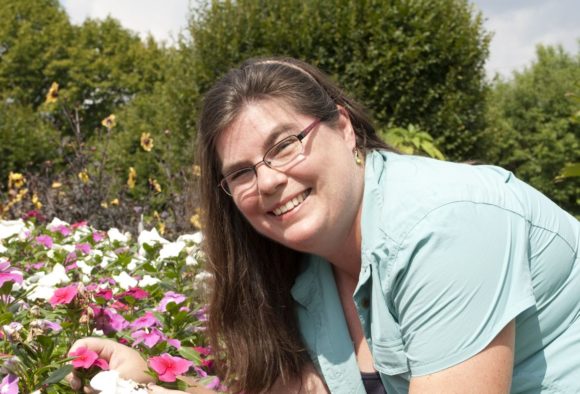 Lena Struwe, Professor in the Department of Ecology, Evolution and Natural Resources, the Department of Plant Biology and director of the Chrysler Herbarium, was presented with the Charles Edwin Bessey Teaching Award by the Botanical Society of America (BSA) at their annual meeting in July. This award recognizes outstanding contributions made to botanical instruction and celebrates individuals whose work has improved the quality of botanical education at a regional, national, or international level. The Bessey Award is the highest honor for Teaching and Educational Outreach given by the Botanical Society of America.

Struwe embodies all of the qualities recognized by the Charles Edwin Bessey Teaching Award. Not only is she an outstanding plant systematist, but also an inspirational teacher and advocate for the field. She has reinvigorated the Botany program at Rutgers, including leading an active and growing herbarium, a campus flora project and dynamic and well-enrolled botany classes. She has worked extremely hard to create new techniques and methods to help students learn. She hosts a blog on botanical accuracy (botanicalaccuracy.com) that is recognized as one of the Top 50 Biology Blogs and most recently, she founded Botany Depot (botanydepot.com), a public website allowing botany educators around the world to exchange ideas and materials. 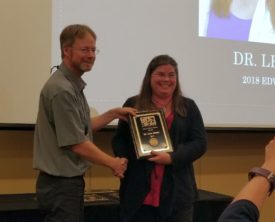 Christopher Martine, professor at Bucknell University who nominated Struwe for this award says, “As a Master’s candidate I was the student member of the search committee that hired Lena. At the time, it was pretty clear that whoever we hired would be asked to rebuild and reinvigorate the botany program at Rutgers, and Lena has absolutely broken the mold. Along the way she has utterly transformed the way that botany is taught and learned at Rutgers… and beyond.”

“Lena views herself as a learner and participates in communities that support educators. She reflects on her teaching experiences and adapts her courses to meet developing educational needs,” says Jennifer Blake-Mahmud, a PhD candidate the Rutgers School of Graduate Studies, Ecology and Evolution Program.

BSA Officer and professor at University of California-Riverside Amy Litt affirms, “There cannot be anyone more deserving of the Bessey Award than Lena Struwe, who has inspired me and many others with her passion and creativity for many years. When I was preparing to teach Plant Systematics, Lena is the person I reached out to for ideas and guidance, because she epitomizes what I would like to be as a teacher. I can only hope to have a fraction of her influence on her students, colleagues, and the public.  She is everything that is exceptional and desirable about a teacher – brilliant, positive, creative, engaging, generous, supportive, effective – the entire package.”

“I am so honored to receive this award named after Bessey, one of the great botanical educators in the US. I am grateful to all the formal and informal teachers I have had in botany, all the students that have inspired and motivated me to do better and to provide the manuals and new activities that I felt were missing,” says Struwe. “My goal is to get people engaged with the plants that surround us every day, and are present on our plates, fridges, parking lots, and lawns. I tell my students ‘Without plants you would be dead and some plants can kill you…study botany to know which plant is which.’”

The Bessey Award is the sixth award given to Struwe for her teaching. It is given annually in honor of one of the great developers of botanical education, Dr. Charles Edwin Bessey. Dr. Bessey served first as professor of botany and horticulture, and later as dean at the University of Nebraska. His work and dedication to improving the educational aspects of Botany are most noted in what Nebraskans call “The Bessey Era” (1886-1915), during which Nebraska developed an extraordinary program in botany and ranked among the top five schools in the United States for the number of its undergraduates who became famous botanists.