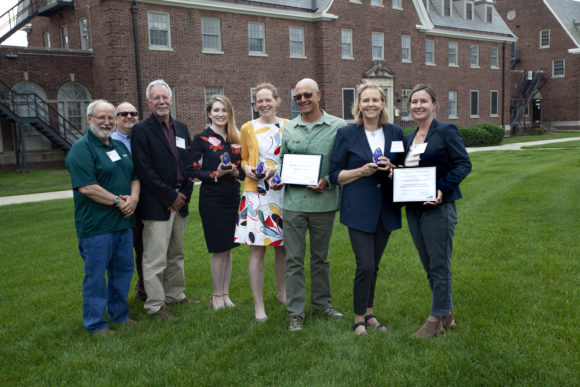 The Sustainable Raritan River Awards were announced at the 10th Annual Sustainable Raritan Conference and Awards Ceremony at Rutgers’ Kathleen G. Ludwig Global Village Learning Center on Friday, June 8, 2018.  The annual awards recognize outstanding achievement in efforts to revitalize, restore and protect the Raritan resources and promote the area as a premiere place to live, work and raise a family.

“It has been tremendously gratifying over the course of the last decade to have the opportunity to recognize local individuals and organizations who make a difference every day in the quality of life and the condition of our environment here in the Raritan Watershed. These awards are a chance to acknowledge and thank these quiet heroes as they inspire all of us to do what we can to protect the Queen of Rivers” stated Michael Catania of Duke Farms, one of the judges for these awards.

The Sustainable Raritan Awards, established in 2010, promote innovation and energize local efforts to restore and protect the rivers, streams and habitat of the Raritan River and Bay.  The awards highlight extraordinary accomplishments and inspire other groups and individuals across the watershed to achieve comparable levels of excellence.

This year’s recipients and a description of their achievements are as follows:

Associate professor, Department of Landscape Architecture, Jean Marie Hartman has developed two classes (Tracing the Raritan, and Watershed Management) to directly engage students in research on the Raritan River and the Raritan Basin. She consistently encourages students to frame graduate work using the Raritan River as their laboratory. Her contributions to our understanding of the plant ecology, salt marsh function, and riparian forests of the Raritan Basin, and to our understanding of the relationship between land use and stream water quality in the Raritan, are invaluable. Equally important is Professor Hartman’s deep and selfless commitment to supporting all those who work to address the issues that face the Raritan. Professor Hartman has time and again leveraged her understanding of the ecology of the Eastern Seaboard and her connections with those in the government, research and non-profit sectors in the area, to help local non-profit organizations frame and implement research agendas, set goals for meeting water quality standards, develop approaches to cultivate public awareness of watershed issues, and put our Raritan Basin and Raritan River on the path to improved environmental health.

Debbie Mans has provided key leadership on numerous issues related to the Raritan Watershed in several governmental and non-governmental roles during the course of the last several decades.   Early in her career, she worked to help protect the Raritan River while at the Watershed Institute of the Stony Brook Millstone Watershed Association.  As the NY-NJ Baykeeper from 2011 until early 2018, Debbie was instrumental in improving legislation to limit negative impacts from stormwater and combined sewer outfalls into the region’s waterways, and the creation of oyster reefs in Raritan Bay as a key strategy to help improve water quality.  Baykeeper also worked closely with Middlesex County, numerous local governments, citizens groups, and other non-profit organizations to preserve key parcels of open space throughout the Lower Raritan watershed.  Earlier in her career, Debbie served as environmental advisor to Governor Jon Corzine.   In February of 2018, she was named Deputy Commissioner of the NJ Department of Environmental Protection. In that role, she will be in a position to implement sound environmental policies that will benefit the entire watershed.

For the past 23 years, a team of Raritan Headwaters staff members and volunteer citizen scientists has collected samples of benthic macro-invertebrates and habitat data at over 63 sites on streams and rivers in the Upper Raritan Watershed Region (WMA8) of Hunterdon, Morris and Somerset Counties. Through the stream monitoring program, RHA gathers and shares valuable, usable data about surface water quality and the overall health of our watersheds. The data are used to inform NJDEP and USEPA as to whether streams in the region are attaining the standards set by the Clean Water Act.

After RHA conducts its visual assessment and collects a sample at each site, the samples are analyzed by a state-certified laboratory to assess water quality and stream ecosystem health, the data is presented as a High Gradient Macroinvertebrate Index Score.  Sites may be classified as excellent, good, fair, or poor.  When biological monitoring indicates an impairment, they investigate local land uses and conduct further testing to better understand the problem, then work with landowners and local officials to address the problem.

Captain Paul Eidman has been a steadfast protector and steward of the marine species that use Raritan Bay and its surrounding waterways. Through his daily time on the water and work with Reeltherapy, Menhaden Defenders, and Anglers Conservation Network, he has called attention to the diminishing population of several key fish species, including river herring, menhaden, and eels that use the Raritan.

Captain Eidman has championed these and other marine species through a series of lawsuits aimed at overfishing by commercial harvesters and at weaker-than-needed protection of key species by federal natural resource agencies.  He was lead plaintiff on three lawsuits, and along with his co-plaintiffs, recently won a decision that forced the National Marine Fisheries Service to reconsider classifying blue-back herring as a threatened species.

Work to protect herring and other anadromous fish species populations by Captain Eidman is critical in its own right, especially when viewed in conjunction with the great on-going progress in removing dams and impediments to historic anadromous fish runs on the Raritan River.

“It is wonderful to see such an abundant and diverse range of conservation activities throughout the length of the Raritan River being undertaken by so many.  On the Lower Raritan both ecosytem and economic progress hinges on forcing polluters to clean contaminated sediments,” said Greg Remaud, Baykeeper and Chief Executive Officer, NY/NJ Baykeeper.

The Awards Committee for this year’s awards included, Michael Catania, Executive Director of the Duke Farms Foundation, William Kibler, Director of Policy for the Raritan Headwaters, and Greg Remaud, Baykeeper and Chief Executive Officer of NY/NJ Baykeeper.  All three of the organizations that they represent are members of the Sustainable Raritan River Collaborative, a growing network of over 130 organizations, governmental entities and businesses in the Raritan River region working together to balance social, economic and environmental objectives towards the common goal of restoring the Raritan River, its tributaries and its estuary for current and future generations.

Rutgers University launched the Sustainable Raritan River Initiative in 2009 to bring together concerned scientists, environmentalists, engineers, businesses, community leaders and governmental entities to craft an agenda that meets the goals of the U.S. Clean Water Act to restore and preserve New Jersey’s Raritan River, its tributaries and its bay.  The Initiative, a joint program of the Edward J. Bloustein School of Planning and Public Policy and the School of Environmental and Biological Sciences, partners with other Rutgers schools, centers and programs to ensure the best contributions from the sciences, planning and policy.