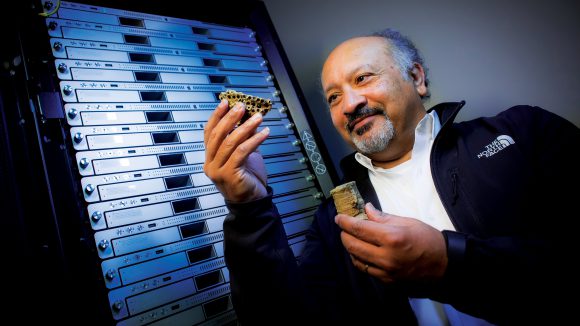 Debashish Bhattacharya, distinguished professor in the Department of Biochemistry and Microbiology.

Coral reefs make up less than one quarter of 1 percent of the marine environment, but their importance to the oceans cannot be overstated. Though they take up relatively little real estate, they’re home to more than 25 percent of all known marine fish, says the World Wildlife Federation (WWF). And they’re currently under multiple threats, the largest of which comes from climate change.

When the waters warm, corals undergo a process called bleaching. Essentially, the corals become too warm to support the algal populations that live on them, and they expel those algae. The coral then loses its vibrant color. While it’s not dead at that time, bleaching turns the coral completely white and leaves it more vulnerable to additional stress and mortality. If bleaching happens long enough—or often enough—the coral can die. This is currently happening worldwide on a large scale.

But there is hope. The research of Debashish Bhattacharya, Department of Biochemistry and Microbiology, is centered on how coral deals with environmental stress. The hope is that these findings can help inform protections for the population going forward. “We’ve done analysis of how higher temperatures and low pH levels impact the growth and physiology of the coral,” he says, “as well as how the entire coral animal itself deals with these conditions.”

By working with collaborators from the University of Hawaii, Bhattacharya has been able to attain samples of both resistant and vulnerable populations of coral that endured a bleaching event. “If you want to understand how they withstand stress and how they can do so going forward, we must look at the genome of the animal, the algae on it, and the bacteria that makes up the microbiome,” he explains. “We want to sequence the metagenomes of these samples and figure out which bacteria were present and which have confirmed resistance to stress. We also want to know how that microbiome changes during the stress period.”

Bhattacharya is also a member of a special committee formed by the National Academy of Sciences, tasked with the challenging job of determining what can be done to save the corals in U.S. territories and states amidst warming waters. From transplanting the coral to new places and figuring out how they deal with stress, to identifying the most resistant corals that can be used as source populations, no solution is off the table. Bhattacharya, as a genomics specialist, will work to provide a review of the current research in these areas, to see if there is a way forward in using genomic resources and knowledge to address the issue of coral resilience amidst climate change.