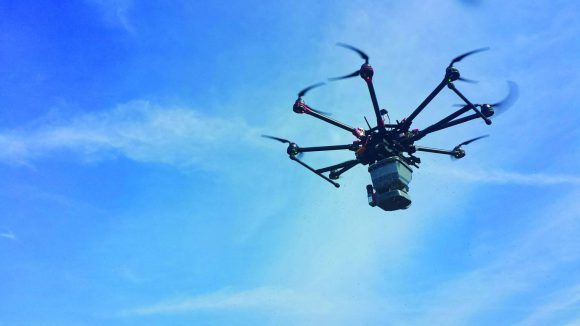 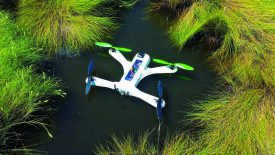 When Greg Williams, Department of Entomology, first started using drones to control mosquito populations, the focus was on larger machines that could spray pesticides over large swaths of land. Today, the approach has evolved to focus on smaller drones. They’re cheaper, easier to fly, and can be used for much more than spraying. In fact, most programs are interested in using them to find water in places that would be hard to reach or see otherwise, for example, if there’s a large marsh with 12-foot brush. Drones can not only find these mosquito-rich areas, but they can also drop larvicide tablets to treat individual pools pretty easily. Plus, they’re helping with research, Williams adds: “We’ve developed a float for the drones that allows us to land on the surface of the water and, using a camera, see the mosquitoes, and then pump them into a vial for identification.” 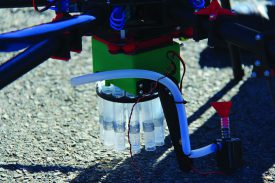 Close up of larval collection unit.

Before he began using drones to monitor New Jersey’s cranberry bogs, Peter Oudemans, Department of Plant Biology, used satellite imagery. But its low resolution left much to be desired. Today, drones provide a resolution so clear that Oudemans can literally count cranberries from a bird’s eye view. One way he’s harnessing this technology is in disease control and, specifically, a disease called fairy ring that grows about 45 centimeters per year in radius. “We can evaluate different ways to treat these rings and prevent them from killing off the cranberry bog,” he says. “We can assess progress from one year to the next by taking georeferenced images and comparing them over time.” 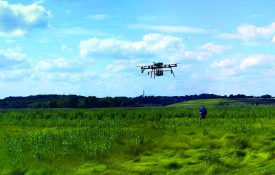 It started when Hugh Roarty, Department of Marine and Coastal Sciences, spotted a newspaper article reporting that Long Branch lifeguards wanted to integrate drones into their lifesaving operations. He met with them, and gathered their wish list: drones that could carry a camera to gather information on where a rescue is needed, be able to communicate with someone in distress, and drop a life vest. Currently, Roarty’s prototype is able to do all but communicate (finding a speaker that’s light enough to fit on a drone but loud enough to overcome the noise of the drone is proving to be a challenge). Still, he thinks the prototype is viable for the market; it’s able to perform reconnaissance, drop a life vest, and cut rescue response time by over a minute.

Editor’s Note: this article originally appeared in the fall 2017 edition of Explorations.